In the blockbuster slice of movie cheese Independence Day, one plot hole that always irked me was the lack of... 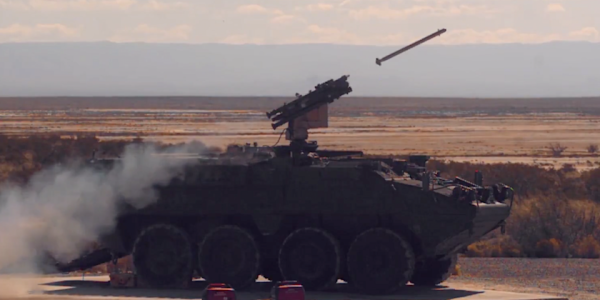 In the blockbuster slice of movie cheese Independence Day, one plot hole that always irked me was the lack of surface to air missiles in the fight against the invading aliens. There is exactly one scene where an Avenger SAM system swivels towards the alien menace as the mothership approaches the secretive Area 51. What garbage is this?

It’s as if the writers of Independence Day knew years in advance that the end of the Cold War would yield a major short-range air defense gap for the U.S. Army, a problem that would only rear its head in the real world in 2016. After some kick-ass testing, the Army recently awarded a contract to Leonardo DRS to outfit General Dynamics Land Systems Strykers with an air defense system armed with Raytheon Stinger missiles to knock potential enemies out of the sky. The program hopes to have four battalions of IM-SHORAD modified Strykers in the field by 2022, per Defense News.

The Stryker platform was chosen for the Interim Maneuver-Short Range Air Defense system because it could be quickly modified to fit the new Leonardo DRS system, a feature GDLS touted when it unveiled Hellfire- and 30mm- enabled Strykers vehicles at AUSA in October 2017. The Stryker also is more survivable chassis than the Humvee, which was originally used for the Avenger surface to air missile system.

Leonardo DRS has been chosen to provide the mission equipment package (rendering pictured) atop a Stryker combat vehicle to serve as the Interim Maneuver-Short-Range Air Defense system for the U.S. ArmyCourtesy of Leonardo DRS

But until that day comes, the fine folks at White Sands Missile Range in New Mexico have created a sweet montage of Stinger missiles bringing the pain to various unmanned targets. Indeed, one of the main concerns that brought about the return of SHORAD requirements is the threat of drone swarms being used by Russia to attack NATO forces, a challenge that induced GDLS to whip up the laser-enabled Stryker MSL variant that U.S. Army Europe soldiers are currently testing. (Ironically, Rusia has felt this pain in Syria itself due to low tech drone attacksagainst Latakia airbase in recent months.)

Providing a better capability for U.S. forces to defend against complex aerial attacks seems prudent in an era of European tension. Because even if we don’t have to worry about city-sized motherships, we do have to worry about Mother Russia in eastern Europe.