The Army has been set on a brand new Mobile Protected Firepower (MPF) vehicle for months. Designed to give the... 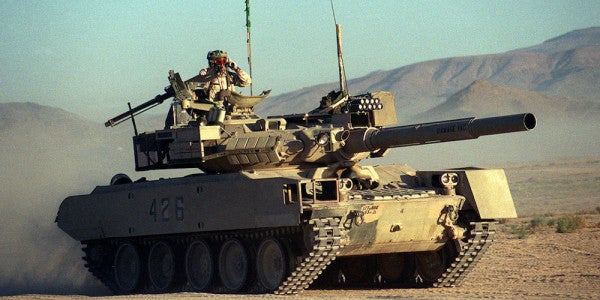 The Army has been set on a brand new Mobile Protected Firepower (MPF) vehicle for months. Designed to give the standard Infantry Brigade Combat Team a rolling fire-support platform without relying on a detachment of heavy armored vehicles, the MPF tops the Army’s wish list — and the service is officially kicking things up a notch.

Program Executive Office Ground Combat Systems, the Army’s main provider of weapons-laden ground vehicles, plans to issue a final request for proposals (RFP) in mid-November for the MPF after receiving feedback from defense contractors, PEO GCS chief Maj. Gen. David Bassett announced on Oct. 25. Under the plan, MPF proposals would be collected by March 2018, and sample vehicles would be expected for testing by April.

And while the next-gen MPF won’t get a formal contract until fiscal year 2019, Bassett noted that the armored-vehicle program has bypassed the traditional, tangly, multi-year development process.

PEO GCS wants to “do acquisition differently to deliver capability quickly,” Bassett said, referring to Army Chief of Staff Mark Milley’s call for increased lethality and readiness as part of the branch’s new modernization roadmap. “My task is what can I do to meet the chief's No. 1 priority, which is readiness,” Bassett said.

“We expect to be delivering prototypes off of that program effort within 15 months of contract award,” he added, “and getting it in the hands of an evaluation unit six months after that — rapid!“

In this photo from 1986, M551 Sheridan light tanks cross the desert during an Opposing Forces exercise at the National Training Center, California. The M551 left regular service in 1996.

The MPF is probably best described by the National Interest as “a light tank” (“I don't want to say it's a light tank, but it's kind of like a light tank,” project lead David Dopp said, according to an Army release). Specific requirements for weapons and armor are scant — you try reading through these draft RFPs — but defense contractor Leonardo DRS described the basic needs detailed by Army officials at a trade conference last year: “a light and nimble vehicle with the ability to accompany infantry troops where much larger main battle tanks are unable to effectively operate – narrow streets, thick jungle, mountainous terrain among them.”

The new vehicles, he added, “must be able to carry enough armor to fend off medium caliber fire, IEDs, as well as heavier anti-armor weapons.”

Bassett didreveal on Oct. 25, however, that the MPF test vehicles “could very well have a 105mm gun up top” on a swiveling turret, not unlike the beloved M1 Abrams tank.

A August 21, 2014, Army Maneuver Center of Excellence (MCoE) Mounted Requirements Division document presented in advance of the Center’s 2014 Warfighter Conference at Fort Benning, Georgia. The MCoE is working on an MPF capability to support both airborne and non-airborne IBCTs, although airborne would be supplied initially, should the program receive all necessary approvals and funding.

The MPF program was established to fill a gap left by the retirement of the 82nd Airborne Division’s M-551 “Sheridan” armored recon vehicle in 1996 and end of the M-8 Armored Gun System program, according to the National Interest. In the latest edition of the Army’s Combat Vehicle Modernization Strategy, published in 2015, the service complained about a lack of “tactical and operational mobility once deployed” — a major obstacle facing infantry currently pivoting to multi-domain battles that require upgunned Strykers with SHORAD capabilities.

“The infantry BCT lacks a lightweight combat vehicle that provides mobile protected firepower (MPF) to enable freedom of movement and freedom of action, which are essential to expanding a lodgment and preventing enemy counterattack,” the report states. “This vehicle is essential to defeating local fortifications, point defenses, and blocking positions to maintain momentum. Without the combat vehicle, the infantry BCT requires reinforcement with heavier armored vehicles for close combat against capable enemies.”

Last year, Army officials presented their vision for the MPF program; it was influenced “a lot from the Marine Corps and programs like JLTV” in its initial requirements, Bassett told the National Interest last May.

Related: The 4 Largest Tanks Ever Built (And One That Remains A Twisted Dream) »

The MPF “will provide protected, long-range, direct fire capabilities to the IBCT to defeat enemy prepared positions, destroy enemy armored vehicles, close with the enemy through fire and maneuver, and ensure freedom of maneuver and action in close contact with the enemy,“ according to Lt. Gen. Michael E. Williamson, principal military deputy to the assistant secretary of the army for acquisition, logistics and technology, in testimony before the Senate Armed Services Committee on April 5, 2016.

The MPF program remains in the initial stages. While Bassett bragged that the Army’s armored-vehicle projects are picking up steam, there’s no target date that PEO GCS is racing to hit. (PEO GCS officials did not immediately provide answers to specific inquiries from Task & Purpose.)

“The Next Generation Combat Vehicle” — a different program from the MPF, it’s worth noting — “won't be fielded in 2022,” Bassett said. “I'm interested in what we can do in the meantime.”