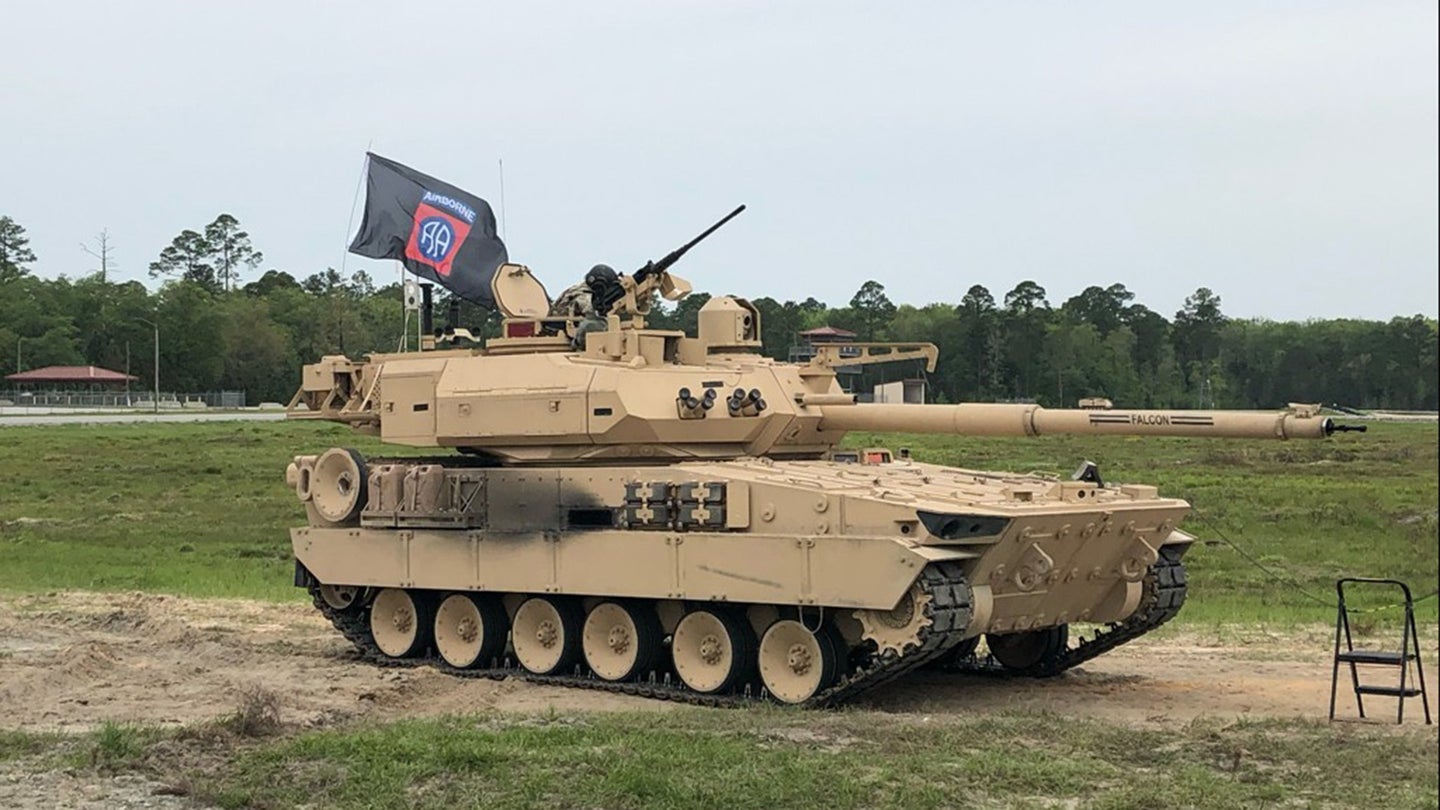 The Army recently awarded a contract for nearly 100 light tanks, but rather than calling them “tanks,” the service is using the term Mobile Protected Firepower vehicles.

To be fair, tankers always bristle when someone mistakenly refers to a Humvee, a Bradley Fighting Vehicle, or a Paladin self-propelled howitzer as a tank. But the Mobile Protected Firepower vehicle sure as hell looks like an actual tank.

Made by General Dynamics, the MPF is a tracked vehicle, and its armaments include a 105 mm main gun, a coaxial 7.62 mm machine gun, and an externally mounted .50 caliber machine gun. It weighs about 38 tons, compared with the M1 Abrams main battle tank, which weighs in at more than 70 tons.

The MPF is meant to be light enough that two of the vehicles can be loaded onto a C-17 Globemaster III transport aircraft. The vehicle is meant to replace another light tank, the nearly 17-ton M551 Sheridan, which was so light that it could be flown by a C-130 transport plane or even airdropped.

The Stryker Mobile Gun System was meant to fill the void left after the Army retired its last Sheridan light tanks 25 years ago, but in May 2021 the service decided to get rid of those gun systems after a review found “obsolescence and systemic issues with the system’s dated cannon and automatic loader,” an Army press release says.

Yet the question remains: If the MPF walks like a tank and quacks like a tank, is it a tank or some other sort of vehicle? A 2019 Army news story describing the MPF consistently put the term “light tank” in quotation marks when referring to the vehicle.

“Infantry Soldiers are closer to getting their hands on a ‘light tank’ that will boost the firepower of their formations without slowing them down,” the story said.

The author went as far as to make sure the term “tank” appeared in quotation marks within a quote: “We haven’t put a ‘tank’ in a light infantry unit for a long time,” Maj. Gen. Brian Cummings, program executive officer for ground combat systems said at the time.

A December 2021 essay published by The Association of the United States Army contains the answer to the riddle behind the Army’s reticence to describe the MPF as a tank.

“Originally referred to as a light tank, Army officials named the new concept the Mobile Protected Firepower (MPF); this approach was intended to dissuade service members from viewing it as a tank-like vehicle and then employing it the same way as the M1 Abrams Main Battle Tank (MBT),” Army Lt. Col. Ben Ferguson and Capt. Lennard Salcedo wrote.

While the MPF certainly looks a lot like a tank, it is not meant to have all the same missions as an M1 Abrams battle tank. Armored formations can be used as battering rams to smash through enemy lines. Most importantly, main battle tanks can destroy enemy armor.

“MPF is not designed to be able to engage enemy tanks,” said Ashley John, a spokeswoman for the Army’s Program Executive Office Ground Systems. “As part of an IBCT [Infantry Brigade Combat Team] formation, MPF is designed to provide direct fire to engage with/destroy the types of impediments typically faced by infantry, such as bunkers. As Army Leaders stated this week, the name given to MPF best describes what it is: it is a mobile platform that provides protected firepower to the infantry.

The Army is starting to buy MPFs at a time when the reputation of tanks in general has taken a hard hit. A senior defense official told reporters in May that the Russians had lost nearly 1,000 tanks since invading Ukraine in late February. That war has also provided a plethora of painful evidence that Russian tanks are so badly designed that their ammunition will likely explode, blowing off the turret, if they are hit.

Meanwhile, the Marine Corps deactivated its last active-duty tank battalion last year as part of a massive restructuring effort to make Marine units light and nimble enough to fight a modern day-island hopping campaign against China. The massive M1 Abrams proved to be too heavy for the Marine Corps’ concept of Expeditionary Advanced Base Operations.

However, China’s People Liberation Army has a lot of tanks in its arsenal, according to the Defense Department’s latest report on Chinese military power Although up to 40% of its main battle tanks are between 20 and 40 years old, it still has 6,300 tanks overall.