Why is it that General Mattis is so beloved? Why would dozens of Air Force personnel, soldiers, and civilians let their own meals grow cold just to shake his hand? 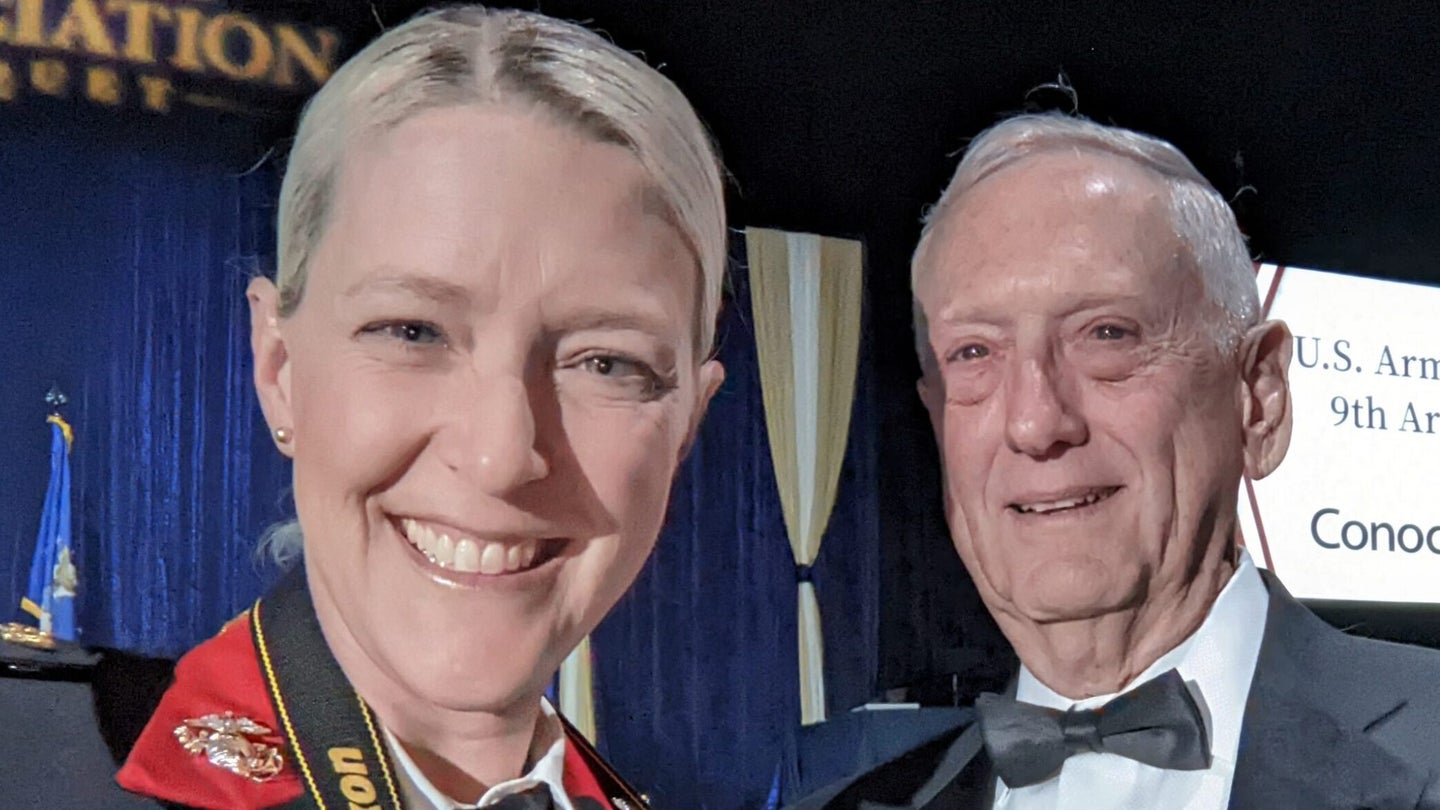 The author in a selfie with James Mattis in Fairbanks, Alaska (Eve Baker).
SHARE

Since May 6, when word of his upcoming visit was splashed across the front page of the local newspaper, the town of Fairbanks, Alaska, had been abuzz with talk about former defense secretary and living Marine Corps legend Gen. James Mattis. He had been invited to serve as the keynote speaker for the town’s annual Military Appreciation Banquet, and to the excitement of everyone, he had accepted.

As a civilian public affairs specialist for the Army assisting with the coordination of the event, I had the privilege of attending, and the retired Marine Corps officer inside me was ecstatic at the possibility of getting to meet him.

Like all Marines, and many other service members, I have a bit of a case of hero worship concerning the general (I am firmly aware that his highest held position was defense secretary, but he will always be a Marine, and for ease of reference in this article and brevity, he is most commonly referred to as the general). When I e-mailed the details of the banquet to my garrison leadership, I half-jokingly referred to him as the honorable Saint James Mattis, an epithet which was transferred directly to the garrison commander’s calendar for all on the staff to see.

As the formal event approached, there was not even a question in my mind about what I would wear — Marine Corps mess dress. As that particular piece of flair cost me approximately $1,200 back in 2015, I had kept it carefully bagged in my closet since the last and only other time I had worn it, and it was still in pristine condition. I wondered whether Mattis would be wearing his uniform too and if he would notice and maybe be willing to take a photo with me.

On the evening of the banquet, I wandered around the facility with the other photographers, taking photos of my boss and other military and civilian guests. I spotted the general seated across the aisle with other illustrious guests and took a photo from a respectful distance.

And then, the moment I had been hoping for since May 6 occurred: Mattis spotted me. Before the event, I had been thinking at best I might get a head nod and polite smile and perhaps have the chance the wait in a receiving line for a formal photo, but I was in for quite the surprise.

Once Mattis saw me in my Marine uniform, his face lit up with a broad smile, and he stood up and waved me over!

General Mattis, the Warrior Monk, bearer of four stars, and former Secretary of Defense of the United States, was seated at a table full of prestigious guests, surrounded by other tables packed with high-ranking military and civilian personnel, but he saw a fellow Marine, a lowly, retired reservist, and wanted to greet me.

I am not sure how I made it the 15 feet across the floor to his side, I may have floated. We shook hands, and he asked me if I was stationed up here and what I did, and how I liked life at 40 below zero. I then took a leap of faith and asked if I could take a selfie with him, fully prepared to be politely rejected by him or someone he was with, like a nearby state trooper.

“Of course!” he said. We took the shot, and I thanked him, also mentioning my retired Marine husband was also there and would love to meet him too, and he said to bring him by later.

Unfortunately, the general would be mobbed for the next 30 minutes by a long line of people that formed between the tables also hoping to shake hands and get a photo. The emcee of the event had to rearrange part of the ceremony so Mattis could actually eat his now probably cold meal before taking the stage to speak. The emcee stated that had never actually happened in the 40+ years of the event.

Why is it that General Mattis is so beloved? Why would dozens of Air Force personnel, soldiers, and civilians let their own meals grow cold just to shake his hand?

It is because he can relate to everyone, from a brand-new private to heads of state, and makes everyone feel respected. He held virtually every military position of leadership there is over his 44-year career and a litany of positions in the civilian realm after his retirement from the Corps. He is exceptionally well-read and can converse comfortably on a vast array of topics.

Despite being truly deserving of a quiet retirement, he continues to accept regular speaking engagements. At the Fairbanks event, numerous people were spotted holding up their phones to record his every word when he finally took the stage towards the end of the evening.

He is perhaps best known and celebrated by Marines for his blunt remarks while on active duty, for statements like, “I come in peace. I didn’t bring artillery. But I’m pleading with you, with tears in my eyes: If you fuck with me, I’ll kill you all.”

But it is his remarks on remarks on respect and compromise, urging people to work together and treat each other with kindness and compassion that cross the military-civilian divide.

“We enjoy America’s freedom by either the action of birth or immigration, yet we all live free in this land by our own choice,” Mattis said during his keynote address. “It’s our responsibility to show respect and genuine friendship to each other as fellow citizens, including those — especially those — with whom we may disagree…Ladies and gentlemen, our country is going through a tough time right now, but we will find a way back to the center. We will find a way to come back to being friends with one another, to be respectful with no more contempt for one another, and accepting that sometimes people have different ideas about where the country should go.”

So many Marines alive today would follow Mattis to the ends of the earth, and after his visit to Fairbanks, it is clear that a whole lot of other people would too.

Eve Baker is a retired Marine major and a current civilian public affairs specialist for the Army.