These heavily armed trucks can pick up anything — including salvaged Russian guns. 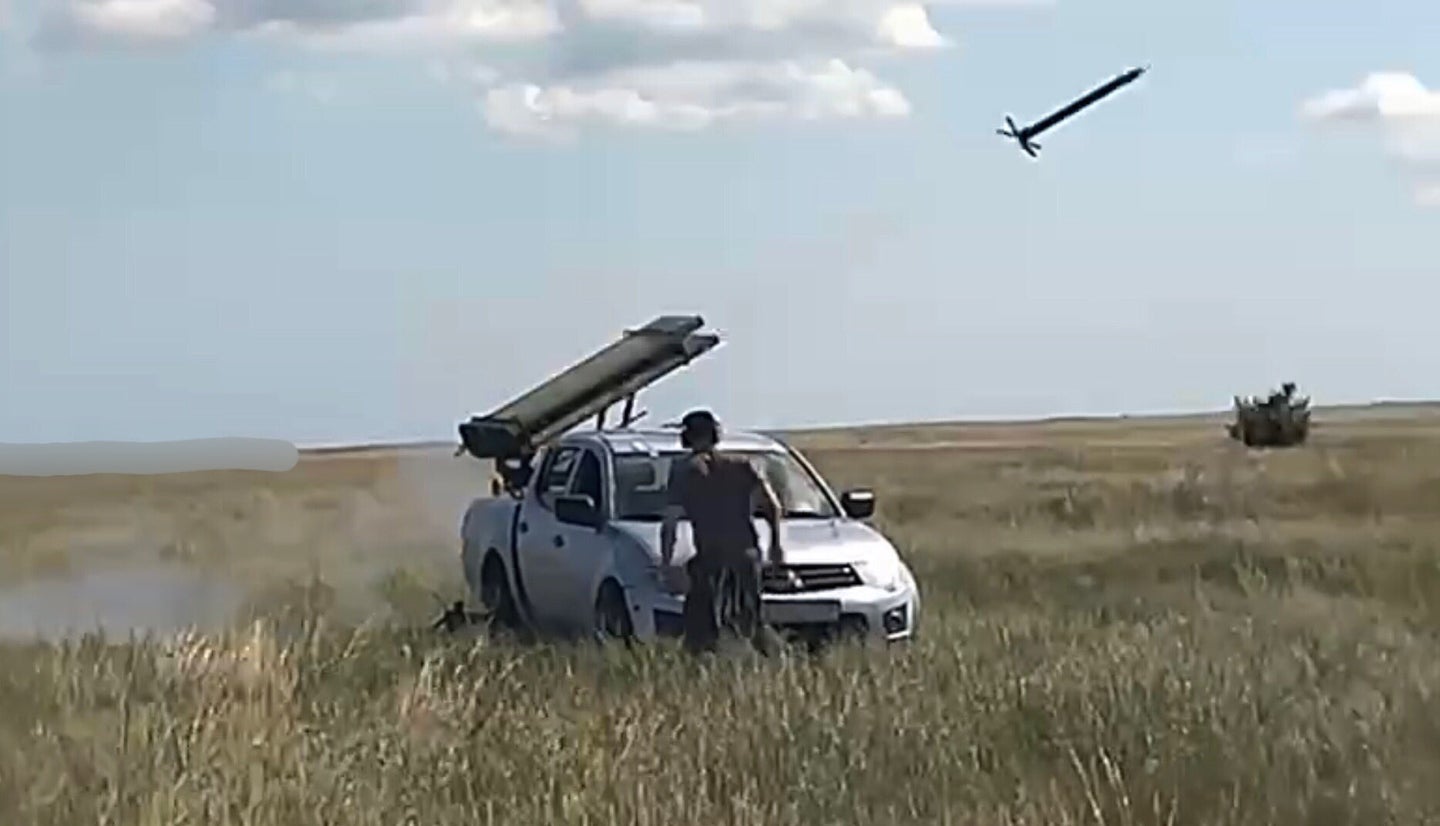 A Mitsubishi L200 technical in Ukraine outfitted with a rocket system. (Image via @bayraktar_1love on Twitter).
SHARE

The war in Ukraine has been dominated by the amount of machinery that’s been brought to it. It’s a large conventional war, with Russia fielding hundreds of tanks and recent fighting in Ukraine’s eastern regions turning into an artillery slug fest. Ukraine has received dozens of new weapons, from Stingers and Javelin missiles to large howitzers.

However, a cheaper, smaller piece of equipment has become a backbone of the Ukrainian forces: the humble technical.

These cars (usually in the form of pickup trucks) are outfitted with armor and guns and have become a common sight in the war in Ukraine. What technicals lack in armor and artillery power, they make up for in speed, maneuverability and ease of repair. Compared to a T-72 tank, a Toyota pickup is cheap and there are a plethora of spare parts.

There are also plenty of cars for Ukraine to convert to fighting vehicles. Business Insider reported this past week on an international team – led by a Ukrainian esports analyst of all things – bringing in cars from around Europe and retrofitting them with weapons and armor. The most desired cars are Mitsubishi L200s, the Ford Ranger and the Toyota Hilux, the latter a car infamous for its durability. The cars are given armor and a weapon, ranging from a Javelin anti-tank rocket to a machine gun, is put on the back.

And the technicals being fielded by Ukrainians also feature a truly wild array of weapons. Seriously.

There are drones, multi-rocket launch systems, machine guns salvaged from destroyed Russian vehicles and more. Videos and images from the war have shown these trucks moving fast on the battlefield and firing their weapons onto Russian positions. On Thursday, The War Zone reported on Ukrainians putting a remote controlled weapons system on the back of a Soviet-era Volga. The gun itself is vintage Soviet weaponry, the control system is modern.

Arming trucks and other vehicles isn’t a new idea. It most famously was used in the last stage of the 1978-1987 war between Chad and Libya. That phase of the conflict became known as the Toyota War (or the Great Toyota War depending on who you ask), thanks to France supplying Chadian forces with approximately 400 Toyota Hiluxes, which were then mounted with guns and anti-tank missiles. They were so effective Chad not only forced Libya out of the country and seized a major air base, Chadian troops launched an assault into Libya, all while gunning it in Toyotas. It was possibly the most Mad Max-like military operation of the 20th century.

And yes, Libyans learned from this, with technicals becoming a major tool in the Libyan Civil War and subsequent chaos in the county. Some even took it to new levels; in April 2019, a Libyan militia was spotted fielding a Humvee with a gigantic 90mm gun mounted to it.

In Ukraine, the technicals are providing quick and mobile firepower to the country’s defense forces. In the initial phase of the war, Ukrainians were able to inflict massive damage and casualties on Russian troops in part due to small arms tactics and urban warfare that eventually repelled the Russian push to Kyiv. Hundreds of tanks have been destroyed or disabled, with some Ukrainians in Mariupol even repairing damaged ones to field against the invaders. Over the last two months the fighting has shifted to a heavy artillery war in the eastern Donbas and Luhansk regions, with Ukraine being bolstered by new Western weapons. But the technical still is on the field, proving that ingenuity and creative mechanics can be effective as well.