A Libyan militia rigged a Humvee with a monster 90mm cannon

Just look at this beast. 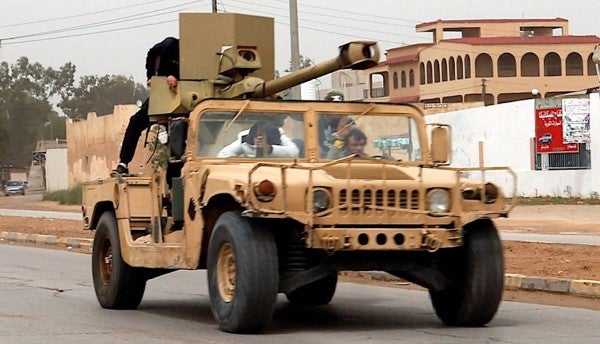 There’s really only one message you can send when you roll up in your neighborhood with a 90mm cannon on the back of your vehicle: I have come here to chew bubblegum and kick ass…and I’m all out of bubblegum.

A Humvee with what appears to be a heavily-modified turret from an armored car was spotted cruising through the Libyan town of Wadi al Rabith just south of the capital of Tripoli back in April 2019.

The turret appears to be ripped from a French-made Panhard AML-90 armored car that’s capable of firing D921 90 mm explosive shells at targets up to 1,500 meters away.

The operators of this battlewagon were identified by Reuters as members of militias from the western city of Misrata that, under the protection of Tripoli’s forces, have clashed with eastern Libyan National Army forces near the capitol in recent days in what the Washington Post characterized as “the most significant escalation of violence in the country” since the 2011 toppling of dictator Muammar Gaddafi.

Those militias, allied with Libyan Prime Minister Fayez al-Serraj against LNA leader and former Gaddafi general Khalifa Haftar, “rushed to Tripoli from Misrata in pickup trucks fitted with machine guns” to rebuff the advance of LNA forces towards the capitol, Reuters reported on Monday.

The Toyota-borne technical has become a well-documented fixture of irregular conflicts across the Middle East and North Africa, and the ingenuity that goes into them is deeply impressive. In 2014, War on the Rocks noted that Libyan engineers in particular have managed to mount even the most mismatched weapons systems on their pickups, from a Soviet BMP-1 Armored Personnel Carrier to S-5 rocket pods that were originally designed for aircraft.

But here’s a question: Given that the Humvee was designed as a military-specific vehicle, does jury-rigging a 90mm cannon make it a technical, you know, technically? Feel free to leave your thoughts in the comment below.