Rep. Gallego: Shanahan’s involvement in a ‘cover-up’ of the Niger attack is disqualifying

"Everything we're seeing right now is basically a cover-up that's occurring at the Pentagon and among general officers." 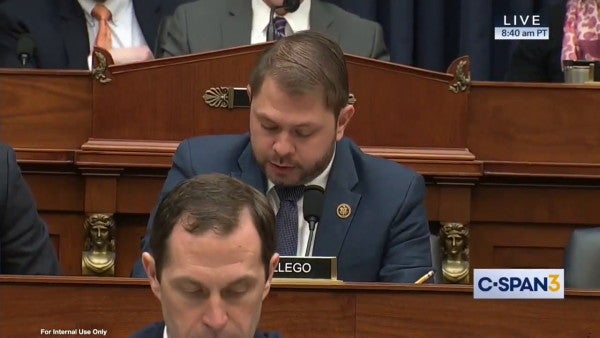 Rep. Ruben Gallego (D-Ariz.) is urging senators to vote against Patrick Shanahan's nomination as defense secretary, claiming Shanahan has mishandled an investigation into a 2017 ambush in Niger that left four U.S. soldiers dead.

“He should be worried about what lessons we could have learned from this Niger ambush and also who were the general officers that were responsible for making these big mistakes that cost these men's lives,” Gallego told Task & Purpose on Thursday. “We as a public have a right to know that and he is part of the problem and not the solution.”

A Marine infantry veteran, Gallego also noted that no senior leaders have been disciplined following the ambush.

“Everything we're seeing right now is basically a cover-up that's occurring at the Pentagon and among general officers,” Gallego said.

In March, Shanahan announced he had ordered a new review into the matter after Gallego pressed him about why the families of the four fallen soldiers had not received redacted copies of the investigation into the ambush nearly two years after the fact and why the Pentagon had failed to tell Congress which of the investigation's recommendations have been implemented.

“To the families: I'm not trying to delay a report,” Shanahan said in April. “When I undertook the role, I wanted time to review the investigation, and really this is just an expedited way for me to make sure I have enough time to understand the reports and the details, so I expect this to go very, very quickly.”

But Gallego said he has been underwhelmed by Shanahan's promises to complete the review quickly. He questioned why the Pentagon is withholding a completed investigation that was ordered by former Defense Secretary James Mattis.

“The only benefit, obviously, of the new review is they are at least getting outside the chain of command of Africa Command and actually have somebody look at this independently,” Gallego said. “But at the same time, why have you not released the initial review?”

Shanahan's spokesman Army Lt. Col. Joe Buccino told Task & Purpose on Thursday that the latest Niger review is expected to be completed within the next two weeks, after which Shanahan will disclose its results.

But Gallego has other objections to Shanahan's nomination as defense secretary. In a statement issued on Thursday, he urged senators not to confirm Shanahan, whom he accused of leaving vacant positions in the Pentagon unfilled and serving as “the man at the helm for the Department of Defense's unconstitutional theft of resources for Trump's dumb border wall.”

“What's in the long-term best interests of the Department of Defense and our armed services, I think, we should have someone who is more independent from Donald Trump than this man,” Gallego said.

UPDATE: This story was updated on May 9 with comments from Army Lt. Col. Joe Buccino.