During the 38th annual Technology Exhibition in the country's capital of Accra, a notoriously shady Ghanian auto magnate rolled out what appear to be, ostensibly, powered exoskeletons designed to give the warfighter of the future the edge 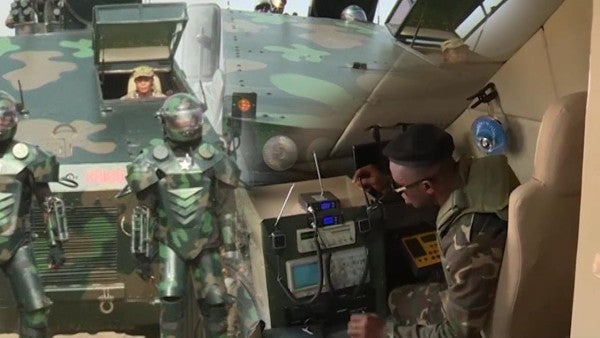 Ever since Robert Heinlein introduced the world to the fascist future of intergalactic warfare with 1959's Starship Troopers, the world has been fixated on seeing the powered armor he envisioned become a reality.

Heinlein's powered armor comes in many shapes and sizes. Call it an exoskeleton like the U.S. Army does or an 'Iron Man' suit like the minds behind U.S. Special Operations Command's Tactical Assault Light Operator Suit occasionally do. But everyone loves the idea of skimming enemy territory with jet-assisted leaps and bounds, your Y-rack firing out small H.E. bombs every couple hundred yards while looking like, in Heinlein's words “a big steel gorilla, armed with gorilla-sized weapons.

The bizarre garbage pile that the Ghanian military trotted out last month is the complete opposite of that.

During the 38th annual Technology Exhibition in the country's capital of Accra, a notoriously shady Ghanian auto magnate rolled out what appear to be, ostensibly, powered exoskeletons designed to give the warfighter of the future an edge. First spotted by The War Zone, the kits are apparently comprised of shoulder-mounted automatic rifle turrets (think War Machine), gauntlet-mounted arm cannons, and bright green armor panels held together by a latticework of hydraulic tubes.

At first glance, the rig almost —almost — looks like an up-armored version of the Interceptor Multi-Threat Body Armor System used by the U.S. armed forces in the 1990s.

But let's be real: This get-up actually looks like someone spray-painted a bunch of cardboard and a motorcycle helmet and slapped them on some poor idiot on parade. This isn't powered armor; it's a shitpile on par with Iran's latest stealth fighter.

Then again, why am I surprised? As The War Zone expertly points out, the man behind these contraptions appears completely batshit insane:

It certainly says something about the man behind these creations, The Apostle Dr. Kwadwo Safo Kantanka, founder of both the Kantanka Group of Companies and his Pentecostal Church, the Kristo Asafo Mission of Ghana. A 2016 Jalopnik profile on Katanka and his automotive interests, which is worth reading in full, makes it clear that its unclear why and when he dubbed himself an apostle or started referring to himself as a “doctor.”

In addition to the automotive arm, Kantanka Group has a long history of producing similar military “innovations,” including a wooden “attack helicopter” and something that defies description and has features that appear ripped from an airplane and a trailer-mounted anti-aircraft gun. Even the vehicles that look more realistic in their basic design have obviously fake weapons and other “advanced” features.

I respect the moxie it takes to trot out some military-industrial spectacle. But when it comes to actually making the powered armor of your dreams a reality, The Apostle Dr. Kwadwo Safo Kantanka is no Robert Heinlein. Hell, he's not even a Tony Stark; if anything, he's probably a Justin Hammer:

SEE ALSO: This Powered Exoskeleton Is Here To Make Ruck Marching A Breeze

WATCH NEXT: You Can Finally Watch The Army's 'Third Arm' Exoskeleton In Action