Ricks: All I Want For Christmas Is A New Secretary Of Defense

And so Mattis goes. It was probably inevitable after his former subordinate John Kelly was said to be leaving his... 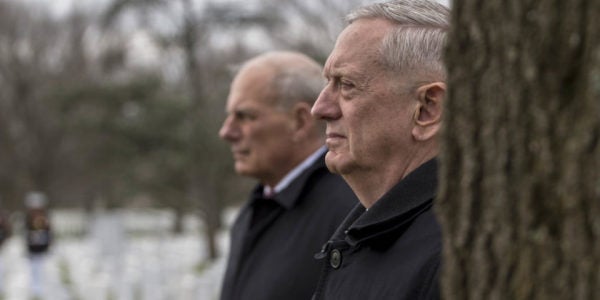 And so Mattis goes.

It was probably inevitable after his former subordinate John Kelly was said to be leaving his post as White House chief of staff.

President Trump announced on Thursday afternoon the departure of James Mattis as defense secretary. I am sorry to see him go — in one of the most turbulent cabinets in American history, Mattis has been something of a rock.

I think Trump’s decision to pull out of Syria probably was the last straw for him. Not just the unilateral nature of it, antagonizing European allies, but also the fact that it almost certainly was contrary to Mattis’ view of what needed to be done in the Middle East.

The odd thing is that this is the second administration in a row that has ousted Mattis over his views of what needs to be done in the Middle East. The Obama White House thought Mattis too obstinate in asking “what next?” questions about Middle East policy, and also in pushing for tough responses to Iranian moves in the region. The Trump Administration — well, it looks to be doing about the same thing for the same reasons.

It also means that all the generals Trump brought into the administration — Michael Flynn, H.R. McMaster, Kelly, and Mattis — will have left within two years.

So Mattis heads back to the food bank in Richland, Washington, where he worked before being tapped to be defense secretary. I am sure he feels relieved at the prospect, and also that he did the best he could for his country as long as he could.

My real worry is who succeeds Mattis at the Pentagon.

I’ve heard Sen. Tom Cotton of Arkansas mentioned. I know little about him but I do like that he served in the Army and did deployments in Iraq and Afghanistan. Iraq in 2006 was pretty rough — I actually was embedded with the 101st Airborne a bit then, but I don’t recall running into Lt. Cotton.

Cotton would be vastly preferable to John Bolton, the national security advisor, and a man I consider to lack judgment.