Ash Carter Confirmed As The New Secretary Of Defense

On Thursday afternoon, the Senate confirmed Ashton Carter as the secretary of defense in a 93 to 5 vote. Carter... 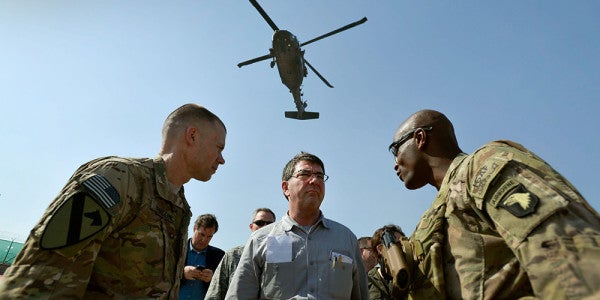 On Thursday afternoon, the Senate confirmed Ashton Carter as the secretary of defense in a 93 to 5 vote. Carter weathered a mild storm during the Senate Armed Services Committee hearing, Feb. 4, at least compared to the grilling his predecessor Chuck Hagel took. Carter is expected to be sworn into office sometime next week, and will be President Barack Obama’s fourth secretary of defense over his two terms.

Carter, the former deputy secretary of defense under Hagel, holds degrees from both Yale and University of Oxford, in medieval history and theoretical physics, and is an expert on nuclear weapons. He is widely regarded as a budget maverick, which is arguably something we desperately need in the Pentagon. Carter has also had a foothold in the Pentagon for decades. Though arguably, his nomination and any dissenting opinions have less to do with him, and a lot more to do with the president and his administration.

During his Feb. 4 review with the Senate Armed Services Committee, Carter answered questions on how he would handle a wide range of issues — or rather, he answered questions on how the White House sought to resolve these problems, and whether or not he would buckle to pressures, with a key sticking point being the administration’s desire to expedite the transfer of prisoners from Guantanamo Bay.

It is likely that Republican Sen. Kelly Ayotte of New Hampshire was thinking of the infighting between Hagel and the White House when she candidly asked Carter if he would stand against administration pressures to speed up the release process.

“You will commit to this committee and to all of us that you will not allow the release of someone that you think could re-engage in terrorism so that our men and women in uniform will be confronted with them again?” asked Ayotte.

“I do, senator. As in everything else I do, I’ll play it absolutely straight,” was Carter’s curt response.

However, there seems to be a sense of resignation regarding the position and the secretary’s ability to actually influence policy.

“He will manage the Pentagon, and he will do a good job at it, he has significant experience,” said Sen. John McCain, who chaired the committee. “But there’s no possibility that he will have anything to do with the formulation of national security policy or strategy.”

When asked if he would consider “putting boots on the ground” to combat threats posed by the Islamic State in Iraq and Syria, or if he felt there could be a peaceful resolution in Syria with Assad still in power, Carter toed a careful line saying only, “In formulating my advice, I will not hesitate to consider all options.”

Regarding the increasingly volatile situation in Ukraine, Carter recommended sending assistance to Ukrainian forces, specifically the sale of lethal arms to help the country fight off the Russian-backed forces.

As the incoming secretary prepares to take charge of his new post, the country will watch and wait as a very talented and skilled politician attempts to succeed in the least desired job inside the Beltway.