A group of Iraqi lawmakers have apparently joined #TheResistance over U.S. President Donald Trump's short visit to American troops outside... 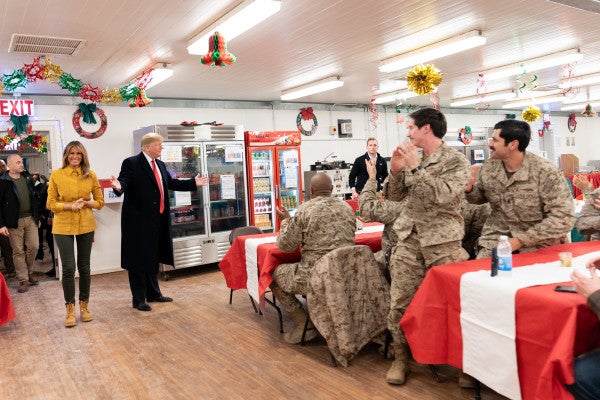 After Trump stopped in to shake hands and take selfies with American soldiers, some Iraqi lawmakers made it known they were pretty pissed about not getting a heads up.

According to Reuters, Sabah al Saadi, the leader of the Islah parliamentary bloc, called for an emergency session of parliament “to discuss this blatant violation of Iraq’s sovereignty and to stop these aggressive actions by Trump who should know his limits: the US occupation of Iraq is over.”

Meanwhile, the Bina bloc — Islah's rival — also put out a statement calling Trump's visit “a flagrant and clear violation of diplomatic norms and shows his disdain and hostility in his dealings with the Iraqi government.”

Now, a lot of this is just politicians politicking. You've got a bunch of Iraqi lawmakers who are just waiting around for an opportunity to bitch about anything so they can look good to their constituents. Just like Sen. Chuck Schumer (D-N.Y.) would gladly criticize Trump for eating pizza with a fork and knife if it would make a good attack ad, Iraqi politicians know their best bet is to shit on America whenever possible.

So, anyway: How dare the president travel to Iraq and not tell us ahead of time so that news could leak to insurgents!

Other than the potential political controversy among Iraqi lawmakers, Trump also didn't meet in person with Iraqi Prime Minister Adil Abdul Mahdi over security concerns, since the White House only gave him a two hour heads up and he was in a totally different part of Iraq.