You may have heard that President Donald Trump recently posted a video revealing a “covert” Navy SEAL Team in Iraq,... 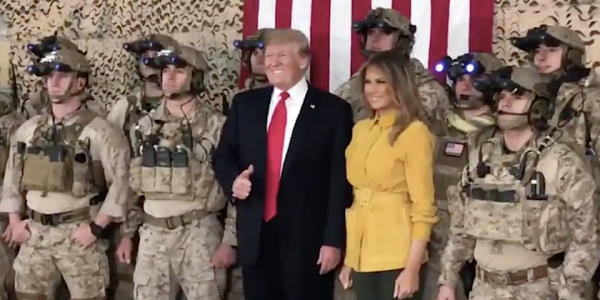 You may have heard that President Donald Trump recently posted a video revealing a “covert” Navy SEAL Team in Iraq, and well, that's kinda bullshit.

“After Air Force One left the Iraqi airspace, Trump posted a video to his Twitter account of his time spent with American forces during his visit to Iraq,” Newsweek reported. “Lee Greenwood’s 'God Bless the USA,' plays over the video and shows the president and the first lady posing for pictures with service members that appear to be from SEAL Team Five. The special warfare operators are dressed in full battle gear and wearing night vision goggles. … The video cuts to team members shaking the president’s hand before cutting to other special operations personnel and support troops.”

The Newsweek article itself isn't completely off base. The Pentagon hardly posts pictures of SEALs to its official visual imagery portal anymore and rarely talks about special operations units or deployments over operational security concerns.

But the headline on the Newsweek article, with the term “covert,” is what many people have taken issue with, and for good reason (it's worth noting here that most news organizations don't let authors choose their headlines, so this may not be LaPorta's fault).

“Is it a secret that these guys are out there in that part of the world? No,” a defense official told Task & Purpose on condition of anonymity. “It’s been a little more sensationalized than we would've hoped.”

“Covert” has a very specific definition under Title 50 of the United States Code, which makes it a matter of intelligence authority, focused primarily on the activities of state organs like the Central Intelligence Agency (with some input from the DoD); this is a direct contrast to Title 10 of the USC, which deals solely with military authority. Title 10 “is used colloquially to refer to DoD and military operations,” as the Harvard National Security Journal puts it, while Title 50 “refers to intelligence agencies, intelligence activities, and covert action.”

While the two authorities detailed under Titles 10 and 50 aren't mutually exclusive, forces operating under Title 10 are explicitly prohibited from carrying out covert operations, instead relegated to clandestine activities which involve “the tactical concealment of the activity” and don't require an explicit notification of Congress, according to an April 2018 Congressional Research Service report.

“By comparison, covert activities can be characterized as the strategic concealment of the United States’ sponsorship of activities that aim to effect change in the political, economic, military, or diplomatic behavior of an overseas target.”

As it stands, the vast majority missions carried out by U.S. special operations forces are non-statutory clandestine operations under Title 10 rather than explicitly (and legally) covert operations under Title 50; OPSEC, in the case of the former, is usually designed to conceal an operation for tactical purposes rather than fully embrace the level of plausible deniability usually referred to spies. In this context, the only true “covert” operation carried out by U.S. special operations forces was the SEAL Team 6 raid on Osama Bin Laden's compound in Abbottabad, Pakistan, in 2011.

Simply belonging to a SEAL Team doesn't make your every move “covert,” especially if you're hanging out in the DFAC during the commander-in-chief's visit.

All of this is to say that if SEAL Team 5 was deployed to Iraq on a covert mission, there's no way in hell anyone, including conventional U.S. forces, would likely know they were there. I mean, Lt. Lee, the SEAL chaplain, was identified as a member of SEAL Team 5 in the public pool report and photographed by Agence France-Presse. No commander on an actual “covert” mission would ever let that happen, no matter how amped they are to hang out with the commander-in-chief, given the gravity surrounding Title 50 activities; even letting personnel engage with the commander-in-chief in public completely negates the plausible deniability that supposedly comes with covert operations.

This may seem like a pedantic argument, but it's an important one, especially for matters of civil-military engagement. But make no mistake: Revealing the identities of SOF personnel is still bad news, even if they're not tasked with a real “covert” mission.

“Even during special operation demonstrations for congressional delegations or for the president or vice president, personnel either have their faces covered or their face is digitally blurred prior to a release to the general public,” as one DoD official told Newsweek. “I don't recall another time where special operation forces had to pose with their faces visible while serving in a war zone.”

On the upside, at least nobody left a whiteboard with troop movements sitting in the background.

U.S. Special Operations Command and Naval Special Warfare Command did not respond to requests for comment from Task & Purpose.

SEE ALSO: These Troops Hanging With President Trump In Iraq Are Ready To F*cking Operate, Bro