“The fight is really shaped by artillery in this phase.” 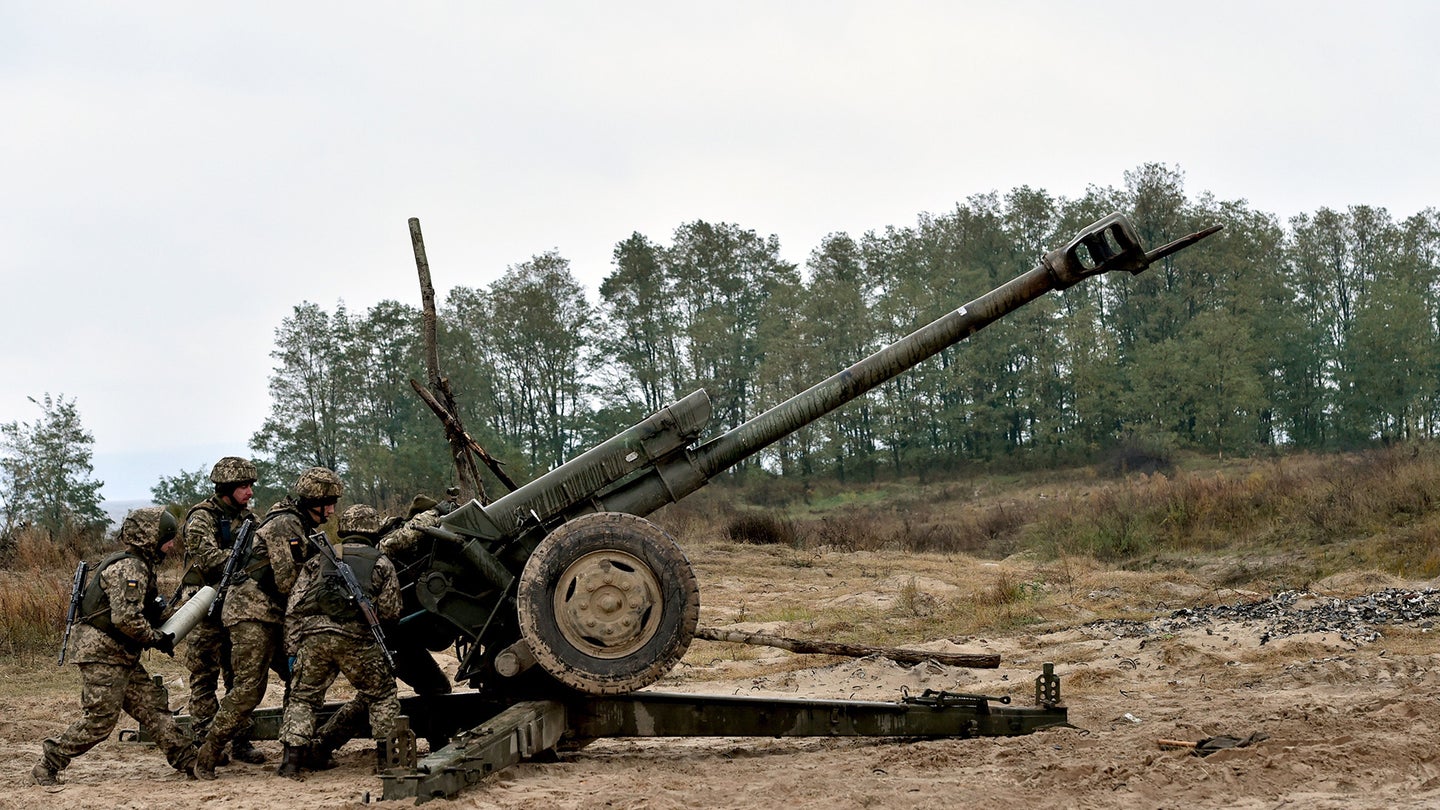 Ukrainian gunners fire from the artillery guns during military drill on the shooting range not far from the small city of Divychky, some 80 km from Kiev on October 26, 2017. (Sergei Supinsky/AFP via Getty Images).
SHARE

Of the 550 Russian soldiers who attempted to cross the river, more than 400 are believed to have been killed on May 11 and the Ukrainians also managed to destroy the Russian force’s pontoon bridge along with armored vehicles on both sides of the river, the New York Times reported, citing unnamed Western military analysts.

The debacle also freaked out Russia’s military bloggers, who decried how easily Russian forces had fallen prey to the Ukrainians, according to the Institute for the Study of War research organization in Washington, D.C.

“The attempted river crossing showed a stunning lack of tactical sense as satellite images show (destroyed) Russian vehicles tightly bunched up at both ends of the (destroyed) bridge, clearly allowing Ukrainian artillerymen to kill hundreds and destroy scores of vehicles with concentrated strikes,” the institute wrote as part of a May 14 assessment of the war in Ukraine. “The milbloggers who have hitherto been cheering on the Russian military criticized Russian armed forces leadership for failing to learn from experience in the war.”

This incident is an example of how effectively the Ukrainians are using artillery, including the 90 M777 Howitzers provided by the United States, to grind down and stop Russian attempts to break through the front lines. However, it is unlikely that any of those howitzers were used to stop the Russians from crossing the Siverskyi Donets on May 11 because those guns began arriving in Ukraine afterward.

Ukraine is also getting artillery and ammunition from Canada, Italy, Greece, Norway, and Poland.

“The fight is really shaped by artillery in this phase,” Defense Secretary Lloyd Austin told reporters on Monday. “And we’ve seen serious exchanges of artillery fires over the last several weeks.”

Artillery has been one of the most decisive weapons used in the Ukraine conflict, said Michael Kofman, a Russian military analyst.

“It’s responsible for stopping Russian advances and has likely inflicted the bulk of the losses,” said Kofman, director of the Russia Studies Program at CNA, a national security think tank.

In the case of the May 11 battle at the Siverskyi Donets River, it appears the Russians had attempted a difficult maneuver known as a “wet gap crossing,” said retired Army Lt. Gen. David Valcourt, who led the U.S. Army Field Artillery Center at Fort Sill, Oklahoma, from December 2003 until August 2005.

Valcourt, whose knowledge of the battle all comes from open sources, said it looks as though the Russians did not use all the capabilities available to them to suppress the Ukrainian’s fire and protect their own forces.

“The Russians apparently put all of their eggs in one basket (one crossing site) which was, unfortunately for them, within both range and observation of the Ukrainian artillery: ‘Ducks on a pond!’” Valcourt told Task & Purpose.

“As a ‘Redleg’ [Army artilleryman] I am personally very proud (as must be ‘Saint Barbara’ Patron Saint of all artillerymen) as to how effectively Ukrainian forces are using their guns and indirect fires linked with multiple targeting sources to punish the Russian aggression and defend their country and Ukrainian people,” Valcourt continued.

The Ukrainian artillery not only destroyed a Russian battalion tactical group – a combined arms formation that typically has between 700 and 800 troops – but it also hobbled an entire Russian brigade, said retired Army Lt. Col. Alexander Vindman, an expert on both Russia’s and Ukraine’s militaries.

“When an artillery strike occurs, if it destroys 50% of the combat power of a unit, that unit is ‘destroyed,’” Vindman said. “In this case, it looks like they knocked out, basically, the entire battalion tactical group. They completely destroyed one battalion tactical group, they also – in so doing – they destroyed the effective combat power of a brigade – the larger element above it – because it can no longer fight as a brigade.”

Since early on in the conflict, Ukrainian forces have shown that they are very good at using spotters and forward observers to target Russian convoys and formations for artillery and mortar strikes, Vindman said.  In March, a large Russian column of tanks reached Brovary, just eight miles from downtown Kyiv, but the Russian tanks were bunched up on a road, providing a target-rich environment for Ukrainian artillery. The Russian attack failed and Kyiv was saved.

Over time, the Ukrainians have become even more proficient with using artillery, and the “hyper-accurate” M777 Howitzers they are receiving will only add to their effectiveness, he said. Vindman said he is not surprised at how well the Ukrainians have used artillery to stop Russian advances. Both the Ukrainians and Russians have traditionally been “fixated on the effective use of fires,” he said.

Another reason why artillery has proven to be so deadly in this war is the terrain itself. The Donets Basin, known as the Donbas, is defined by rivers that feed into a spiderweb of tributaries and ravines, which are all very difficult for tanks to cross, said retired Army Col. David Glantz, a military historian and an expert on the Red Army during World War II.

Not only do tanks have to cross those water obstacles, but the ravines and gullies provide natural cover for anti-tank guns, and because Ukraine is typically very flat, gunners can see enemy tanks from great distances, Glantz told Task & Purpose. This terrain contributed to the horrendous losses the Red Army sustained during their three attempts to recapture the Donbas from the Germans in 1943.

Glantz said he recently reviewed a survey of Red Army commanders taken in 1943 as part of his research for a book he is writing about the fighting in the Donbas, during which a Soviet tank corps would generally lose about 120 of its 200 tanks within a week

“Universally, the commanders of those tank and mechanized corps tasked with breaking into the Donbas literally curse in their reports the balkas [ravines] and the ovrags [gullies] – basically, the terrain that makes using tanks very difficult in terms of where they can move because crossing the darn things is a task. It requires bridging in many cases.”

The Red Army finally took the Donbas in 1943 through attrition. Their tank forces suffered heavy losses but the Germans could not withstand the sheer number of armies that the Soviets threw at them, he said.

“I call the Donbas a graveyard for Soviet armor,” Glantz said.

Nearly 80 years later, Russian President Vladimir Putin’s forces appear to be faring little better. The combination of difficult terrain and excellent Ukrainian gunners have turned the Donbas region into a killing ground, and the hard-learned lessons from the last time Russian forces fought there, appear to have been forgotten.