Russia is hammering Ukraine with up to 60,000 artillery shells and rockets every day

“Instead of a concrete target, the strikes target an entire neighborhood." 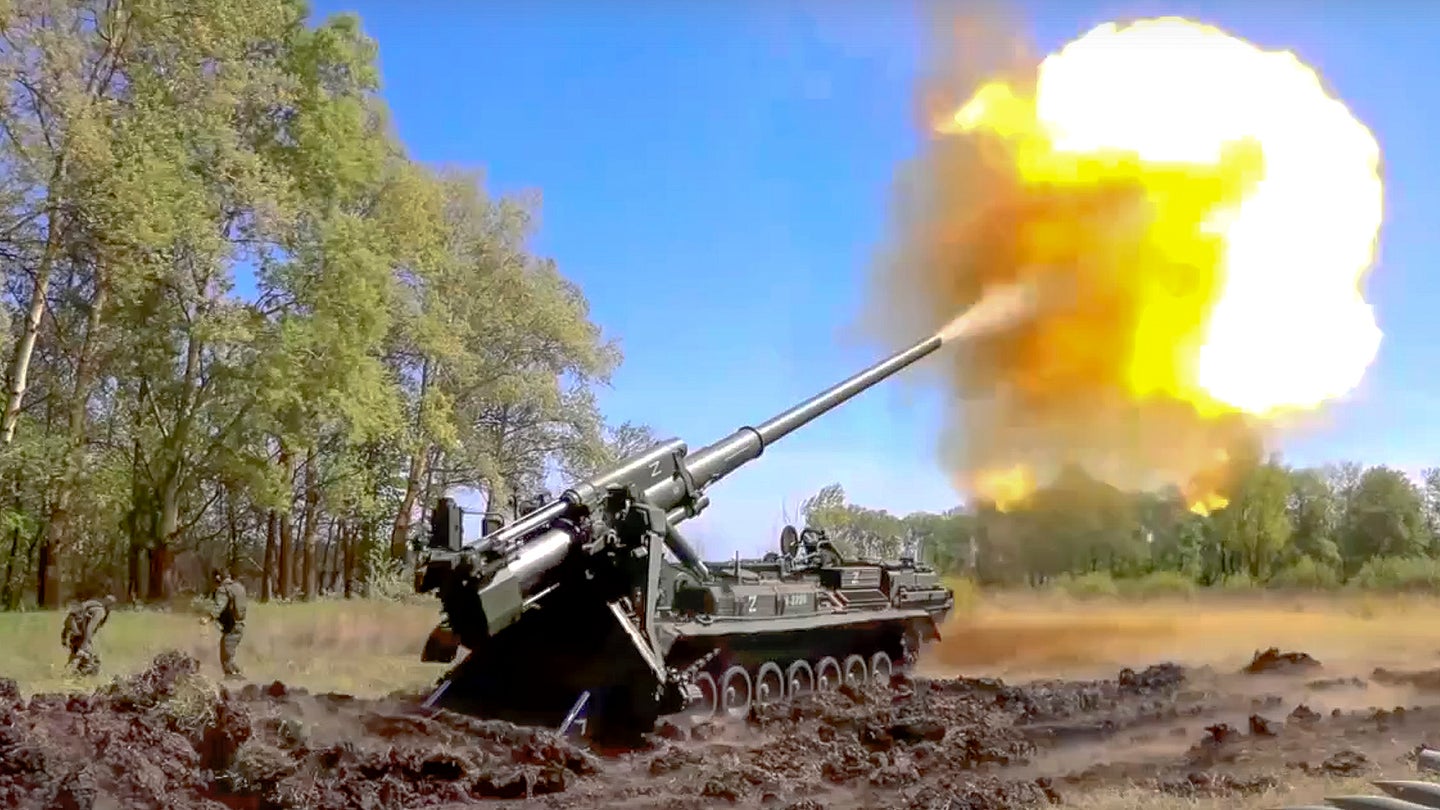 The Russians are using indiscriminate and overwhelming artillery strikes to grind Ukrainian defenders down, underscoring how the Russian military’s approach to firepower prizes volume over accuracy.

The war in eastern Ukraine has been described as an artillery duel, and the Russian military has superior numbers of cannons and rocket artillery systems. Right now, the Russians are currently blasting the Donets Basin – known as the Donbas – with up to 60,000 artillery shells and rockets per day, one unnamed senior advisor to the Ukrainian military told The New York Times recently.

Maksim Fomin, a member of the separatist Donetsk People’s Republic’s forces, has blogged that Russian artillery strikes are intended to obliterate everything in front of them, according to The Wall Street Journal.

“Instead of a concrete target, the strikes target an entire neighborhood or forested area,” Fomin reportedly wrote. “As a result, the advancing units are suffering losses, and cannot move forward until the entire area resembles a moon crater.”

The Russian approach in the Donbas echoes past tactics in Grozny, Chechnya; Aleppo, Syria; and Mariupol in Ukraine, said retired Army Gen. David Petraeus, who led U.S. troops in Iraq during the surge and later commanded all U.S. and NATO forces in Afghanistan.

“When they confront a particularly determined and skillful urban defense, they pound it with artillery, rockets, missiles, and bombs until it is totally destroyed and ‘depopulated,’” Petraeus told Task & Purpose. “They then secure the rubble and move forward until they encounter further determined defenders and repeat the process.”

The war in the Donbas has become so intense that the Ukrainians are reportedly running low on artillery shells even though the U.S. government has committed to providing them with more than 220,000 155 mm artillery shells along with 108 M777 howitzers.

“This is, of course, why the Ukrainians have described this phase of the war as heavily artillery-centric — and why it is so important that the U.S. and other western countries expeditiously provide as much artillery, ammunition, drones, loitering munitions, counterfire radars, multiple-launch rocket systems and rockets, and other relevant capabilities (including trucks to carry the ammo) as the Ukrainians can possibly absorb and employ,” said Petraeus, who also led U.S. Central Command.

The Pentagon recently announced that it will provide Ukraine with four High Mobility Artillery Rocket Systems, which have a range of up to 43 miles. But Mykhailo Podolyak, an advisor to Ukrainian President Volodymyr Zelensky, tweeted on Monday that his country needs 300 multiple-launch rocket systems, 1,000 howitzers, and 500 tanks.

It is not known if Russia’s embrace of massive artillery bombardments in the Donbas indicates that it is having problems with the quantity or quality of its most advanced weapons systems. A senior defense official told reporters in March that a Russian hypersonic missile strike in Ukraine could indicate that the Russians were running low on precision guided munitions.

Moreover, Russia’s hypersonic weapons have turned out to not be as good as U.S. military officials initially thought, Air Force Gen. Glen VanHerck, head of U.S. Northern Command, told lawmakers in May.

“They have had challenges with some of their hypersonic missiles as far as accuracy,” VanHerck testified during a May 18 Senate Armed Services Strategic Forces Subcommittee hearing. “But I would not take away, from a strategic perspective, that Russia’s cruise missiles or hypersonic missiles, their strategic capabilities have severely underperformed, okay? I just want to make that clear.”

It appears the Russians are currently preserving their precision-guided munitions, said Glen Howard, a Russia expert and president of the conservative Jamestown Foundation think tank in Washington, D.C.

In fact, experts are debating exactly how many precision-guided weapons the Russians have left because the Russian military has started using older Kh-22 cruise missiles, which first entered service in the 1960s, Howard told Task & Purpose.

Meanwhile, the Russians are concentrating their artillery fire on a very narrow front to push the Ukrainians out of Severodonetsk, the last city in Luhansk province that is still partially held by Ukrainian forces, he said.

“They’re focusing on a specific sector to break that sector, and they’re focusing all their firepower on that,” Howard said. “That is my impression. And they are trying to break the Ukrainian ranks. But the Ukrainians are very well dug in and the Ukrainians have made a political decision to keep launching counter attacks – so they hide in the basements until the shelling stops and then they begin a counterattack.”

The war in eastern Ukraine also illustrates the stark differences between the Russian and western philosophies on the proper use of artillery, said retired Marine Col. Mike Samarov, who managed a team for planning Russia, Europe, and NATO strategy and policy that advised the chairman of the Joint Chiefs of Staff.

U.S. and western artillerymen go through extensive training so that they can put unguided rounds on target with their first shots, while the Russians lack a professional artillery corps, Samarov told Task & Purpose. Going back to the Soviet Union, the Russians have viewed artillery as a mass area weapon.

“This sort of saturation of grid squares kilometer by kilometer is very consistent with their doctrinal approach on the use of artillery,” Samarov said. “They very much view artillery as a weapon of mass rather than a weapon of precision. It works particularly well when you’ve got large numbers of personnel that are either conscripted or not particularly well trained.”