These photos capture what life is really like in the military

We asked, and you delivered. 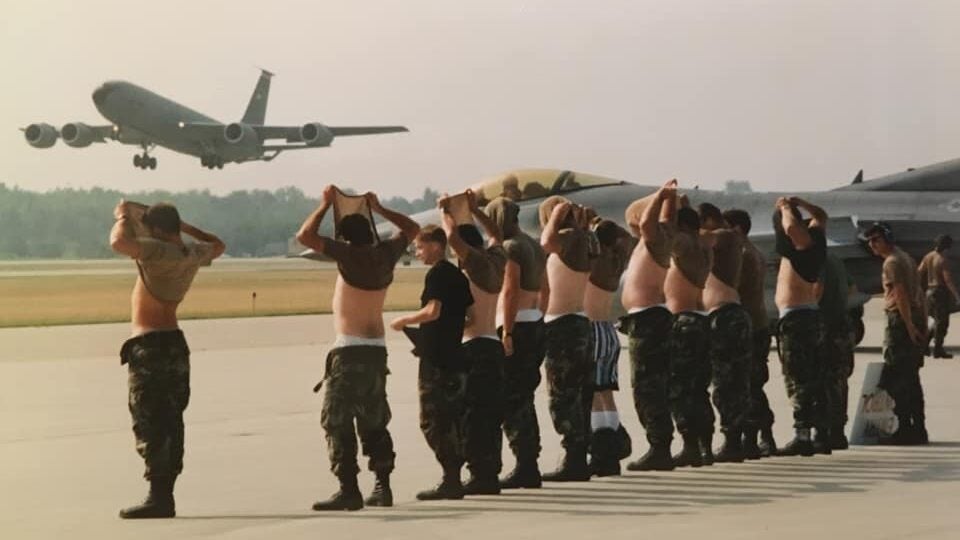 About a month ago we asked Task & Purpose readers for photographs that summed up the highs and the lows of military life, from Skittles in an MRE to having to pull duty on a 96-hour liberty and everything in between. From mud to dust to the bowels of a ship floating somewhere in the Pacific Ocean, our readers delivered.

So here they are.

Here is a submission from Omar Pineda demonstrating a highly valuable skill — sleeping in any condition. This also applies to the Navy, as Charles Webb demonstrates below.

U.S. Army soldier Matthew Curilla probably managed to achieve fame with the E-4 Mafia and infamy among sergeants major by appearing in a headline in The Washington Post with his hands in his pockets following a rocket attack on Al-Asad Airbase in 2020.

Also demonstrating a similar, zen-like level of peace with the world was Adam Christman, caught enjoying both meditation and nicotine in Syria in 2017.

And here is Heather Hennie at Forward Operating Base Lagman in Afghanistan in 2010 demonstrating perhaps the only effective use of the universal camouflage. In use from 2005 to 2019, these were the Army’s uniforms at the height of the surges in Iraq and Afghanistan, but they’re probably remembered most for their inability to camouflage anything…unless you’re covering up a cat with your blouse.

Now, if there are any people thinking, “Back in my day, we had a bit more discipline…” allow us to refer you to Jim Little in Okinawa, circa 1988.

Actually, considering there’s a new Top Gun movie out and the barracks furniture doesn’t look like it’s changed much in 30 years, this photo could probably have been taken a few weeks ago.

The need to hurry up and wait is also apparently eternal, as evidenced by Marine Lynn Guyer, seen here in the Philippines in 1987. Imagine spending a day in the motor pool without a smartphone.

Of course, the desire to flout regulations is not bounded by any rank or service, as Jeremy Ault proved in Iraq in 2009.

The military also teaches you valuable skills, like learning to cope with difficult situations.

Here’s Kat Von Gieson in Balad, Iraq in March 2004, investigating what caused that sewage smell all night. “Working night shift in small radar ops ‘box’ with recirculating air. Really windy one night, start smelling sewage through the air system. Now it’s circulating through the box all night. At the far end of our site two of the porta johns had tipped over & our vehicle ops guys put the big forklift in front to keep the others from blowing over. Nice smell on the walk out that morning.”

That smell might be pretty timeless, though, as this submission from John Stambaugh, taken in Vietnam, demonstrates.

Of course, it’s not all fun and games.

“This picture sums up 24 years of service because during good times, bad times, fun times, and hardships, it was always about service to the USA,” wrote Pat O’Connor of this photo taken in Afghanistan on Sept. 11, 2004.

Army Col. Tom Hanson was an advisor to an Iraqi National Police battalion in Baghdad back in December 2007, when the unit – primarily Shi’a Muslims – played an impromptu soccer match with some local children in the al-Doura neighborhood, a mostly Sunni enclave.

“I served over 28 years in uniform as an enlisted soldier, noncommissioned officer, and commissioned officer. I served in the Gulf War, in Haiti in ’95, and in OIF, among other places. The hope that I saw in these kids’ faces inspired me like nothing I had ever seen before,” Hanson wrote. “These kids made all the ‘suck’ worthwhile.”

But service is often  about taking care of the men and women around you.

Here’s Stephen Rogers and a couple of buddies in 3rd Battalion, 68th Armored Regiment outside Mannheim, Germany in 1981.

And J. Harrison Gindhart at Forward Operating Base Kalsu in Iraq in 2008.

“I’m the goofball in the headlock. This sums up my military service because what matters is the awesome dudes I served with. Friends with most of them to this day and will be to the end,” wrote Gindhart.

So, Army, Air Force, Navy, Marine Corps and even the Space Force, keep sending us pictures that capture everything you love and love to hate about the military. The comments section is a short downward scroll away.