“I think in Special Tactics we just expect this of our operators and of ourselves." 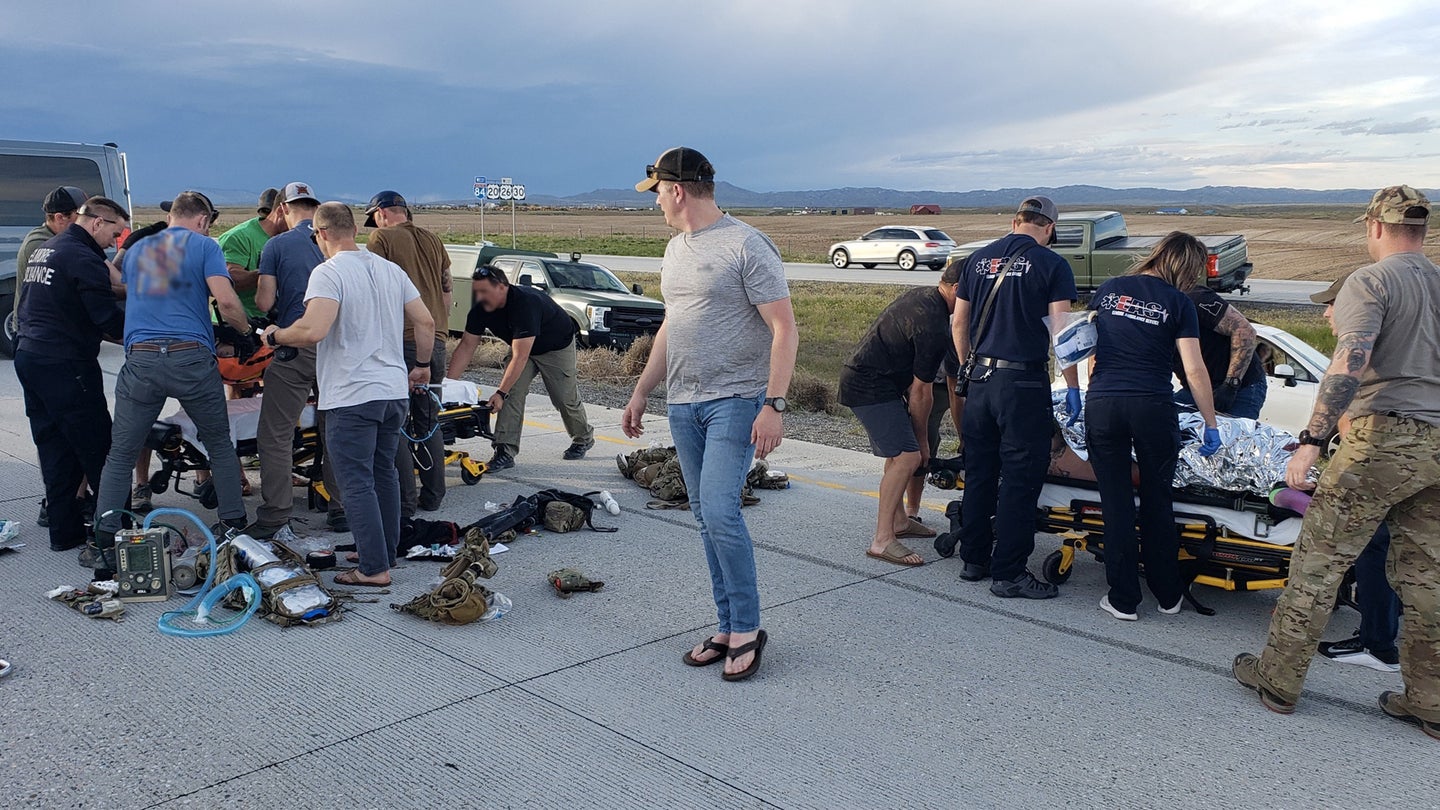 125th Special Tactics Squadron airmen work alongside paramedics to prepare two patients for transport near Boise, Ida. on May 15, 2022. After completing a day of small arms training, these Oregon Air National Guard Airmen were in a convoy heading to Gowen Field, Ida. when an accident unfolded in front of them. (Air Force Courtesy photo).
SHARE

A motorcycle crash in Idaho last month may have turned fatal if not for the arrival of highly-trained special operations airmen. The airmen were driving in a convoy on a stretch of the I-84 highway in western Idaho where the speed limit is 80 miles per hour on May 15 when a motorcycle accident happened right in front of them. The motorcycle with two riders was struck from behind, severely injuring both riders, according to an Air Force press release. But if there was a silver lining, it was the fact that several members of the 125th Special Tactics Squadron, Oregon Air National Guard, were nearby.

“If I was ever in a situation with that bad of trauma, those are the guys I want working on me,” said Senior Master Sgt. Stephen Studenny, the squadron’s senior enlisted leader, in the press release. “Our guys went straight to work, it’s like second nature. You have over a combined century’s worth of combat experience with the medics that we had on the ground.”

Air Force Special Tactics is a term for several special operations jobs in the Air Force. It includes pararescuemen (also called pararescue jumpers or PJs), the elite commandos trained in search-and-rescue and combat medicine; combat controllers (CCTs), the commandos who call in airstrikes and set up landing zones for Army Special Forces, Navy SEALs and other special operations forces; Tactical Air Control Parties (TACPs), who perform a similar mission but with less elite units; and Special Reconnaissance (SR) airmen, elite commandos trained in the use of drones and electronic warfare. The airmen with the 125th Special Tactics Squadron had just finished a day of small arms training when the motorcycle accident occurred. They responded before Studenny, their senior enlisted leader, could order them to.

Some of the airmen didn’t even have time to pull on proper footwear.

“These guys were in flip-flops sprinting across the median ready to flag down traffic and create a roadblock to protect their teammates and the patients,” said squadron commander Maj. Alex Nell. “We had guys that blocked and directed traffic, while their teammates simultaneously moved to triage and treat what ended up being two patients.”

Nell said there were four to five PJs and combat controllers working on each patient, which was good because one of them was in serious trouble. The first had “really bad road rash, likely broken bones, and experiencing shock, but was responsive,” Nell said. The airmen stabilized the patient’s head and set up an IV for giving him or her fluids. The other patient was in much worse shape.

“I won’t get into specifics, but it was bad,” the commander said.

The airmen had to clear and establish an airway for the second patient, stabilize his or her head, neck, pelvis and back for transportation and set up an intraosseous fluid line. Unlike intravenous lines, which deliver fluid and medication into a patient’s veins, intraosseous lines go into the patient’s bone marrow, which is a useful system in emergency situations where responders sometimes can’t get intravenous access. Had the airmen not been there to provide that immediate care, the second patient may not have survived the crash.

“Without a shadow of a doubt, and the ICU confirmed it, one of the patients would have died on scene had it not been for [the 125th Special Tactics Squadron airmen], and the other patient could have easily died from shock,” said Nell.

It also helped that only a week before the accident, the airmen had completed a tactical combat casualty care training refresher and hands-on cadaver training. The two events went over everything from controlling arterial bleeding to establishing airways via cricothyrotomy, which is the procedure for making an incision and inserting a tube through the patient’s throat to establish an airway. It was also a lucky coincidence that the airmen had just conducted small arms training earlier that day, so they had specialized medical equipment in their vehicles with them.

“The fact that those six vehicles just happened to have the equipment, the personnel, and oh by the way the recent relevant training, it’s a series of events that is hard to explain,” Nell said.

The commander was full of pride for his airmen.

“I think in Special Tactics we just expect this of our operators and of ourselves,” he said. “When you take a step back and put their actions into context, this isn’t a deployed theater with combat operations, this is in the middle of Idaho … and if it hadn’t been for the actions of our guys, one person would be dead, potentially two. I couldn’t be more proud of everything they did. Their selflessness and leadership are second to none.”