"They get their mission and they go do it." 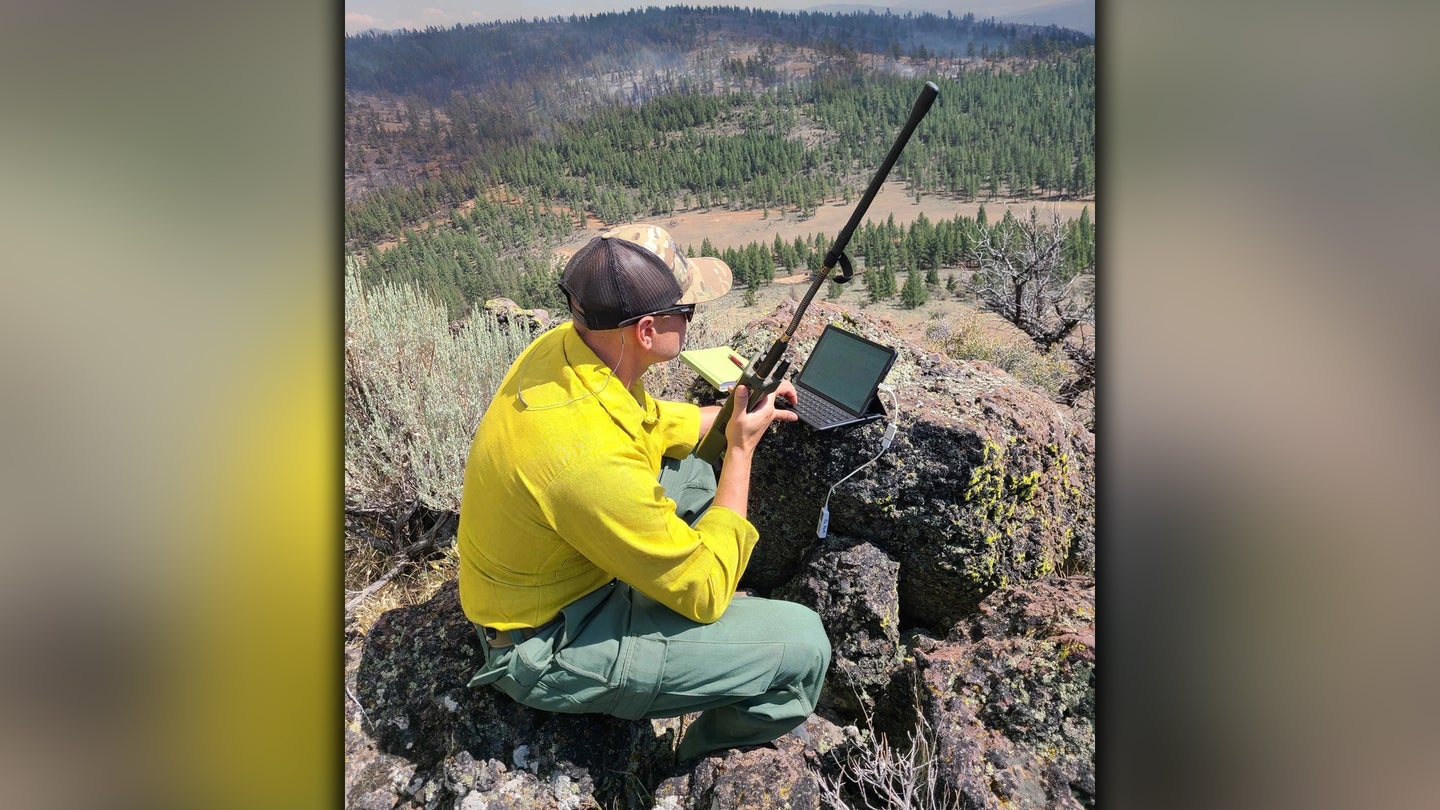 Master Sgt. Brent Hill, Pennsylvania Air National Guard, controls the IR imagery on an RC26 in support of burn operations on the Beckwourth Fire in California from a location in western Nevada July 13. He is serving as part of a team of imagery experts providing live aerial video streaming to fire bosses working on the front lines of the devastating fires. (Air National Guard photo by Staff Sgt. William Gray).
SHARE

Most service members know Air Force Tactical Air Control Party specialists as the airmen who embed with ground units to call down air strikes at just the right place and time to turn the tide of battle. But while fire support is the TACPs’ main mission, they’ve also become indispensable for supporting firefighters while they battle wildfires in California.

Specifically, the TACPs bring live aerial video, images and infrared vision that lets them see through the intense smoke of a wildfire and give firefighters real-time information to help fight the blaze and stay out of danger. It also helps that the TACPs, no strangers to dealing with stressful situations, need only minimal training to adapt their skills to firefighting.

“They are almost plug-and-play,” George Violante, a firefighter and imagery expert with the National Interagency Fire Center, told Task & Purpose. “They gather, they get their orders, they get their mission and they go do it. Typically with new firefighters in a new position, they have to have their hand held for a while. These guys don’t.”

But how exactly do TACPs help fight a raging fire? They don’t call in airstrikes of water and fire retardants, Violante explained. Instead, it starts with an Air Force RC-26 Metroliner, a twin turboprop aircraft that is often used for surveillance missions (sometimes even over American citizens). Once it’s airborne, the RC-26 is guided over a fire by TACPs on the ground.

The RC-26s have a special ability: infrared cameras that let them see through the smoking blaze of an inferno. Oftentimes, you can’t see more than half a mile with all that smoke, said Violante, which makes tracking fires and making decisions on how to fight them much more difficult. While the military is awash in high-tech sensors and cameras that they use to track targets, civilian agencies often don’t have that kind of technology.

“We in the civilian government have very little equipment. It’s costly and we just don’t have the budget yet to make that happen,” the firefighter explained. “We typically rely on the naked eye to make decisions.”

Enter the RC-26 with its infrared vision. But it’s more than the cameras that help: it’s the ability to see what they see in real-time. That’s where the TACPs come in. They use mobile devices linked to specialized radios to create a network between them, the aircraft and the firefighting crews on the ground. That network, called Distributed Real-Time Infrared, allows the crew to see what the fire is doing, if any smaller hotspots are breaking out, and how the weather is affecting it, which is vital information when you’re trying to put it out.

“All that information that is just minutes old is much more valuable than something that’s 12 or even 24 hours old, which is the standard we’re used to,” Violante said. “So this really employs a lot of tip-of-the-spear information that engages everyone to do more and save time.”

One scenario where that network makes a huge difference is a controlled burn, where firefighters intentionally set an area on fire so that the wildfire can’t use it as fuel. These are risky operations, Violante explained, because if the wind is not cooperating or if the terrain is too steep, then some burning material might roll away and encircle the firefighters. In the past, there was not much firefighters could do to keep that from happening.

“A lot of times you’re just hoping it works out great,” Violante explained. “We have people holding the line and gritting, making sure no spots came across the line. But you’re doing that with the naked eye, and a lot of times you don’t see anything until the fire is an acre, and then you have to fight a fire in the middle of another fire.”

The TACPs change all that because they give firefighters a much better sense of what’s burning, where, and what they should do about it.

“From the air, the aircraft can see everything happening behind [the firefighters],” Violante explained. “So it gives them the ability to burn and operate safer, quicker and effectively without being hooked and losing the fire.”

You might be surprised to hear that TACPs, who specialize in calling in airstrikes, are not the ones who call in buckets of water or fire retardants. The reason is because local firefighters already have their own specialists for calling those in. Violante explained that aerial supervisors do the work of managing air traffic and bringing in helicopters or tankers to drop water or retardants. Those air traffic patterns typically hang out at around 10 to 12,000 feet, while the RC-26s fly at 17,000 feet or higher. Basically, the TACPs manage the eyes in the sky while the aerial supervisors work the party downstairs, but the information the TACPs provide often helps the fire bosses know where to drop the suppressants.

“The TACPs can give them [the firefighters] a perspective of what that fire is doing right now and when to engage it,” Violante explained.

This season marks the eighth year TACPs have helped out firefighters in California. They often come from Air National Guard units like those in New Jersey, New York, Illinois, Idaho, Washington, Oklahoma and, for the first time this year, Pennsylvania.

“We are drawn to missions like these — it’s a call to service,” Pennsylvania Air Guard member Master Sgt. Brent Hill, one of the TACPs in California, said in a press release. “This is an amazing opportunity to help save lives and property and use the skill sets we’ve learned.”

In many ways, the mission is similar to the one Hill and other TACPs perform in combat, Hill explained. They observe the area and work with aircraft to provide information to commanders. Only in this case, it’s first responders, and the enemy fire is literally a fire. And as wildfires grow worse every year in California, local firefighters have become increasingly reliant on the Air Force’s help.

“Most of these aircraft are flying to their maximum every day,” Violante said. “We don’t have enough … It is becoming more of a tool that we’re demanding that we get more of.”

Beyond the immediate fire detection and tracking mission, the information the TACPs collect also helps local meteorologists and fire behavior analysts gain a better understanding of wildfires, “which helps everyone else on the fire line in the future,” Violante explained.

Californians are not the only ones who benefit though. The Air Force gets a nice perk too.

“Being able to fight wildfires is a great opportunity for Pennsylvania TACP to use their skills to support a domestic mission,” Maj. Nicole Reigelman, a spokesperson for the Pennsylvania Air National Guard, told Task & Purpose. “Because this is a real world mission, it allows younger TACP to use their training to make a positive change stateside. The PA Air Guard is proud to be able to support this effort.”