The AC-130J Ghostrider, the next-generation gunship the Air Force once dubbed its “ultimate battle plane” and “a bomb truck with... 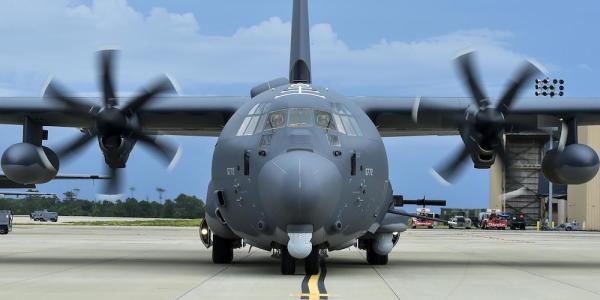 The AC-130J Ghostrider, the next-generation gunship the Air Force once dubbed its “ultimate battle plane” and “a bomb truck with guns,” will be ready to rain hellfire down on unsuspecting enemies by the end of September, the head of Air Force Special Operations Command announced on Sept. 19.

“We are declaring IOC, Initial Operating Capability, this month on the AC-J,” AFSOC chief Lt. Gen Marshall Webb told reporters at the Air Force Association’s annual conference, per Military.com. “This is a fully configured gunship.”

The modified Lockheed C-130J, originally ordered as a replacement for the AC-130H Spectre, was built for aggressive close-air support, boasting a 30mm GAU-23/A autocannon and a suite of precision-guided munitions that include the GBU-39 Small Diameter Bomb and AGM-176 Griffin missile. The weapons systems are governed by modular Precision Strike Package (PSP), previously tested on AC-130W Stinger II aircraft starting in 2009, that includes advanced GPS guidance capabilities and brand-new fire control interface, according to Military.com.

But the crown jewel of the Ghostrider is the brutal 105mm M102 howitzer system, which can fire off 10 50-pound shells a minute with devastating accuracy. A confirmed addition to the Ghostrider in January 2015 after years of debate within AFSOC, the 105mm cannon seems like a no-brainer for the next-gen battlewagon: As one weapons system officer told Air Force Times in October 2016: “It's literally an artillery weapon that we decided to shoot down from the sky, instead of up from the ground.”

If AFSOC gets its way, the 105mm cannon won’t even be the Ghostrider’s most unusual big gun: As of April 2017, AFSOC was exploring experimenting with a directed-energy laser system designed to knock out enemy electronics and disable critical infrastructure. “Without the slightest bang, whoosh, thump, explosion, or even aircraft engine hum, are permanently disabled,” Webb told National Defense magazine of the laser weapon’s potential function during CAS operations. “The enemy has no communications, no escape vehicle, no electrical power and no retaliatory .”

Related: The Air Force Is Preparing To Test A Laser Cannon On The AC-130J Ghostrider »

With 10 Ghostriders in its current fleet, the Air Force plans on purchasing up to 37 total from Lockheed by fiscal year 2021. But despite its new IOC status, the aircraft won’t actually see combat downrange for several years, with full operational capacity by 2025 at the earliest.

Why not send the Ghostrider downrange immediately? Webb cited training delays wrought by the high operational tempo facing special operations forces in countries like Afghanistan, Iraq and Syria — an operational tempo that’s only likely to increase in the coming months. Indeed, Webb told reporters that AFSOC commandos have seen deployment rates beyond those previously experienced by the DoD, with some of the command’s 14,461 active-duty troops deploying more than a dozen times in their careers, per Air Force Times.

“The challenge that we have, it’s my problem, is how do we fight the current fight — we have gunships deployed to Afghanistan, Iraq, Syria — and use those same people to convert into a new weapon system,” Webb told reporters on Sept. 19. “We’re not going to have the luxury of doing what most normal units do.”

But once the timing is right, the Ghostrider is ready and able to do what it does best and rain total destruction down on America’s enemies. And despite the burdens placed on AFSOC by 16 years of non-stop war abroad, the Webb had a simple message regarding the command’s readiness: “We’re not waiting around.”