8 unbelievable stories from the Second Battle Of Fallujah

This time of year marks the anniversary of one of the most storied battles in recent Marine Corps history: the … Continued 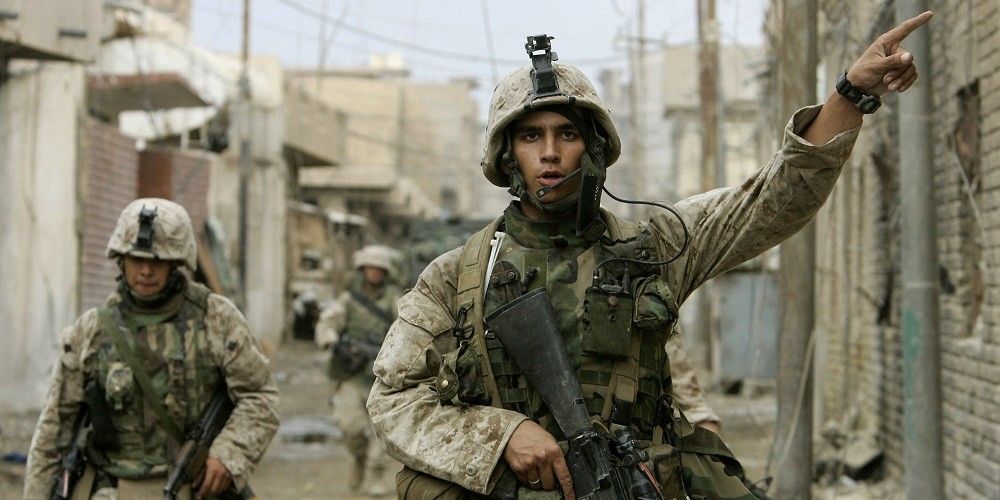 This time of year marks the anniversary of one of the most storied battles in recent Marine Corps history: the Second Battle of Fallujah. The city became the scene of brutal urban combat when American, Iraqi, and British forces launched an all out assault on Nov. 7, 2004, to seize it from Iraqi insurgent hands.

Some of the Marine Corps’ greatest heroes and most recent legends emerged from the battle.

(Editor’s note: This article was originally published in 2015.)

After being severely injured by enemy gunfire, 1st Sgt. Bradley Kasal rolled over to shield a wounded Marine from a grenade blast, absorbing the brunt of the explosion himself. After heroically leading his squad in an attack against a large enemy force inside of a building, Cpl. Dale Burger was severely injured, but returned to his unit just three days later and again led his men back into combat before being killed in action on Nov. 14.

The Marines of 3rd Battalion, 1st Marine Regiment — to which both Kasal and Burger belonged — were the operation’s main effort. They were the tip of the spear.

Over the course of battalion’s eight-month deployment, 33 gave their lives and more than 400 were injured, confirmed Col. Willard Buhl, 3/1’s commanding officer at the time. Of that number, 23 were killed and 275 were wounded during 12 days of intense and unrelenting combat as the Marines fought to take Fallujah from enemy hands. Additionally, more than 250 awards for valor were awarded to the unit’s Marines and sailors for their actions during the operation.

The stories that emerged from that battle are the kind that legends are built on. They’re larger than life and in some cases seem unbelievable.

Task & Purpose spoke with six Marines who served with 3/1 during the battle and asked them to share the most unbelievable things they witnessed during the operation. Here are eight extraordinary moments from one of the most brutal battles of the Iraq War.

1st Lt. Carin Calvin, a weapons company platoon commander, was atop a roof directing fire from his 60 mm mortars section when he found himself in an enemy’s sights, according to Sgt. Maj. David Wilson, who was standing on the roof of a building directly adjacent to Calvin that day.

Right as Calvin bent down to pick up the handset of his radio, he took fire.

An enemy tracer round flew from the east and entered the left armhole of Calvin’s flak jacket, went into the flesh along his back, exiting his body through the opposite armhole. Running roughly one-sixteenth of an inch under the skin, the tracer round drew a vicious line directly underneath his “Marine” tattoo, perfectly underlining it.

The day before Lima Company and the rest of the battalion pushed into the city, one of the tires on the commanding officer’s Humvee popped. As the driver, Lance Cpl. Ian Smith set the jack and began changing the tire, the soft dirt and the blast from a rocket propelled grenade that landed nearby caused the vehicle to fall atop him.

Seeing that Smith was being crushed under the incredible weight of the up-armored Humvee, 1st Sgt. Wayne Hertz and Sgt. Johnnie Lassiter, the turret gunner, rushed to help him. Acting on instinct, the two immediately started trying to lift the vehicle off Smith, recalled Hertz, who retired two years ago as a sergeant major.

Incredibly, they were able to take enough of the weight off of Smith that other Marines, who ran over when they heard screaming, were able to pull the pinned man to safety. After deadlifting an armored truck, Hertz suffered a herniated disc and nerve damage and had to be medically evacuated.

When a Marine was shot between the eyes on Nov. 14, there wasn’t enough time to wait for a helicopter to arrive at his location, explained Lt. Col. Patrick Gallogly, who was the battalion air officer at the time and was on the radio calling for a casualty evacuation. Nor would the wounded Marine be able to survive long enough for a Humvee to make it back to the battalion aid station.

In a race to get the wounded man to the care he needed, an Army National Guard unit loaded the Marine into a M113 armored personnel carrier they were using as an armored ambulance. The Vietnam-era vehicle, which was designed to move through contested and rough ground, raced 60 miles an hour through the rubble-strewn streets of Fallujah before arriving at the train station where the battalion was headquartered. Locking up one tread, the driver deliberately fishtailed the vehicle so it spun around and lined the ramp up with waiting medical personnel. As it turned, the ramp was lowered so the patient could be quickly moved off the vehicle. Despite the incredible efforts to save the critically wounded Marine, he died of his injuries.

On Nov. 16, the Marine advance began meeting heavy resistance along phaseline Isabel — the city was divided into phase lines with male and female names used to denote direction. Faced with a determined enemy that would often boobytrap and mine the buildings they were in, the battalion ramped up its use of air support, and the ensuing barrage earned the nickname “Hurricane Isabel.”

The battalion’s three forward air controllers along with a team of Navy SEAL joint terminal attack controllers worked with Gallogly to call in 35 airstrikes on 24 targets, destroying all but four in the span of six hours. That’s roughly six airstrikes every hour and included attack runs from AC-130 gunships and warplanes dropping 500-pound bombs. The sheer number of airstrikes was anything but typical.

The mad dash of Mike Hanks

On the third day of the battle, Gunnery Sgt. James Conner, then a sergeant, and one of his team leaders, Lance Cpl. Mike Hanks, found themselves moving down a side street alongside Iraqi soldiers and their Marine advisers. Making their way into the courtyard of a two-story building, they came under heavy attack. A brutal gunbattle began, leaving a Marine and an Iraqi soldier shot and trapped in the open courtyard.

As the gunfire subsided, Hanks and Conner could hear the screams of injured men and so they entered and immediately came under heavy fire. Conner dove behind the dead body of an enemy insurgent as Hanks hurled himself behind a lone tree in the center of the yard.

Seeing the two injured men in the open, Hanks sprung into action and darted across the killzone as enemy fire raked past him. Conner, who was laying down suppressing fire, watched as Hanks ran forward, leaned down, and in one fluid motion, grabbed the wounded Marine, threw him over his shoulder and darted out of the courtyard, kicking open a side door. Seconds later, Hanks was back, grabbing the wounded Iraqi soldier and repeating the same movement as Conner laid down suppressing fire.

Hanks returned a third and final time just as another Marine from their squad got a clear line of sight of their attacker, opened fire, and killed the shooter. Hanks was killed a week later on Nov. 17 while providing security and was posthumously awarded a Silver Star for valor.

As the sun came up on Nov. 10, Conner recalled standing with his men as they dressed and ate, while some shaved or took a quick cigarette break when able. Covered in dust, soot, and blood, the Marines stood among the debris and rubble of a city-turned warzone, looking rough and worn, just a few days into the fight.

For about 10 minutes, everything stopped. Marines hugged and shook hands, while others tore into MREs to pull out pound cakes, which they stuck matches in as if they were candles. Marines with information operations played the Marines’ hymn over their loudspeakers and for a few brief moments among all of that chaos, they celebrated their Corps’ birthday.

While Kilo Company was advancing south, Capt. Jonathan Vaughn, the battalion’s judge advocate, was at the rear of the column with the company’s headquarters’ element when they came under attack, recounted Col. Willard Buhl, 3/1’s battalion commander.

Vaughn regrouped the Marines near him, the majority of whom were non-infantry, and coordinated their defense. Leading cooks, clerks, and candlestick makers, the combat judge, as he came to be known, was severely wounded during the battle, losing his ring finger with his wedding band still on it. After being evacuated, his ring was eventually found and returned to him.

The TOW that didn’t go off

In early November, as the battalion’s two sniper teams met up in the evening at a six-story building in Fallujah — dubbed the “flower factory” — Sgt. Matthew Mardan and his fellow snipers took an overwatch position on the building’s top floor. Navy SEAL snipers supporting the battalion had already taken the roof.

According to Mardan, as the rest of the snipers prepared to take some well-deserved rest, he and two other Marines looked out over the city from their vantage point. Suddenly, they took fire from a 25 mm cannon as an Army Bradley fighting vehicle opened fire on their position.

From the vehicle’s vantage point, the gunner likely saw the three infrared silhouettes of men in beanies and buffalo jackets poking their heads over a window ledge and assumed they were enemy insurgents, and not in fact, Marines.

As Mardan and the others yelled over the radio for a ceasefire, there was a sudden thump — which he remembers to this day — as a TOW missile burst through the wall and skidded to a halt, sputtering feet away from the radio and right in the center of the Marines. As they scrambled from the room, the ordnance failed to explode and was eventually detonated in place, taking the building’s upper floors with it.