8 iconic photos from the invasion of Normandy

Here are eight historic photos from the days leading up to, during, and after one of the most brutal battles in contemporary history. 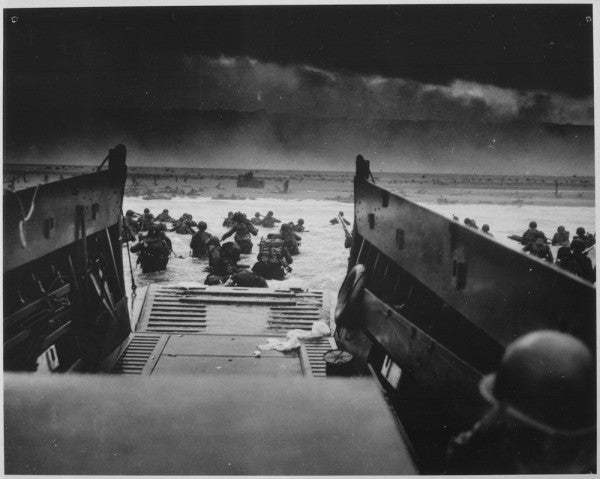 June 6 marks the anniversary of Operation Overlord, commonly referred to as D-Day — it was the single largest seaborne invasion in history and marked a turning point in the fight against Axis powers in Europe.

[Editor’s note: An earlier version of this article was originally published on June 5, 2015.]

Gen. Dwight D. Eisenhower, the supreme commander of Allied forces in Europe, gave this speech just prior to giving the order to begin the operation.

You are about to embark upon the Great Crusade, toward which we have striven these many months. The eyes of the world are upon you. The hopes and prayers of liberty-loving people everywhere march with you. In company with our brave Allies and brothers-in-arms on other Fronts, you will bring about the destruction of the German war machine, the elimination of Nazi tyranny over the oppressed peoples of Europe, and security for ourselves in a free world.

Today, Eisenhower’s words still ring true for the men who fought and died on the beaches, fields, and among the hedgerows of Normandy: “The eyes of the world are upon you.”

Below are eight historic photos from the days leading up to, during, and after one of the most brutal battles in contemporary history. U.S. soldiers assigned to the 101st Airborne Division, apply war paint to each other’s face in England in preparation for the invasion of Normandy, France, June 5, 1944. American assault troops in a landing craft huddle behind the protective front of the craft as it nears a beachhead on the northern coast of France, June 6, 1944.

American troops disembark a landing craft and make their way to the beach. Carrying 80-pound packs, assorted gear and equipment, the landing troops had to maneuver across 200 yards of exposed beach before reaching cover.

Some of the first assault troops to hit the Normandy, France beachhead take cover behind enemy obstacles to fire on German forces as others follow the first tanks plunging through the water towards the German-held shore. Members of an American landing party help fellow soldiers to shore after their landing craft was sunk by enemy fire. The survivors reached Omaha beach using a life raft. Ships put cargo ashore on one of the invasion beaches at low tide during the first days of the Invasion of Normandy.