77 years ago, the Allies took the fight to the Axis in ‘the soft underbelly of Europe’

On July 10, 1943, the Allies invaded of Sicily and a thrust into what British Prime Minister Winston Churchill called "the soft underbelly of Europe" 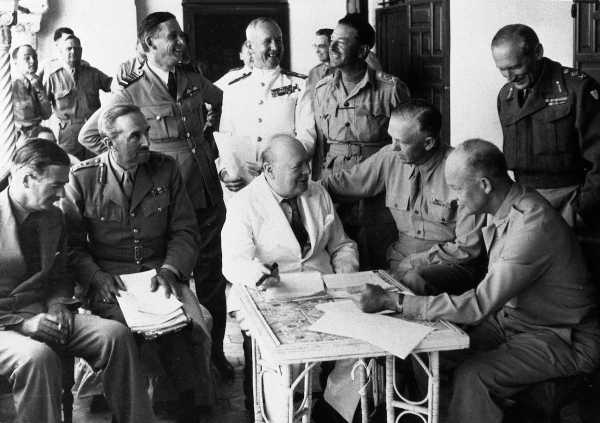 On April 30, 1943, Spanish fisherman recovered the body of British army Maj. William Martin. Spanish authorities quickly buried the body, but his personal effects — including the briefcase handcuffed to his wrist — were given to the Germans.

For the Germans, it was an intelligence coup. Documents in the briefcase revealed that the Allies, who were on the verge of defeating Axis forces in North Africa, would next invade Sardinia and Greece. Hitler moved entire divisions of troops away from Sicily and southern Italy to prepare for the attacks.

But the Germans had been fooled.

Martin was a homeless man from Wales who had killed himself in London the previous winter. British intelligence agents concocted his identity and created false invasion plans as part of Operation Mincemeat to disguise what was coming on July 10, 1943: The Allied invasion of Sicily and a thrust into what British Prime Minister Winston Churchill called “the soft underbelly of Europe.”

As the North African campaign came to an end, some Allies, including the US, wanted to invade France and head toward Germany. Others, led by the British, wanted to target Italy, opening Mediterranean sea lanes and providing a base for future operations.

The decision to go for Sicily was made at the Casablanca Conference in January 1943. Churchill and President Franklin Roosevelt wanted to take pressure off the Soviet Union. The British also had political and strategic interests in the Mediterranean that led to them to push for Italy.

On May 13, 1943, Axis forces in North Africa surrendered in Tunisia.

Focusing on Sicily was an uneasy compromise. In exchange for the Americans signing on to Operation Husky, the British reaffirmed their commitment to a cross-Channel attack.

Gen. Dwight D. Eisenhower was chosen as supreme Allied commander for the Sicilian operation. It would be carried out by the 15th Army Group, led by British Gen. Sir Harold Alexander, Eisenhower's main deputy, and consisting of two armies.

Planners decided to invaded along a 100-mile stretch of southeastern Sicily, where major ports and airfields were concentrated. The area was also in range of Allied aircraft based in North Africa.

The British force, including a Canadian division, would land on a 40-mile front on Sicily's southeastern corner, at the northernmost edge of which was the port of Syracuse, which was to be captured with the help of troops arriving in gliders.

The British were to push north to Messina, a port that was a key link to mainland Italy. Messina's capture would cut off Axis forces on the island.

Patton's army, a landing force supported by paratroopers, was to land along the Gulf of Gela in south-central Sicily. U.S. forces initially had a secondary role, protecting the British advance on Messina, which hinted at British doubts about U.S. troops' fighting ability.

The landings got off to a rough start on July 10, 1943. The landing force — 180,000 troops, 600 tanks, and thousands of other vehicles on 2,500 ships heading to multiple landing sites — were hit by strong winds that whipped up the seas and endangered smaller ships.

The landing force also faced attacks from German planes, which caused limited damage but had a psychological effect.

The paratroopers began landing late on July 9, and the Germans, who had already spotted the invasion force at sea, were aware of their presence by midnight.

The weather was especially challenging for the airborne force. Inexperienced Allied pilots, dealing with a complex flight plan and poor conditions, became confused.

Some strayed off course — only 12 of 144 British gliders made it to their landing zones outside Syracuse. C-47s carrying U.S. paratroopers were fired on by naval gunners nervous about German air attacks. Hundreds of paratroopers laden with heavy gear jumped too early and landed in the ocean.

The paratroopers who made it to shore were scattered over a wide area around the Seventh Army. That endangered the landing force, as there were fewer troops to form a buffer between the beachhead and Axis forces.

The German and Italian forces numbered between 200,000 and 300,000 men. Many Italians were ill-equipped and dispirited, though some units put up stiff resistance. While the Germans were more battle-ready, they were spread out.

The Italian commander had hoped to station German and Italian forces close to Sicily's coast. He considered the southeast to be the most likely landing spot and wanted to put the only two German divisions on the island there.

German Field Marshal Albert Kesselring disagreed, splitting the German divisions between the southeast coast and the other potential landing spot on the western coast.

The heaviest fighting took place in the center of the U.S. beachhead, where Axis units tried to push the landing force back into the sea.

Supported by naval fire, paratroopers and other U.S. soldiers beat back Italian infantry and tanks before facing a more serious attack from German armor and artillery, which overran some U.S. positions.

The landing force also struggled with the weather, especially rough seas that disorganized units coming ashore. The weather and rough beaches created congestion that was exacerbated by Axis artillery and air attacks.

The first days of the invasion saw fierce fighting.

Congestion on the landing beaches kept U.S. tanks from reaching the front line, forcing troops to rely on artillery and naval fire for support against Axis attacks.

At one point on the second day, German tanks made it within 2,000 yards of the beaches before being repulsed.

U.S. troops continued to advance, pushing out of the coastal plain into the hills around it, occasionally encountering determined German resistance.

British forces progressed at a similar pace, but in the days after the landing they started finding more opposition, particularly from elite German paratroopers who had arrived from France.

The British began to face stiffer resistance after July 13, and as the advance slowed, Montgomery convinced Alexander, the British general commanding the overall operation, to give him a broader front on which to advance.

The British force was told to cast farther west as it headed to the northeastern corner of the island, which would take it around the main resistance points. But it also cut into the U.S. Seventh Army's area of responsibility.

Patton was irate that his line of advance had been blocked.

He pushed for permission to head north, toward the island's capital, Palermo, the capture of which would be a public-relations coup and provide a base of operations on the northern coast.

The Italian commander had pulled the other German panzer division out of western Sicily, leaving behind Italian troops with little interest in fighting.

The U.S. advance met scarce resistance. It took only 72 hours to capture Palermo, and by July 24, the U.S. Seventh Army controlled the entire western half of the island.

The U.S. drive to capture Palermo and western Sicily led to the capture of 53,000 Italian troops and 400 vehicles, while costing only 272 men.

The fall of Palermo coincided with two important events.

It had become evident the British would not capture Messina alone, and on July 23, Alexander ordered Patton to turn east toward the city. On July 25, Italian dictator Benito Mussolini was deposed by opponents.

Allied planners had hoped the Sicily operation would undermine Mussolini and the Italian-German alliance, but Mussolini's ouster still surprised them. His downfall did not immediately end Italy's involvement in the war, however.

Messina was protected by some of the most rugged terrain on the island, including Mount Etna, just south of the city on the east coast.

The Germans had also built the Etna line, a series of strong points running from the east coast around Mount Etna and to the north coast.

Only four roads passed through the Etna line, and Alexander divvied them up — two northern routes for U.S. forces and two eastern routes to the British. Patton, feeling slighted, was determined to take Messina.

“This is a horse race in which the prestige of the U.S. Army is at stake,” he wrote. “We must take Messina before the British.”

The Germans took advantage of the terrain to slow the Allied advance, which was also hamstrung by illness and oppressive summer heat.

Some of the fiercest fighting of the entire campaign came when U.S. troops tried to capture the mountain village of Troina between July 31 and August 6.

The U.S. launched a massive assault on Troina. The landscape offered little cover from German and Italian troops dug into surrounding hillsides. The Germans launched at least 24 counterattacks during the weeklong battle, with important hilltop positions changing hands frequently, before eventually withdrawing.

Germans in San Fratello, at the northern edge of the Etna line, also fended off the U.S. advance along the coast, leading U.S. forces to make another amphibious assault on the night of August 7.

The landing achieved complete surprise and was able to block the coastal highway. The Germans had also chosen that night to withdraw from San Fratello, retreating past the landing force before it arrived, but U.S. forces still captured 1,000 prisoners.

Even as they fought Allied troops, the Germans were preparing to withdraw, planning to retreat to Messina and from there to the Italian mainland.

Fighting at San Fratello, Troina, and in the British sector broke the Etna line, but the Germans, using the terrain to their advantage, mounted an orderly retreat.

The U.S. carried out another amphibious landing at Brolo on August 11, which achieved surprise but was not big enough to contain the Germans it trapped, who fought their way out.

German commanders began a full-scale withdraw from Sicily on August 11. Despite engineers working feverishly to clear minefields and repair bridges, U.S. forces were not able to catch them.

Members of the U.S. Army's 3rd Infantry Division entered Messina on the morning of August 17, 1943, hours after the last Axis soldiers boarded ships to Italy.

U.S. reinforcements were quickly called into the city “to see that the British did not capture the city from us after we had taken it,” the division's assistant commander said.

Not long after Messina surrendered to Patton, a column of British vehicles entered the city. The British commander walked over to Patton and shook the U.S. general's hand.

Operation Husky would be overshadowed by Operation Overlord at Normandy in June 1944. But Husky was the largest amphibious operation of World War II in terms of the size of the landing area and the number of troops put ashore on the first day.

It was also a strategic success, giving the Allies a base in the Mediterranean, drawing in German forces from other theaters, and toppling Mussolini. Though Allied feelings about Husky were mixed at the outset, its success led to the invasion of Italy in September 1943.

Despite the importance of the Allied success at Sicily, they did not win a decisive victory.

Because of a lack of experience and integration among Allied forces and the conservative approach taken by planners, more than 100,000 Axis troops and 10,000 vehicles were able to withdraw from the island. Hitler, undeterred by Mussolini's fall, order the Wehrmacht to keep fighting in Italy, making the Allied campaign to free the country a hard slog.

Nevertheless, the Allies benefitted from Operation Husky, putting its lessons to use in the invasions of Italy and France.