The most moving images focus on those quiet moments after the violence is done — though the traces remain. 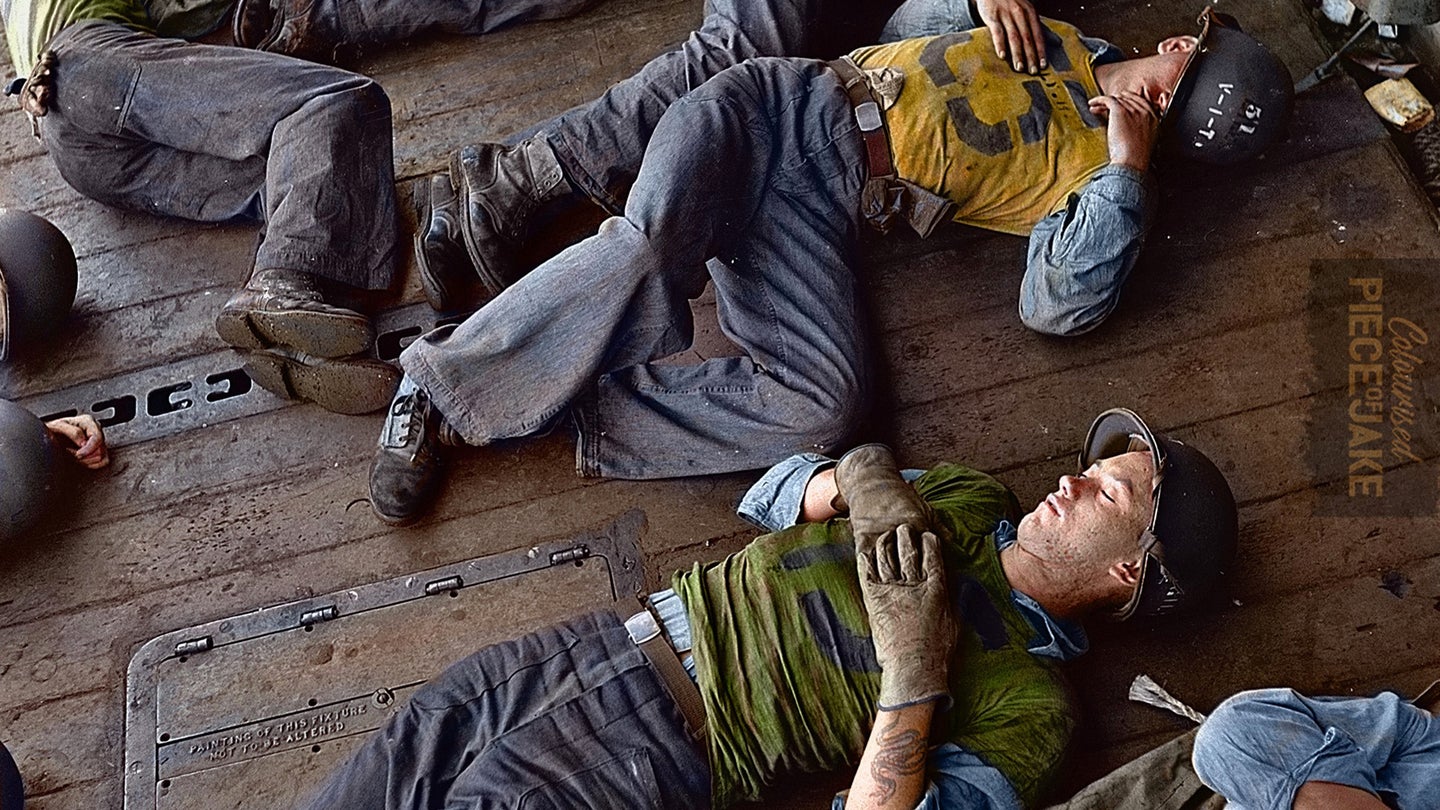 When those first few patches of color begin to spread across a black and white photo, “that’s the magical moment,” for artist Jakob Lagerweij. Maybe it starts in the eyes, or the hands, or the face, but once that first vibrant blot appears “it’s almost addictive,” he says.

“Once you start, you’re going to finish it.”

And within hours — or days, depending on the amount of research required to get every detail right — a piece of history seems to come to life. Splotches of dirt on the brow of a battle-weary soldier are suddenly thrown into sharp relief, and a scene that appeared mundane before, now takes on new meaning, as the slight curve of a smile, once easily overlooked, is exposed.

For the 46-year-old colorist, illustrator and sketch artist, it’s these quiet moments of men and women at war, or trapped in the midst of it, that he’s drawn to most.

Lagerweij’s interest in coloring historical photos began back in 2018, when he started working on black and white photos from his hometown of Deventer. And so he began in earnest, creating Colourised Piece of Jake and found his muse in photos of war.

He quickly discovered a whole online community of like-minded artists, who he turns to for help when he needs to pinpoint a specific uniform or piece of equipment belonging to a certain unit from one country or another.

“I thought I had invented the wheel, that it was really special that I came up with the idea to colorize on the computer, and then I found out there was a whole scene, especially for World War II and World War I.”

For the most part, Lagerweij eschews images of combat in favor of those quiet moments leading up to and after the violence is done — though the traces remain. The images, pulled from public archives and records, offer a glimpse of what the war was like for those who endured it across the globe, and at times, on different sides of the conflict.

And a quick look through his Facebook account shows that the work he puts into his craft isn’t confined to the images he colors, but is demonstrated in the thoroughly detailed captions he attaches to each, providing context that elevates a photo above just a pretty picture.

Task & Purpose had a chance to speak with Lagerweij in late June, to ask what draws him to work with old photos of war, how he chooses one over another, and how a simple dash of color can change the meaning of an image. (Editor’s note: This interview has been lightly edited for clarity and style.)

Task & Purpose: So, walk me through the process, how long does it take for a single photo?

Jakob Lagerweij: Well, that depends on the amount of research that is required. Sometimes I can’t find a certain insignia, or color patch, or something, and as long as I’m not really sure about the exact colors, I’d rather not post the image.

So, in the meantime I keep searching and that can take a while.

Now walk me through that. How do you make sure you get the color right?

It all comes down to research. It’s a lot of Googling and going through books that I have here, or I’m asking my fellow cohorts — we work together quite often, actually. We ask questions, we try to use each other for research purposes, and that works really really well.

In that way you have a very big group of people you can use, and that can be very handy.

So, if I can just color on autopilot, without doing any research, just putting in flesh tones and some colors in the background and clothing, maybe in half an hour or an hour, a portrait is done.

But if it’s a big group of people, or there are tanks or planes involved, usually I have to look up things, because there’s such a wide variety of markings, color schemes, out there, and it’s so easy to make a mistake. I always try to be as historically correct as possible. That’s the most time-consuming aspect.

How does adding color to these old photos change them? What’s the effect of that, from an emotional standpoint — the difference between a black and white photo of guys on the front, and seeing it in color?

And also, you discover a lot of new things while coloring, because you really dive into the picture. And if you zoom in, you see new things, and in some cases, I’ve been coloring an object, but I didn’t really recognize what it was, and only after putting color in it, I suddenly found if it’s this or that.

You discover things that you miss out on when it’s in black and white. A picture delivers so much more when it’s colorized. That’s one of the nice things of coloring.

How do you select your photos? When you’re going through, why do you choose one over the other? What images do you gravitate toward?

First of all, when quality is really poor, or when you have really extreme contrast — a lot of black or completely white — then coloring is almost impossible. Color won’t stick to black, nor white, so you need shades of grey.

But, the subjects I choose usually are the human aspect of a situation. The human aspect of war, but also, I look for photos that have a certain type of lighting. It’s always about reading a photo, actually. Where’s the sun? Was it high or low? Do you have long shadows or very harsh shadows and a lot of contrast? If the shadows are really mellow or really soft, usually it’s overcast — it’s a cloudy sky.

A lot of people tend to color everything blue — all the skies are blue. But sometimes it needs a bit of, well, guts, to leave the color out. When you do that, sometimes you get a way more realistic result.

I’m sure, yeah. You’re not always going to war on a sunny and bright day.

No. Usually the main factor is the human one. It’s always at the center of my subjects.

Are there any images you’re particularly proud of?

Sometimes it’s hard, like when you have to do reflections, you have to think logically how it works with reflections for instance. You have to look around the shiny object — what’s there, and what’s reflecting in its surface. So it’s always sort of a challenge to figure out how all of these items blend in together, and the technical aspect of coloring is something that, sometimes, I really succeed in my own humble opinion, and that makes me proud.

And also, when you get a reaction from people on the internet, after posting an image. Relatives send you a message — those are the happy surprises.

You’ve had people who recognized someone in a photo and reached out?

Yeah. There’s this crashed Spitfire. It crashed in Italy. The pilot, he walked away, and after posting, his son, from his third marriage, he was relatively young, he contacted me. And he said ‘Well, that’s my dad’s Spitfire, and I have a lot of extra information on this photo if you’d like I can share it with you.’

So those are the really fun things, and he showed me the complete diary and all the notes of that day from his father, and it was a really funny story as well.

Those are really the nice moments; the bonuses that make it really special. Then all of a sudden you have this feeling that you’re doing something good. That you’re helping someone, and that’s really satisfying.