The Japanese attack on the U.S. naval base in Hawaii killed more than 2,400 American sailors and civilians and wounded 1,000 more 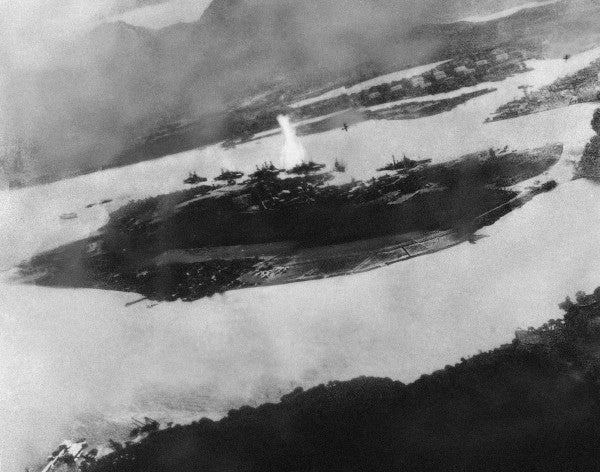 The attack on Pearl Harbor happened 78 years ago on Saturday.

The Japanese attack on the U.S. naval base in Hawaii killed more than 2,400 American sailors and civilians and wounded 1,000 more.

Several photos were captured during the attack, some of which have become iconic of that infamous day.

Here are the stories behind five of those unforgettable images.

A Japanese fighter plane drops what’s believed to be the first bomb on Pearl Harbor on Dec. 7, 1941. (Associated Press photo)

The above photo, which was taken by a Japanese photographer, was found by U.S> Navy photographer Martin J. Shemanski at Yokusuka Base near Tokyo Bay shortly after the Japanese surrendered.

Shemanski and four other U.S. military photographers were ordered to go through Japanese photo processing labs after the surrender, and he found it torn up in a trash can.

“It had a torn photo in it,” Shemanski told the Press-Enterprise in 2015.

“I picked up a couple pieces and I got a shot of a torpedo hitting the Oklahoma. I thought, ‘This is Navy intelligence,'” he added.

The USS Oklahoma was a Nevada-class battleship that was sunk during the attack on Pearl Harbor.

Shemanski told the Press-Enterprise that the picture was torn up in about 20 pieces.

Shemanski reassembled the photo and turned it over to U.S. naval intelligence on the USS Shangri-La aircraft carrier.

The USS Shaw explodes during the Japanese attack on Pearl Harbor on Dec. 7, 1941. (U.S. Navy photo)

This photo shows the USS Shaw destroyer exploding while in floating dry dock.

Between 7:55 a.m. and 9:15 a.m., the Shaw was hit by three bombs released by Japanese fighters in steep dives from approximately 1,000 feet, according to the U.S. Navy action report.

The Shaw immediately caught fire, and the ship was abandoned. About 20 minutes later, as sailors were trying to flood the dry dock to save the ship, the forward magazines blew up, which is pictured above.

The blast destroyed the bow and damaged the dry dock and a nearby tugboat.

Initially thought to be a loss, the Shaw was eventually repaired and later took part in several engagements in the Pacific, including the biggest naval battle of all-time, the Battle of Leyte Gulf.

The USS West Virginia (left) next to the USS Tennessee during the attack on Pearl Harbor on Dec. 7, 1941. (U.S. Navy photo)

The picture above shows the USS West Virginia and USS Tennessee battleships on fire in Battleship Row.

Battleship Row was where seven U.S. Navy battleships were moored on the eastern side of Ford Island (shown in the first picture), which rests in the middle of Pearl Harbor.

As such, these ships were the main target for the Japanese fighter planes, with 29 of Japan’s 40 torpedo planes ordered to attack it.

Each Japanese torpedo plane carried one Type 91 aerial torpedo with a warhead of 992 pounds, and 21 of them hit their targets. Japanese bombers then flew in after the torpedo plane attacks and caused further damage.

In total, the Japanese sunk the Oklahoma and Arizona, and damaged the other five ships.

This photo shows a boat rescuing a crew member from the water as two other sailors are in the upper center of the burning USS West Virginia’s superstructure.

The USS West Virginia was a Colorado-class battleship that was hit by at least seven torpedoes and two bombs during the attack.

When the West Virginia was raised from the water for repairs six months after the attack, they found the bodies of three U.S. Navy sailors who had been trapped in a compartment for 16 days, according to the Honolulu Advertiser.

U.S. Marines standing guard had heard the sailors banging for help, but they couldn’t do anything. No one on guard wanted to go near the ship and hear the sounds.

When the sailors bodies were finally recovered, rescuers found a calendar on which the sailors had marked their last days.

The West Virginia was later reconstructed and put back into the war in 1944, supporting operations in the Philippines and Okinawa.

Smoke rises from the USS Arizona battleship as it sinks after the attack on Pearl Harbor on Dec. 7, 1941.(Associated Press photo)

This photo shows the USS Arizona battleship sinking in Battleship Row after it was hit by eight Japanese bombs and one torpedo.

One of the bombs went through a magazine and ignited cordite, which caused an expansion of gases and then a huge explosion.

The Arizona quickly sunk with 1,177 of the 1,512 personnel on board, which was about half the number of people killed in the entire attack.

The battleship burned for more than two days.

This is perhaps the most iconic taken during the Pearl Harbor attack. The Arizona still lies in the harbor as a national memorial.