Battleship USS Nevada, a symbol of American ‘resilience and stubbornness,’ rediscovered after 72 years

"Nevada is an iconic ship that speaks to American resilience and stubbornness. It reminds us of those who took up the challenge of defending the United States" 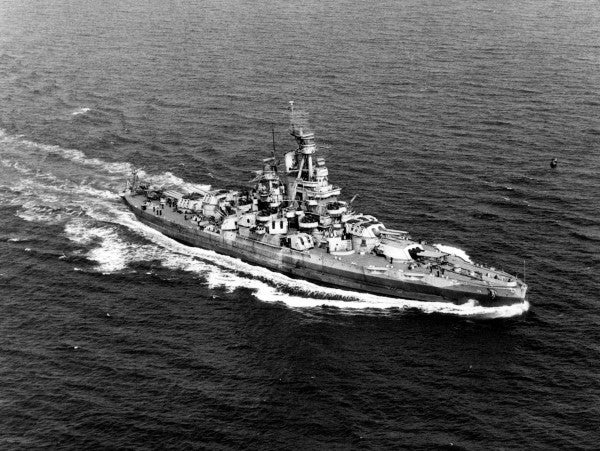 And just like Rocky, the USS Nevada got hit. A lot. By Japanese bombs and torpedos, a kamikaze plane and an artillery shell. Hit after hit, the Nevada just wouldn’t go down, and that tenacity allowed it to participate in some of the biggest fights of World War II.

Though the ship was sunk intentionally by the U.S. Navy in 1948, it was rediscovered on Monday 65 nautical miles southwest of Hawaii, buried under nearly three miles of seawater.

“Nevada is an iconic ship that speaks to American resilience and stubbornness,” wrote Dr. James Delgado, lead maritime archaeologist on the mission to discover the battleship, in a statement. “The physical reality of the ship, resting in the darkness of the great museum of the sea, reminds us not only of past events, but of those who took up the challenge of defending the United States in two global wars. This is why we do ocean exploration, to seek out these powerful connections to the past.”

Delgado serves as senior vice president for SEARCH, Inc., the largest underwater and terrestrial archaeology firm in the United States. SEARCH partnered with the marine robotics company Ocean Infinity to locate the remains of the Nevada — and though the ship is over 100 years old, the search used cutting-edge tech to track it down.

For example, Ocean Infinity used an Autonomous Underwater Vehicle (AUV), an unmanned robotic craft, to survey a hundred square mile area of the Pacific at a depth of nearly three miles to find the wreck. By comparison, the U.S. Navy is only just starting to work on robot submarines for missions it deems too risky, mundane or expensive for human crews.

The 27,500-ton Nevada was also considered cutting edge when it was first commissioned in March, 1916. It was “revolutionary for her time: the first ‘superdreadnought;’ the first U.S. warship to be oil-fired; the first to have a triple-gun main turret; and, the first to have all-or-nothing armor,” according to the blurb for the 2018 book Silver State Dreadnought: The Remarkable Story of Battleship Nevada by Stephen M. Younger.

The only thing more impressive than the Nevada’s specs was its ensuing service record. The ship escorted convoys across the Atlantic during World War I, according to an Ocean Infinity press release. It even escorted the ocean liner George Washington as it carried President Woodrow Wilson to The Versailles Peace Conference in 1919, which set the peace terms for the Central Powers defeated in that conflict.

But though the Nevada witnessed the close of America’s involvement in one World War, it was also present at the start of the next. According to the Naval History and Heritage Command, the Nevada was the only battleship able to get underway during the December 7, 1941 attack on Pearl Harbor. However, the ship had been hit by a torpedo and several bombs, so it had to be beached soon afterward.

Sixty of the ship’s crew were killed and 109 wounded during the attack, Ocean Infinity wrote.

Despite the heavy losses, Pearl Harbor wasn’t the end of the Nevada’s fight against fascism. After months of repair and salvage work, the ship set sail again in April 1942, then provided fire support for the Attu landings in May 1943. After that, it was back to the Atlantic, where the Nevada helped shell Normandy during the D-Day invasion of June 1944. The ship soon made a name for itself for its accurate gunnery.

“For 12 days she roamed the coast of the Cherbourg Peninsula, building the legend of her incredibly accurate firepower by placing her huge 14-inch shells within 600 yards of the Allies' front lines,” wrote GlobalSecurity.org about the ship. “Once the Atlantic coast was secure, Nevada proceeded through Gibraltar to support the invasion of France's Mediterranean coast, leaving nothing but rubble and twisted steel to identify the former Nazi shore batteries of Toulon.”

As the fight for Europe continued, the Nevada went back to the Pacific, this time to lay down fire support at the battles of Iwo Jima and Okinawa in February and March 1945. The ship soon received some of the most brutal combat punishment of its career, including a kamikaze attack and shore battery fire. That took the Nevada out of the fight for a bit, but it was still ready to go for the invasion of Japan before the war ended on August 14, 1945.

The Nevada was too old for retention in the post-war fleet, according to the Navy, so it took on a new role: target dummy. The ship was assigned to serve as a target during the July 1946 atomic bomb tests at Bikini Atoll, in the Marshall islands. But though the test left the ship damaged and radioactive, it was still afloat. Finally, in 1948, the Nevada was used as gunnery practice target before  being sunk by an aerial torpedo in 1948.

According to Stars and Stripes, the Navy was aware of the vicinity of the ship’s sinking, but its exact resting spot was unknown until now. Ocean Infinity said its ship Pacific Constructor set sail for a range of commercial tasks in the Pacific in early 2020, before the novel coronavirus (COVID-19) pandemic, and the ship remained at sea as the health crisis raged on.

Shawntel Johnson, director of search and recovery at Ocean Infinity, thanked the company's offshore crews who kept working through COVID-19.

“We continue to value the work they do and the personal sacrifices they are making to keep us operational,” she said.

Maybe, as the COVID-19 pandemic continues, we can all look up to the Nevada's example of resilience.

“Nevada has a proud place in the Navy’s history,” wrote Retired Rear Admiral Samuel Cox, Director of the Naval History and Heritage Command, in a statement. “USS Nevada serves a reminder that our sailors have a long, terrific tradition; her fighting spirit proved the U.S. Navy remains tough in difficult times. When the circumstances appear to be at their worst, our Navy remains at their best.”