“The wreck is a breeding ground for fish; just teeming with sea life.” 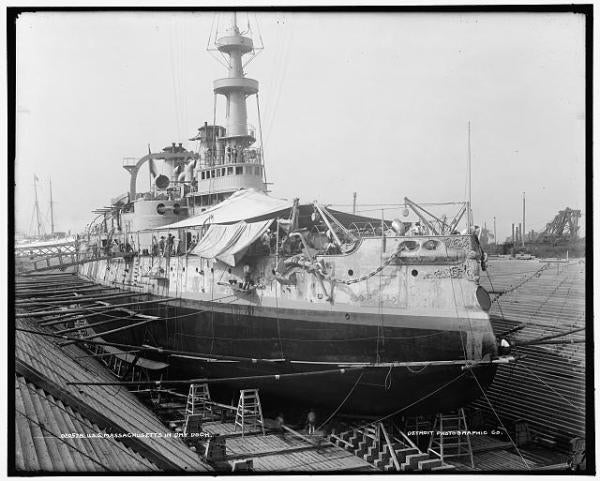 For those who argue the likelihood of an afterlife, consider the USS Massachusetts.

The rusting hulk of the first battleship named for the Bay State lies at the bottom of the Gulf of Mexico, yet lives on as a veritable kindergarten for schools of fish, a destination for divers and a watery warehouse of history.

Diver Eilene Beard’s features becomes animated as she speaks of the Massachusetts, calling it a haven for aquatic life.

“The wreck,” Beard said, “is a breeding ground for fish; just teeming with sea life.” Within a year of the ship being scuttled, the hulk had been taken over by aquatic creatures, she said.

Beard, 71, helped found Friends of the Massachusetts and was instrumental in arranging the group’s non-profit status. Objective was to purchase and place a monument at the bow of the ship. The Massachusetts was designated an underwater archaeological site in June 1993. The “friends” group had done its job and was disbanded.

“We are very fortunate,” Beard said, “to have so much incredible sea life and so many dive sites so close to Pensacola.”

It’s been good for business, too.

Pensacola native Beard and business partner Gene Ferguson, 81, opened the Scuba Shack “on April Fools Day, 1973,” Beard said with a grin. “That ought to tell you something.”

'Eager to dive there'

Both divers themselves, Beard and Ferguson sell scuba equipment, offer diving lessons and specialty charters in the Gulf of Mexico.

Ferguson is captain of the shop’s 50-foot dive boat, “Wet Dream,” delivering divers and spear-fishing enthusiasts to sites off Pensacola. Ferguson fairly lights up as he shows his photographs of Goliath groupers, which he estimates would weigh in at 300 pounds each, swimming near the hull of the Massachusetts.

Ferguson has lived in the Pensacola area since the 1950s when his father, a sailor, was stationed here. It was Ferguson who edged the dive boat close to the hulk to position the historic marker at the bow of the Massachusetts.

Ferguson said he and Beard arrange, schedule and direct “20 to 30 dives a year” at the Massachusetts. He said he is eager to dive there again this year “when the water gets warmer.” In early March, the seawater temperature at Pensacola was in the mid-60s. By mid-summer, the water temperature is expected be about 20 degrees warmer.

The Massachusetts is but “one of about 20” sites to which Ferguson will take clients, “But there are thousands of dive spots off Pensacola,” he said.

“Diving conditions near the Massachusetts have to be just right,” Beard said, citing such circumstances as “a high slack-tide, no wind, wave action or crosscurrents.”

She was armed with two 13-inch gun batteries, at the time the largest guns ever put to sea. She also sported four eight-inch gun batteries and four torpedo tubes. It was propelled by steam engines generating more than 9,000 horsepower and was manned by 473 crewmen. Top speed is said to have been 15 knots.

Following a shakedown cruise in August 1896, the ship conducted trials and maneuvers along the mid-Atlantic coast, then put in to dry dock at the New York Navy Yard for overhaul. By late February 1897, the battleship was on its way to Boston where it was welcomed May 28 by dignitaries and presented a copy of the Massachusetts coat of arms.

But the ship had major design flaws, most notably the weight of its big guns. When both turrets were turned to the same side of the ship, the weight of the gun barrels caused the Massachusetts to list to that side, so much so that other guns and the deck would be submerged. Combined weight of the four 13-inch guns was 544,000 pounds; each projectile weighed 1,130 pounds.

After the war, the Massachusetts was assigned to the North Atlantic Squadron, taking part in gunnery practice and training maneuvers. Nine sailors were killed in a powder explosion in a gun turret Jan. 16, 1903. She twice ran aground, requiring several months of repair, and was decommissioned in 1906.

The Massachusetts’ design flaws led to its being dubbed by historians and journalists as “the worst battleship ever made.” It was retired, twice, and used as a cruise ship for sailors before being “stripped of her guns and furnishings” and towed to Pensacola for use as a target for experimental artillery. She was sent to the bottom on Jan. 6, 1921 in water so shallow that the main gun turrets sometimes break the surface.

The site is a mile and a half south-southwest of Pensacola Pass in what is designated the Fort Pickens State Aquatic Preserve, which is administered by the Florida Department of Environmental Protection.

After a century at the bottom of the Gulf of Mexico, the Massachusetts is teeming with life as a full-fledged artificial reef, one of a dozen underwater archaeological sites in Florida. The hulk is protected by Florida laws that forbid the “unauthorized disturbance, excavation or removal of artifacts.” Divers are advised to “Take only photos; leave only bubbles.”