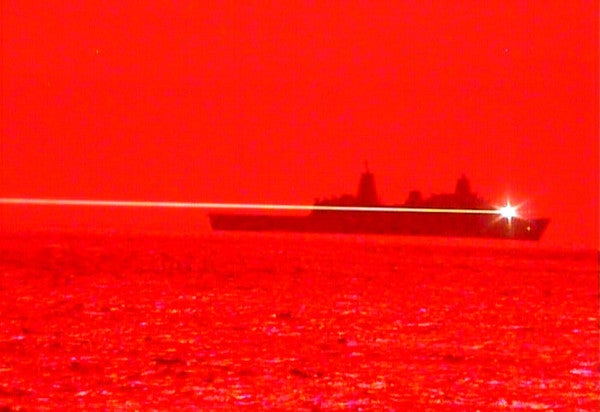 The Navy successfully disabled an unmanned aerial vehicle with a shot from a new laser weapon last week, the service announced Friday.

The amphibious transport ship USS Portland took out the UAV using a Solid State Laser Weapons System Demonstrator (LWSD) that, officially installed on the ship in December 2019, is a product of the Navy's Solid State Laser – Technology Maturation program.

According to the Navy, it's the first system-level implementation of a high-energy solid-state laser on a warship.

“By conducting advanced at sea tests against UAVs and small crafts, we will gain valuable information on the capabilities of the Solid State Laser Weapons System Demonstrator against potential threats,” USS Portland commanding officer Capt. Karrey Sanders said in a statement.

According to U.S. Pacific Fleet, the Navy envisions the LWSD as essential new defense against swarms of small boats, unmanned aircraft, and adversary intelligence, surveillance and reconnaissance systems.

The Navy had previously announced plans to outfit the USS Preble with the High Energy Laser and Integrated Optical-dazzler with Surveillance system (HELIOS) some time in 2021.

The Navy's fiscal 2021 budget request included $68.2 million for the “Navy Laser Family of Systems,” as Military.com reports, which includes the development of an “advanced prototype laser weapon system” at a strength of 60 kilowatts or higher.

While the ODIN and HELIOS effort focused on rapidly fielding a 30 and 60 kw high-energy lasers on ships, respectively, the 150 kw LWDS represents a significant boost in power over previous efforts.

“The Solid State Laser Weapons System Demonstrator is a unique capability the Portland gets to test and operate for the Navy, while paving the way for future weapons systems, “ Sanders said. “With this new advanced capability, we are redefining war at sea for the Navy.”

RELATED: AFSOC to finally mount a laser weapon on an AC-130 gunship