After years of testing out a low-energy Stryker-mounted directed energy system, the Army is formally pushing for a combat-ready laser weapon to blast enemy drones and ordnance out of the sky in the next four years 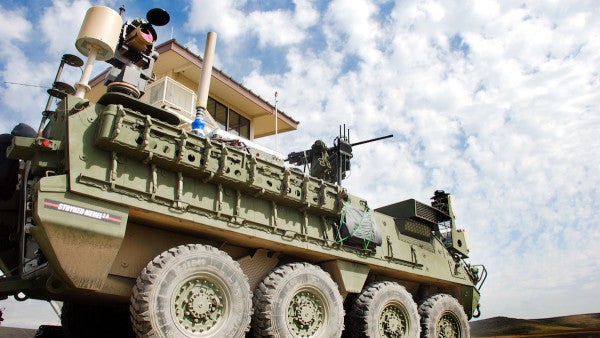 After years of testing out a low-energy Stryker-mounted directed energy system, the Army is formally pushing for a combat-ready laser weapon to blast enemy drones and ordnance out of the sky in the next four years.

The Army is officially accelerating the prototyping and fielding of four Stryker vehicles outfitted with 50 kW-class laser weapons by fiscal year 2022, the service announced on July 26, a ten-fold increase over the 5 kW-class system that artillery soldiers have been testing in Germany since early 2018.

“The time is now to get directed energy weapons to the battlefield,” saidLt. Gen. L. Neil Thurgood, director of Hypersonics, Directed Energy, Space and Rapid Acquisition, said in a statement. “The Army recognizes the need for directed energy lasers as part of the Army's modernization plan. This is no longer a research effort or a demonstration effort. It is a strategic combat capability, and we are on the right path to get it in soldiers' hands.”

The news isn't a complete surprise: Thurgood had previously stated in June that the service was looking to outfit a battery of Stryker vehicles with a 50 kW-class system by 2021 and deliver them to U.S troops by the following year.

But in late July, the Army made the effort official with a $203 million contract to Alabama-based Kord Technologies to deliver a 50 kW-class MMHEL laser prototype to the service by some time in 2022, IHS Jane's reports, with plans to purchase an additional three laser-equipped Stryker vehicles should the Kord prototype prove satisfactory.

In addition, both Northrop Grumman and Raytheon are competing to subcontract with Kord on the actual production of the prototype laser system, with integration support from Stryker manufacturer General Dynamics Land Systems.

“Under the terms of the contract, the two laser vendors have approximately one year to produce the required laser subsystems, integrate them onto the Stryker platform, and complete a competitive performance checkout leading into a range demonstration against various threats,” according to the Army.

That award could potentially swell to $490 million for those initial four Stryker prototypes.

The Army isn't stopping at 50 kW, though: the service is now pursuing a prototype 100 kW-class High Energy Laser Tactical Vehicle Demonstrator (HEL-TVD) laser system designed not just to mount on a Family of Medium Tactical Vehicles platform, but inform other directed energy efforts across the U.S. armed forces.

“Under the new directed energy strategy, the Army is leveraging progress made in that effort in order to merge the HEL-TVD with similar technologies in development by the Navy and the Office of the Secretary of Defense,” the service said in a release, adding that this partnership “will allow the services to achieve a higher power system, of approximately 250-300 kW-class, that can protect sites from RAM and UAS as well as more stressing threats.”

Anyway, mark your calendars: while it's unclear which lucky soldiers will get their hands on the Army's first high-powered laser weapon first, 2022 is starting to look like a good year for a laser party:

I will apologize for nothing.