Air Force Special Operations Command has been itching to add a frickin’ laser beam to the already-brimming arsenal of its... 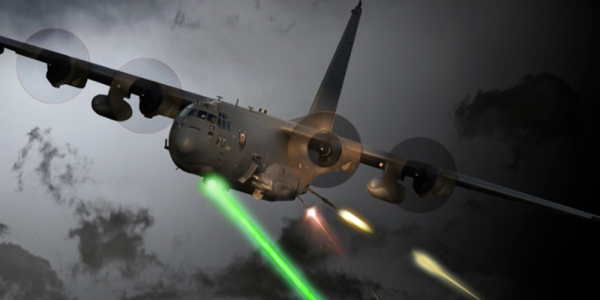 Air Force Special Operations Command has been itching to add a frickin’ laser beam to the already-brimming arsenal of its AC-130J Ghostrider gunships. But plans for a high-powered add-on to the Air Force’s “ultimate battle plane” may have hit a significant obstacle.

The program is currently $58 million behind what’s required for “a full program” to start outfitting Ghostrider gunships with 60 kilowatt lasers by fiscal 2022, AFSOC commander Lt. Gen. Marshall Webb told lawmakers on April 11. By comparison, the laser-outfitted Strykers currently undergoing testing by the Army’s 2nd Cavalry Regiment for intercepting missiles and drones only fire at around 5 kw).

What does 12 times the power get you? A 60 kw high-energy laser “ achieve high precision lethal effects on targets with little to no acoustic signature and very low collateral damage,” emphasized Webb in his opening statement. At that intensity, Webb has said, a directed-energy beam can fry enemy command and communications systems, disable potential escape vehicles, and render enemy facilities without power — not to mention blind the bejesus out of adversaries caught in its path.

This prospect of laser weapons ending up stuck in an R&D; “valley of death” for years was clearly a concern for lawmakers and military planners. During the Senate Armed Services Committee hearing, Sen. Martin Heinrich, Democrat from (aerospace-heavy) New Mexico, worried that U.S. Special Operations Command’s plan to initially demonstrate 4 kw and 30 kw directed-energy weapons — technological stepping stones on the way to an “operationally relevant” 60 kw system, which overcomes problems like the interference of dust and sand that can wreak havoc on laser-guided munitions — would delay the fielding of any potential laser system until 2030.

Webb concurred with Heinrich’s assessment, stating that the command “was starting to see funding” that could accelerate the development of the technology before noting the $58 million shortfall in the current fiscal 2019 defense budget proposal.

Funding levels have remained a major concern for direct-energy weapons in the years since the Budget Control Act of 2013 put military spending under a microscope. Consider the decade-long development of the Navy’s electromagnetic railgun project: As Task & Purpose reported in December 2017, advocates of the next-generation supergun worried that the defense budget would fail to allocate appropriate funding or a tactical demonstrator, an essential step to fielding the system downrange. While the railgun wasn’t completely abandoned, sources in February suggested the program’s diminished funding suggested its development has stalled.

Related: The Air Force Is Preparing To Test A Laser Cannon On Its ‘Ultimate Battle Plane’ »

Indeed, Webb’s been emphasizing funding as the key to all other technical developments. “The challenge on having the laser is funding,” Webb said at the Air Force Association's Air Warfare Symposium in February 2018, Military.com reported at the time. “And then, of course, you have the end-all, be-all laser questions: 'Are you going to be able to focus a beam, with the appropriate amount of energy for the appropriate amount of time for an effect?'

While the Ghostrider was declared Initial Operating Capacity back in 2017, problems have dogged the much-anticipated battle plane in recent months well outside the laser question. A January 2018 after-action from the DoD’s Office of the Director of Operational Test and Evaluation concluded that Ghostrider’s fire control systems “performed inconsistently when accounting for changing ballistic conditions,” frequently required in-flight recalibrations, and can’t operate at a full rate of fire without safeguards kicking in; Webb threw cold water on the report in February as “a lot of normal stuff that happens in test.”

Even beyond broader issues with the Ghostrider airframe, the message from AFSOC is clear: if lawmakers and military planners are actually serious about sending in laser-planes for some extra crispy close air support, they need to pony up the dough — and fast.