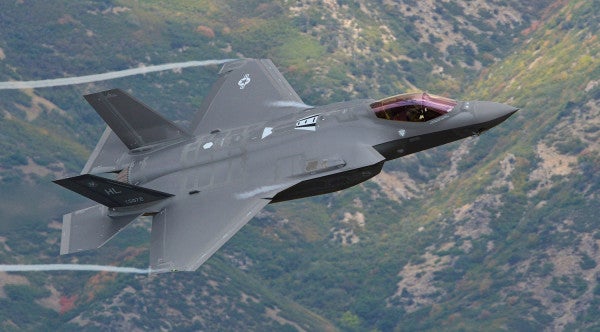 Despite its history of cost overruns, the Pentagon's fifth-generation fighter program is on course to realize significant savings in coming years, the program manager said this week.

Jeff Babione, Lockheed Martin's program manager for the F-35 program, told reporters Tuesday that the cost of the F-35A — the Air Force variant of the aircraft — was expected to drop from nearly $100 million per plane to about $85 million by 2019, thanks to efficiencies and cost-cutting manufacturing technologies.

The B and C variants designed for the Marine Corps and Navy, which are heavier and purchased in smaller quantities, are not included in the 2019 goal.

Related: Sanders’ position on the F-35 contradicts his views on defense spending »

“We think that price with this capability will be unbeatable,” Babione said. “You'll be able to afford a fifth-generation airplane for what would be a fourth-generation price for anything else offered in the free world. The Lockheed/BAE/Northrop Grumman contractor team is hyper-focused on reducing the price of the airplane.”

With the Air Force set to reach F-35 initial operating capability by the end of this year, Babione said Lockheed Martin's manufacturing facility in Fort Worth, Texas, was busy assembling the largest number of airplanes the program had ever produced at one time. At any given time, he said, there are some 115 F-35s in stages of major sub-assembly.

While production volume drives costs down, Babione said Lockheed was also finding savings through manufacturing innovations. A robotic arm that applies coatings to the aircraft's diverterless supersonic inlet bump reduces man-hours and facility costs, he said, saving $6,000 per jet and $27 million across the robotic system's program life. A laser system that strips paint and prepares metal surfaces ahead of drilling saves $15,000 per aircraft and $46 million across the system's expected program life. A high-tech forging system that reduces waste is good for another $30,400 per jet, or $10 million across the life of the program.

Also key to realizing F-35 program cost savings goals is a multi-year international and U.S. “block buy” that would allow Lockheed to procure materials to build the planes far ahead of time and at lower cost. This is a more controversial proposal, however.

A study released this year by the Pentagon's Director of Operational Test and Evaluation suggested that the proposed block buy may be premature because of ongoing software and maintenance issues.

“Is it prudent to further increase substantially the number of aircraft bought that may need modifications to reach full combat capability and service life?” DOT&E; officials asked in the report.

Babione said these issues shouldn't stand in the way of a block buy.

“When I look at a program and decide, 'is it stable enough to do a block buy,' you really don't look at things like software, because I can change the software tomorrow. What I'm looking for is, 'is the foundation of the aircraft stable?' So you start looking at the structural integrity, the way the aircraft was designed,” he said. “If you look at fatigue test results, we're significantly better than most aircraft before. The aircraft structural design is very sound, and that's what forms the foundation of the aircraft for the next 40 or 50 years.”

The Pentagon's F-35 Joint Program Office is expected to make a decision regarding a possible block buy this summer.