Is The F-35 Program Finally Getting Its Act Together?

Editor’s Note: This story by Samantha Masunaga was originally published by the Los Angeles Times (Tribune News Service). A rumble... 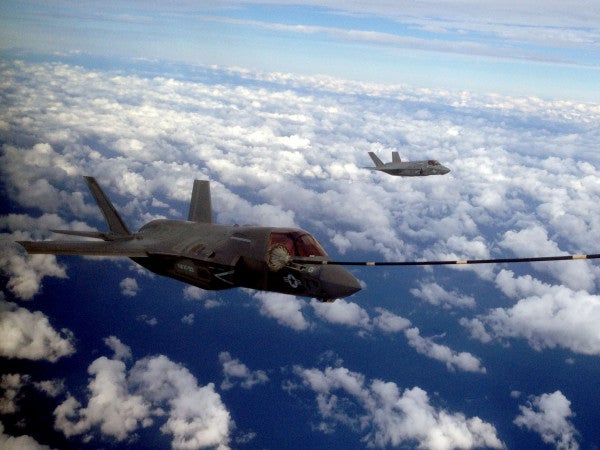 A rumble shakes the air as two British F-35 fighter jets take a low approach and circle a landing strip.

Nearby, a U.S. Air Force F-35 roars down another runway, only to decelerate rapidly as part of a test to see if cables correctly catch a hook on the back of the plane. Moments later, an Air Force F-35 taxis out and takes off, afterburner blazing, followed by a Danish F-16 that serves as a chase jet.

The mix of nationalities on display is a testament to the complexity of the most expensive weapons program ever.

But the buzz of increased test flight activity here in the Mojave Desert also signals that production of the long-delayed F-35 — which was initially supposed to enter full-scale production in 2008 — is finally ramping up.

That increased rate of building, toward full production in 2019, is now rippling through more than 100 Southern California subcontractors that supply parts and software for the F-35’s builder, Lockheed Martin Corp.

Eventually, more than 3,000 planes will be built for the U.S. and 11 other countries, at a total projected cost of $379 billion, which includes inflation.

“I’ve been on the program now for about 11 years,” said Don Kinard, senior technical fellow at Lockheed. “This is pretty exciting to finally get to the point where we’re increasing (the) rate.”

After years of delays and cost overruns, the program now seems to be on track.

“It looks like all the major hurdles are behind them,” said Richard Aboulafia, aviation analyst at the Teal Group, an aerospace and defense analysis firm. “And they’re running out of possibilities for major surprises.”

The problems began with the original concept of building a sort of flying Swiss Army knife.

Known as the Joint Strike Fighter, the F-35 was to be all but invisible to radar, fly faster than the speed of sound and incorporate advanced sensors, including a helmet that displays feeds from video cameras embedded in the plane so a pilot could look through the jet to target something on the ground.

The new fighter would replace four aircraft, with design variations to meet the unique requirements of the Air Force, Marine Corps and Navy.

For example, the F-35B model for the Marines can take off from short airfields and land vertically. To do so, its jet pipe swivels downward and a powerful downward-facing fan opens up behind the pilot.

The Navy variant has larger wings and hardier landing gear, to handle the stress of takeoffs and landings on aircraft carriers.

The most common model, with conventional takeoff and landing capabilities, is being built for the Air Force and other U.S. allies such as Israel and Denmark.

That complexity means that some parts, such as the center fuselage produced by Northrop Grumman Corp., must be designed several ways. Depending on which variant is being produced, Northrop Grumman changes out its locating feature, a tool that holds parts in the right location for assembly. Robots and drill machines are also programmed differently.

Signing up partner nations to buy and help build the plane was seen as a way to spread the cost. But another cost-saving strategy — allowing Lockheed to start building planes while development continued — contributed to the production problems.

For instance, in 2014 an engine caught fire shortly before takeoff at Eglin Air Force Base in Florida, leading to a temporary grounding of the F-35 fleet. The fire was later attributed to excessive rubbing in a fan, and existing engines were retrofitted and new ones retooled.

The aircraft’s complex nerve center, composed of more than 8 million lines of code, had stability issues. A bug in earlier versions of the software caused it to shut off and “reboot,” according to written testimony from Frank Kendall, undersecretary of Defense for acquisition, technology and logistics, and Lt. Gen. Christopher Bogdan, program executive officer for the F-35, before the Senate Armed Services Committee in April.

The latest version of the software that would give the planes full combat capability may still have shutdown issues. A recent report from Aviation Week said the developmental team at Edwards has seen glitches that required system reboots. Program officials told the publication it was normal to encounter challenges during developmental testing.

In April, a Government Accountability Office official said that although cost estimates have decreased since 2014, the program still faces “significant affordability challenges.”

The total cost of the program has more than doubled, and the military has repeatedly said the program was back on track before another problem derailed it.

Aboulafia of the Teal Group said the idea of one plane with so many capabilities “created something that does a bunch of jobs, state of the art.”

“But it is initially expensive and problematic,” he said. “So press ahead, end your production, deploy it, but also, ‘never again’ is a pretty good mantra.”

In 2014, Lockheed Martin and its principal subcontractors Northrop Grumman and BAE Systems said they would invest $170 million over two years to reduce the cost of the fighter jet by investing in more efficient manufacturing processes.

Lockheed officials said that should help reduce the cost of the most common jet variant from almost $100 million per plane to about $85 million by 2019.

Building more jets will also drive down per-plane costs. Lockheed plans to increase production from four jets a month in its facility in Fort Worth to up to 17 a month by 2019. The company has delivered more than 170 operational jets so far.

Though the production ramp-up seems to be going “reasonably well,” producing 150 aircraft a year will be a whole other challenge, Aboulafia said.

“That involves significant output increase by the supply chain,” he said. “Probably not a major risk, but definitely something to reckon with.”

Lockheed said there are close to 150 suppliers just in the Los Angeles area, responsible for more than 10,000 direct and indirect jobs.

One of them is Ducommun Inc. The manufacturing and engineering firm has produced F-35 inlet lipskins — a complex metal structure at the front of the engine where the air gets sucked in — for about six years at its facility.

The 167-year-old company — whose aluminum was used in Charles Lindbergh’s Spirit of St. Louis — expects to nearly double its previous production rate over the next few years, said Kevin Wright, vice president of strategy.

“We expect to increase as they do,” he said. “We’re not talking hundreds per aircraft — it’s a relatively modest number. But it plays into our sweet spot.”

Northrop Grumman, which produces the center fuselage for all three versions of the plane, created a new integrated assembly line in 2011 in preparation for full production.

At any one time, there could be a mix of fuselages for any of the three variants in production on the line at the same time, said David Tracy, director of Northrop’s F-35 center fuselage assembly. As of June, the defense giant had produced 250 fuselages. Each part takes about 9 1/2 months to produce, and Northrop sends one fuselage to Lockheed every three manufacturing days.

Tracy said the company is likely to add about 300 workers to the line over the next few years, for a total of 700 technicians.

Back at Edwards, the final bit of testing involves firing and dropping all the weapons that will be fielded with the F-35A, including laser-guided bombs, air-to-air missiles and cruise missiles.

Maj. Raven LeClair, assistant director of operations for the 461st test squadron at Edwards, described the flying experience as a mix between that of the earlier F-16 and the F-15 Strike Eagle.

“It is still just a fighter jet,” he said. “But it is a giant leap forward and quite a bit of technology.”

LeClair’s background is with the 1980s-era F-16, so the F-35’s technology-heavy cockpit — with two giant touchscreens and few gauges or switches — took some getting used to. But it enables him and other test pilots to resize and reorder displays to their liking.

“There’s plenty of challenges to overcome, problems to solve,” LeClair said. “But the cool thing is that we’re shaping the future of our combat air forces. It’s really a marathon, not a sprint, in making this jet perform the way it needs to.”