Lockheed Martin’s F-35 Lightning II is, without a doubt, the most expensive fighter craft in military history. Early production F-35A... 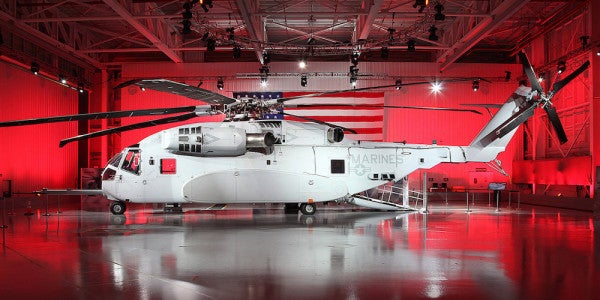 Lockheed Martin’s F-35 Lightning II is, without a doubt, the most expensive fighter craft in military history. Early production F-35A fighters clocked in at a whopping $130 million as of 2016, according to Popular Mechanics, and the Marine Corps’ order for the F-35B vertical takeoff and landing (VTOL) variant will likely end up somewhere around $122.8 million.

Well, Lockheed’s latest project makes the F-35 look like a used Camry. Meet the CH-53K King Stallion, the brand-new $138 million helicopter — and officially now the most expensive aircraft in the Pentagon’s arsenal.

On April 4, the Department of Defense finally approved the King Stallion for use as the Marine Corps’ brand-new heavy-lift helicopter. But Bloomberg reported on Wednesday that the official decision memo for the first run of 26 copters, signed by DoD weapons buyer James MacStravic, came with a nasty surprise: a hidden price increase of 6.9% to $31 billion for 200 helicopters.

That overall cost-hike ended up increasing the DoD’s “program acquisition unit cost” estimate from $131.2 million in August 2016… to a whopping $138.5 million today. As Rep. Niki Tsongas of Massachusetts, the top Democrat on the House Armed Services subcommittee, put it, that’s “a heck of a lot of money.”

To be fair, the King Stallion looks like one heck of a machine, able to haul three times the cargo of the long-lived Lockheed Super Stallion helo without any major change in dimensions. Here's what Task & Purpose's Brian Jones wrote of the new heavy-lift copter in March:

The new CH-53K King Stallion certainly seems to be an excellent iterative development of this combat-tested and combat-proven platform. The new helicopter can hoist an external payload of more than 27,000 pounds, more than triple what the CH-53E could do. The old version, the CH-53E, was just barely too thin to hold a Humvee in its fuselage, the new helicopter can hold a Humvee.

But the skyrocketing cost of the King Stallion is enough to give even the most overzealous weapons-buyer pause. As Popular Mechanics points out, the CH-53K only cost a somewhat reasonable (lol) $56 million in 2003 — although, as of 2013, research and development costs had expanded to encompass nearly 25% of the program’s total cost.

But rising program costs probably aren’t the problem. After all, Bloomberg reports that in a March interview, Lockheed’s CFO cited the CH-53K’s “revenue potential” as the primary factor motivating the company’s purchase of the Sikorsky helicopter unit in 2015. Hey, a few million here, a few million there — pretty soon, we’re talking about real money.