The Pentagon believes that the CH-53K King Stallion heavy-lift helicopter, which at $144 million apiece costs more than the notoriously expensive F-35A Lightning II joint strike fighter, is "the most powerful helicopter the United States has ever fielded" 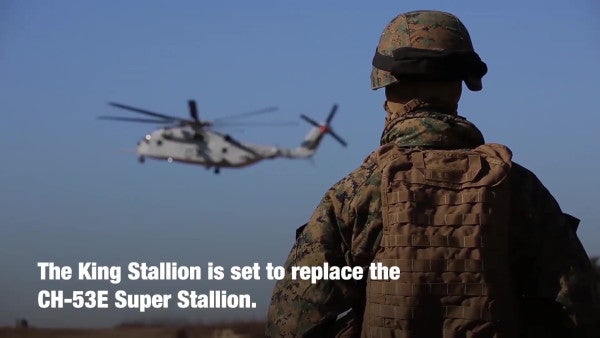 The Pentagon believes that the Marine Corps' new CH-53K King Stallion heavy-lift helicopter — which at, $144 million apiece, costs more than the notoriously expensive F-35A Lightning II joint strike fighter, is “the most powerful helicopter the United States has ever fielded.”

Unfortunately, the pricey helo may not see action downrange anytime soon due to a growing list of worrying technical problems.

The King Stallion, which first landed in the hands of Marines back in May 2018, may not achieve initial operational capability (IOC) as soon as Navy officials originally expected, officials told Vertical Magazine in a Jan. 10 interview first noticed by our friends at The War Zone.

“Discovery of technical issues later than expected and inadequate rate of their closure resulted in a flight test efficiency rate that was less than projected,” Naval Air Systems Command (NAVAIR) spokesman Greg Kuntz told the magazine in a statement “We are evaluating requirements to the program but have not yet made a formal determination on IOC or IOT&E dates.”

The Sikorsky CH-53K King Stallion helicopter is revealed during the rollout ceremony at the Sikorsky headquarters in Jupiter, Florida, on 5 May 2014(Sikorsky/Wikimedia Commons)

While the CH-53K program has racked up an eye-popping $31 billion price tag since the start of development in 2006, the persistence of technical flaws revealed in operational testing are concerning to say the least.

A January 2018 report from the Pentagon's Operational Test & Evaluation office detailed numerous structural problems in the airframe, problems exacerbated by a lack of needed parts. In April 2018, Pentagon officials told Bloomberg News they were monitoring upwards of 1,000 current or projected “mission-impacting technical issues” that present “a high risk” to the airframe.

Those problems include major deficiencies in the main rotor gearbox, unreliable flight speed indications, overheating of essential propulsion elements, anomalies in the tail boom design, and, as Bloomberg News later noted, “exhaust gas sucked back into the engine” — all issues which pose major obstacles to the lifespan and survivability requirements that necessitated the CH-53K program in the first place.

And those issues aren't necessarily new. “Gearbox trouble was among the issues that pushed that timeline back to 2019 in the first place,” The War Zone notes. “To add insult to injury, NAVAIR and Sikorsky had both indicated these long-standing issues had gotten resolved in 2016.”

The CH-53K King Stallion flies at Naval Air Station Patuxent River, Maryland, January 18, 2018. The purpose of this exercise was to show the Capabilities of the CH-53K

While the Pentagon OT&E program listed a target IOC declaration date of December 2019, the Defense Contract Management agency told Bloomberg News that Navy likely won't finish likely won't finish the flight testing designed to uncover new kinks in the King Stallion's systems until May 2020, well after the initially milestone to declare the aircraft ready for action.

If the aircraft ever gets off the ground, it may just be worth it: As Task & Purpose previously reported, the Sikorsky designed the CH-53K to haul up to 27,000 pounds, three times the cargo of the Pentagon's current heavy-lift workhorse, without any significant changes in the airframe dimensions, a major boon for Marines increasingly in the fight downrange and the capability that earned the airframe the “most powerful” moniker.

“[This is] the most powerful helicopter the United States has ever fielded,” CH-53K program chief Marine Col. Hank Vanderborght said at the annual Sea-Air-Space expo back in April 2018, per Military.com. “Not only the most powerful, the most modern and also the smartest.”

He may be right. But unless Sikorsky and Pentagon engineers can work out the structural problems hindering the King Stallion, the expensive helo may never actually get off the ground.

SEE ALSO: The 'Most Powerful' Helicopter Ever Fielded By The US Is Also The Most Expensive

WATCH NEXT: The CH-53E King Stallion