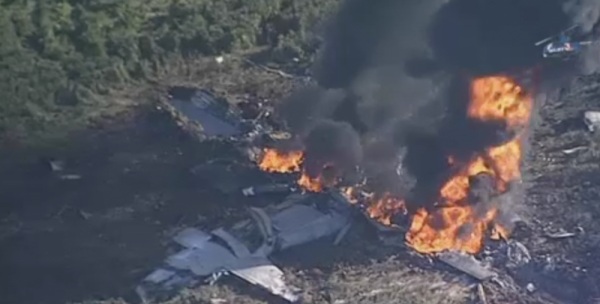 On July 10, a KC-130 ferrying Marine Corps personnel and equipment from Marine Corps Air Station Cherry Point in North Carolina to Naval Air Facility El Centro in California exploded in mid-air over Mississippi, killing the 15 Marines — including six Marines from Marine Corps Forces, Special Operations Command — and one Navy corpsman on board. According to a Marine Corps public affairs officer, the incident marks the worst crash since a CH-53E Super Stallion crashed in Iraq in 2005, killing 30 Marines and one sailor.

Within hours of the incident, the Marine Corps announced an investigation into the cause of the crash. “The identities of the personnel whose lives were lost in this tragic accident are still being withheld to allow time for their loved ones to be notified appropriately,” the Corps said in a statement. “Our focus remains on providing the necessary resources and support to the family and friends of these service members as they go through this extremely difficult time.”

What the Corps neglected to mention is that while the incident is tragic, it’s far from exceptional. The crash of the KC-130 is just the latest in a long series of fatal aviation mishaps for the Marine Corps — a trend that shows no signs of abating.

In general, the Corps has experienced fewer incidents than the Navy over the last 15 years, enduring a total of 123 Class A aviation mishaps between 2002 and 2016 compared to the Navy’s 180, according to April 2017 data from the Naval Safety Center. (For context: Class A mishaps involve fatalities, the loss of an aircraft, or result in more than $2 million in damages. Class C mishaps involve damages of $50,000 to $500,000 and personnel injuries; Class B mishaps describe any accident in between).

But Marine aviation mishaps occur at a significantly higher rate given the size and operational tempo of the Corps, a rate of 2.63 in 2016 compared to the Navy’s 1.27 that same year. And the rate of flight mishaps for Corps pilots has increased dramatically in recent years, from 2.01 in 2012 to 3.94 in 2017, according to data released by the Naval Safety Center on July 10 — the day of the KC-130 crash.

“The facts are that the rate of Class A mishaps per flight hour are going up,” Rep. Mac Thornberry, chairman of the House Armed Services Committee, told Task & Purpose in 2016. “It all depends on what you compare the accident rate to. If you just look at the past few years, there has been a significant increase in Class A mishaps per 100,000 hours of flight. B and C are going up as well.”

These mishaps aren’t just increasingly common occurrences, but increasingly deadly ones. After one Marine died during a CH-53E Super Stallion hard landing at Camp Lejeune in September 2015, Marine Corps Times observed that Marine aviation mishaps had hit a five-year high just nine months into the year. In January 2016, two CH-53Es collided in Hawaii, killing 12 Marines. In December 2016, a Marine Corps MV-22B Osprey landed in the water near Camp Schwab in Okinawa, Japan.

The current scope of the Corps’ aviation mishap crisis is difficult to gauge. As of February 2017, the Marine Corps had nine major aircraft crashes, resulting in 14 fatalities and 11 lost aircraft over a period of 12 months, Military.com reported, and the Naval Safety Center has recorded seven Class A Marine aviation mishaps since October 2016 alone. But while general aviation mishap data up through July 2017 is publicly available on the Naval Safety Center’s website, the organization’s statistics office instructed Task & Purpose that fatality data is only accessible through Freedom of Information Act request or public affairs officer.

When reached for comment by Task & Purpose, the Naval Safety Center's communications chief responded with statistics from just three of the 123 Class A mishaps spanning the last 15 years (an MV-22B crash in Arizona that left 19 Marines dead in 2000, a CH-53E crash in Iraq that killed 30 Marines and a sailor in 2006, and the Hawaii collision in 2016) and did not return additional requests for comment.

So what’s behind these increasingly fatal aviation mishaps? As career Marine Corps pilot and Task & Purpose columnist Carl Forsling noted in 2016, the culprit is likely not a mechanical failure but human error. “There has been an alarming trend in Marine aviation — a high rate of mishaps, many, if not most, involving aircrew error,” Forsling observed in the aftermath of the Okinawa incident. “The story here is almost certainly some form of human error on the part of the aircraft’s crew … those human errors are a lot more likely when pilots don’t get enough practice.

Since the Pentagon’s spending ability has been hampered by sequestration cuts triggered Budget Control Act in 2013, a lack of funding has led to a reduction in hours flown by pilots, crews trained, and aircraft maintained, creating a lack of flight preparedness throughout the military. And while the long-term effect of budget constraints is not immediately clear, the rise in mishap rates, decline in pilot retention pose problems for a Corps needing to get pilots into cockpits.

“When I started flying in the Marine Corps two decades ago, pilots assigned to line units regularly got about 30 hours per month,” Forsling wrote in 2016. “That gradually dropped to 20. With 30 hours, one steadily improves. With 20, one is at least confident in fundamental skills. With 15 and below, one is just focusing on the bare essentials.”

Corps officials seem to agree with the assessment of seasoned pilots. In a House Armed Service Committee hearing on aviation readiness in July 2016, Lt. Gen. Jon Davis, the Marine Corps’ deputy commandant for aviation, testified that newly minted pilots only get half the training hours he had when he commissioned. “Average aircrew flight time has reached historic lows,” Davis said. “Every lost day, every missed hour, is missed experience this nation depends upon in the future.”

But it’s not just the pilots. Aircraft operations across the armed forces, appear in a state of disrepair, with branches dependent on spare parts from discontinued planes and lacking in maintenance crews. At a Heritage Foundation event in July 2016, Thornberry stated that the Air Force was short 4,000 maintainers and more than 700 pilots. In 2015, the Navy had a backlog of 11 planes in need of repairs, and in fiscal year 2017, it was expected to have a backlog of 278. Marine Corps pilots, who require on average 10 hours of flight time each month, were only getting roughly four.

Thornberry’s message to his fellow lawmakers is simple: When it comes to training, listen to what veteran pilots like Forsling are saying. “There are some people who are just against increasing military spending because they’re against increasing any kind of spending,” Thornberry said. “I do not believe those people have talked to the pilots or looked into the matter themselves.”

In the aftermath of the tragic KC-130 crash in Mississippi, it’s unclear how lawmakers and Pentagon officials plan on addressing this problem (Task & Purpose reached out to HASC and the Marine Corps Aviation office for a comment, neither of which immediately responded). But if one thing is clear, it's that the incident hasn't shaken the Corps' faith in the KC-130.

“The KC-130 has one of the lowest mishap rates of all Marine Corps aircraft,” Marine Corps PAO Capt. Sarah Burns said in a statement. “Over the past 15 years, there have been only three Class A Flight Mishaps involving all Marine Corps models of the C-130, including the crash on July 10th. In 2002 there was a mishap in Pakistan which resulted in 7 deaths and a mishap in California with no fatalities.”