Since sequestration began in 2013, the reduced number of hours flown by pilots, crews trained, and aircraft maintained has created... 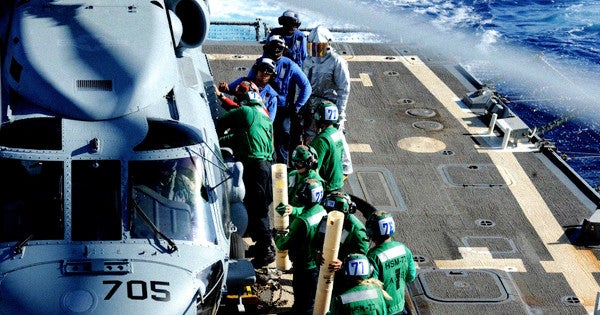 Since sequestration began in 2013, the reduced number of hours flown by pilots, crews trained, and aircraft maintained has created a major problem: a lack of flight readiness across all the services. While the effect of budget constraints was not at first apparent, a rise in-flight mishaps, decreases in pilot retention, and increases in the number of aircraft that simply can’t fly have made it clear to policymakers that U.S. air superiority is suffering.

“The military is increasingly willing to speak up and say, ‘Yes, this is a real problem,’” House Armed Services Chairman Mac Thornberry, a Republican from Texas, told Task & Purpose in a recent interview.

But the fiscal year 2017 National Defense Authorization Act — the bill that provides the budget for the entire Department of Defense — has renewed hope that the military can begin to remedy those issues.

“Our bill does not say, ‘Well this increases flight hours by five a month,’” Thornberry said. “But it tries to turn the corner on all of these factors that are decreasing our readiness and increasing the risk.”

However, the issues did not arise overnight, Congresswoman Madeleine Bordallo, a Democrat from Guam, told the members of the House Armed Services Committee at a hearing on July 6.

“What the services are experiencing now, and what we are working to remedy in the fiscal year 2017 NDAA, are the consequences of years of high operational tempo experienced by fewer aircraft, with fewer experienced operators and skilled military and civilian personnel to sustain them,” she added.

And the numbers paint an alarming picture.

In a Heritage Foundation briefing on July 7, Thornberry reported that currently, the Air Force is short 4,000 maintainers and more than 700 pilots. In 2015, the Navy had a backlog of 11 planes in need of repairs, and in fiscal year 2017, it will have a backlog of 278. And Marine Corps pilots, who require on average 10 hours of flight time each month, are only getting around four.

Related: The Air Force Needs Its Old Planes To Last A Lot Longer »

But these are just a few of the statistics that have decision-makers concerned.

Around the time she began her career as a pilot, the Air Force had 134 fighter squadrons. Now, there are only 55.

“I hear from my friends on active duty about how the forces have been really bleeding significantly over the last years in the readiness area,” McSally told Task & Purpose.

According to McSally, pilots were flying 200 to 250 hours a year a decade ago. Now it’s roughly 120 to 180. Over time, this will become a significant issue when considering the level of aviation mastery that flight leads, aviation instructors, and squadron commanders should have, she said.

“This kind of trend is one where we’re going to have people missing out on critical experience,” McSally added.

During the July HASC hearing, all the services reported that flight hours have dipped to the bare minimum required for pilots to essentially avoid probation.

Lt. Gen. Jon Davis, the Marine Corps’ deputy commandant for aviation, testified that rookie pilots are getting far fewer training hours, roughly half of what he got.

“Average aircrew flight time has reached historic lows,” he added. “Every lost day, every missed hour, is missed experience this nation depends upon in the future.”

But it’s not just the pilots who are affected. Aircraft are in a state of disrepair, with some of the services needing to borrow parts from discontinued planes. Maintenance crews have been sacrificed too. And readiness takes time and stability to rebuild, not just one year of adequate funding.

Related: What Happens When Pilots Aren’t Allowed To Fly »

“Every lost day, every missed hour, is missed experience this nation depends upon in the future.”

“Our readiness is imbalanced at a time when the Air Force is small, old and heavily tasked,” West added.

The impact of the imbalance is reflected in aviation mishap rates not just in the Air Force, but across all the services.

Class A mishaps are categorized as those where there is a fatality, the loss of an aircraft, or an incident result in more than $2 million in damages. Class C mishaps involve damages of $50,000 to $500,000 and personnel injuries. Class B mishaps cover everything in between.

Since October 2014, the Air Force has reported 27 Class A mishaps, the Navy has had 30, and the Army suffered 43. And just this year, the Marine Corps’ Class C mishap rate doubled.

“The effect multiplies over time. Whatever you see today — it will become worse tomorrow and the next day,” Thornberry stated.

What’s more, key airspace stakeholders like China and Russia have been putting a great deal of spend toward new military aircraft and increased hours of flight training — something that McSally is particularly concerned with.

If Russia made a run at the Baltics, she suggested, “We would not have air superiority.”

“If we think that all we’re going to be doing for the next years is counterinsurgency deployments against threats like ISIS,” she added, “that is a very naive view of what our military might be asked to do.”

“There is concern among some of our pilots that our adversaries are getting more training hours.”

“There is concern among some of our pilots that our adversaries are getting more training hours,” he said. “One of the things they’re concerned about is the sophistication of the aircraft from some of these air-peer competitors, plus the training that their pilots are getting make them a real threat in a way that we have not faced at least since the fall of the Soviet Union.”

Both McSally and Thornberry voiced apprehension over the fact that our fleets across the services are smaller and older than they’ve been in decades. And across the board, U.S. aircraft are aging faster than they can be replaced.

While new aircraft are expensive, as demonstrated by the laundry list of shortfalls experienced by the F-35, the maintenance cost to keep older planes in the air is not necessarily any more efficient than purchasing new ones. And there is little relief in sight.

In a later segment of the hearing, Bordallo asked the service chiefs if they thought the solution was stable, predictable budgets or an increase in funding.

The response from all four branches was unanimous: They need both.

But it’s unclear whether or not that is possible. Though Thornberry suggested that the fiscal year 2017 NDAA is a good starting point.

As for those in Congress and the administration who don’t support an increase in military spending — particularly regarding aviation readiness — McSally and Thornberry surmised that they simply don’t recognize the danger.

“There are some people who are just against increasing military spending because they’re against increasing any kind of spending,” Thornberry said. “I do not believe those people have talked to the pilots or looked into the matter themselves.”