Will One Of These Experimental Aircraft Replace The Legendary A-10 Warthog?

There’s a damn good reason the A-10 Thunderbolt II, lovingly nicknamed the “Warthog” by U.S. Air Force pilots, is considered... 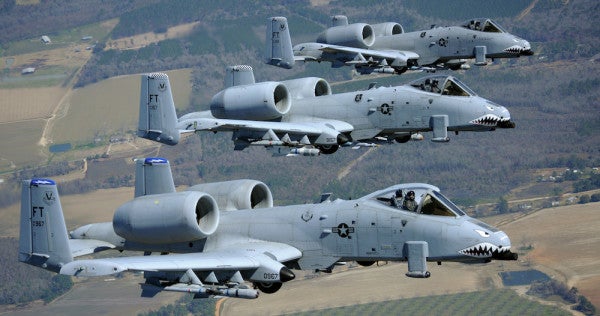 There’s a damn good reason the A-10 Thunderbolt II, lovingly nicknamed the “Warthog” by U.S. Air Force pilots, is considered the best close-air support attack aircraft in the Pentagon’s arsenal.

Built by Fairchild Republic in the early 1970s, the characteristic “BRRRT” of the A-10’s 30 millimeter cannon tends to strike fear into the hearts of all who hear it, earning a reputation as “a badass airplane with a big gun on it,” as Martha McSally, a Republican congresswoman and the Air Force’s first female fighter pilot, put it in April: “The folklore as A-10 pilots that we pass around is that we built the gun, and told the engineers, ‘Figure out how to fly this gun.'”

But the era of the Warthog’s dominance may be coming to an end. Since March 2016, the Air Force hasbeenconsidering a new class of low-cost, light-attack warplanes under its “OA-X” program to augment the Warthog during close air support missions.

While Air Force Materiel Command Gen. Ellen Pawlikowski reiterated the following October the Pentagon plans on sustaining its A-10 fleet “indefinitely” (not to mention a $2 billion Boeing contract to replace the jets’ wings through 2028), the branch recently solicited defense contractors to participate in the OA-X Capability Assessment of Non-Developmental Light Attack Platforms — the Air Force’s light-attack aircraft experiment — at New Mexico’s Holloman Air Force Base this coming July. From Popular Mechanics:

The OA-X, or “Observation, Attack, concept,” envisions a small, nimble airplane that can carry a large payload of sensors and weapons. Flown by a pilot and copilot/observer, the small plane could carry out strike and close air support missions in support of ground troops.

OA-X is seen as half of a two airplane solution for eventually replacing the A-10 Thunderbolt. OA-X is a smaller, cheaper plane that would thrive where the air defense threat is limited to shoulder-fired missiles and machine guns. Another key requirement is that the plane be cheaper to fly per hour than the F-35 Joint Strike Fighter or A-10. The F-35 costs a whopping $42,000 an hour to fly, while the A-10 costs $17,000 an hour. The Air Force envisions the OA-X costing about $4,000 to $5,000 an hour.

As of this writing, there are three different aircraft participating in the upcoming OA-X trials. Here’s a brief, brief overview.

An A-29 Super Tucano taxis across the airfield at Hamid Karzai International Airport, Afghanistan, Jan. 15, 2016.Photo via DoD

On May 12, the Sierra Nevada Corporation and partner Embraer Defense & Security announced its intent to send the A-29 Super Tucano to Holloman. First introduced in 2003 and designed for aerial reconnaissance and light air support operation, the turboprop aircraft was previously selected by the Air Force in 2013 for its Light Air Support program and equip the Afghan Air Force with 20 A-29s between 2015 and 2018. According to Embraer, the Super Tucano comes equipped with two internal .50-cal machine guns with space for additional underwing armaments like 20mm gun pods or MK-81 and Mk 82 bombs.

An AT-6 Wolverine in flight.Photo via DoD

On May 15, defense contractor Textron Aviation announced it would field two aircraft at OA-X, the Beechcraft AT-6 Wolverine and AirLand Scorpion. Beyond the fighter’s HMP-400 .50-caliber guns Textron boast that the turboprop Wolverine, currently used as trainer by both the Air Force and Navy, is “the first fixed-wing aircraft to employ 2.75” laser-guided rockets successfully,” and the aircraft is adaptable to carry all manner of ordnance from the aforementioned MK munitions to the ubiquitous Paveway II GPS and laser-guided bombs to AGM-114 Hellfire missiles.

Despite Textron’s past bad luck in courting Air Force interest, the Wolverine seems like the only stiff competition to the Super Tucano. The late Air Force pilot and diplomat Robert F. Door published an in-depth comparison between the two aircraft back in 2013:

“My view is that the Super Tucano is a bruiser,” said Col. Michael Pietrucha, a back-seater who has worked in light attack for the last six years. “It’s going to be tough, heavy, and will handle rougher fields with a heavier combat load. It has more internal expansion room.

“The AT-6B is a fencer,” said Pietrucha. “It has the mission computer from the A-10, HOTAS from the F-16, a HUD from the F-18, and parts and logistical commonality with the T-6 trainer. It carries more fuel, has fancier avionics (including SADL [Situational Awareness Data Link] and HMS [Helmet Mounted Sight]), and six hardpoints allows you a little more mission flexibility. It’s very small, making it easy to park and hard to hit.”

An AirLand Scorpion in flightPhoto via DoD

The same can’t really be said for Textron’s internally funded Scorpion, the only jet in the competition so far. Unveiled to the public in 2013 at the low, low price of just $3,000-an-hour to fly, the Scorpion has shown trouble gaining traction with foreign buyers, according to the National Interest:

Export customers are often reticent to buy aircraft that the domestic customer is unwilling to purchase for its own use. With the U.S. Air Force’s official stamp of approval and a purchase of some number of Scorpions for its own use, the jet’s chances on the international combat aircraft market would be greatly improved.

“The foreign customers are also very interested in this U.S. Air Force program because they like to see what the U.S. Air Force is doing,” Donnelly said. “So I think that is a – I don’t know if that helps or hurts, but certainly something that they’re watching as well. But anyway, I would say, the international conversations continue.”

Regardless of how these three aircraft fare at the OA-X trials in July, one thing is certain: None of them will ever fully replace the A10 as the Air Force’s preeminent bearer of death from above.