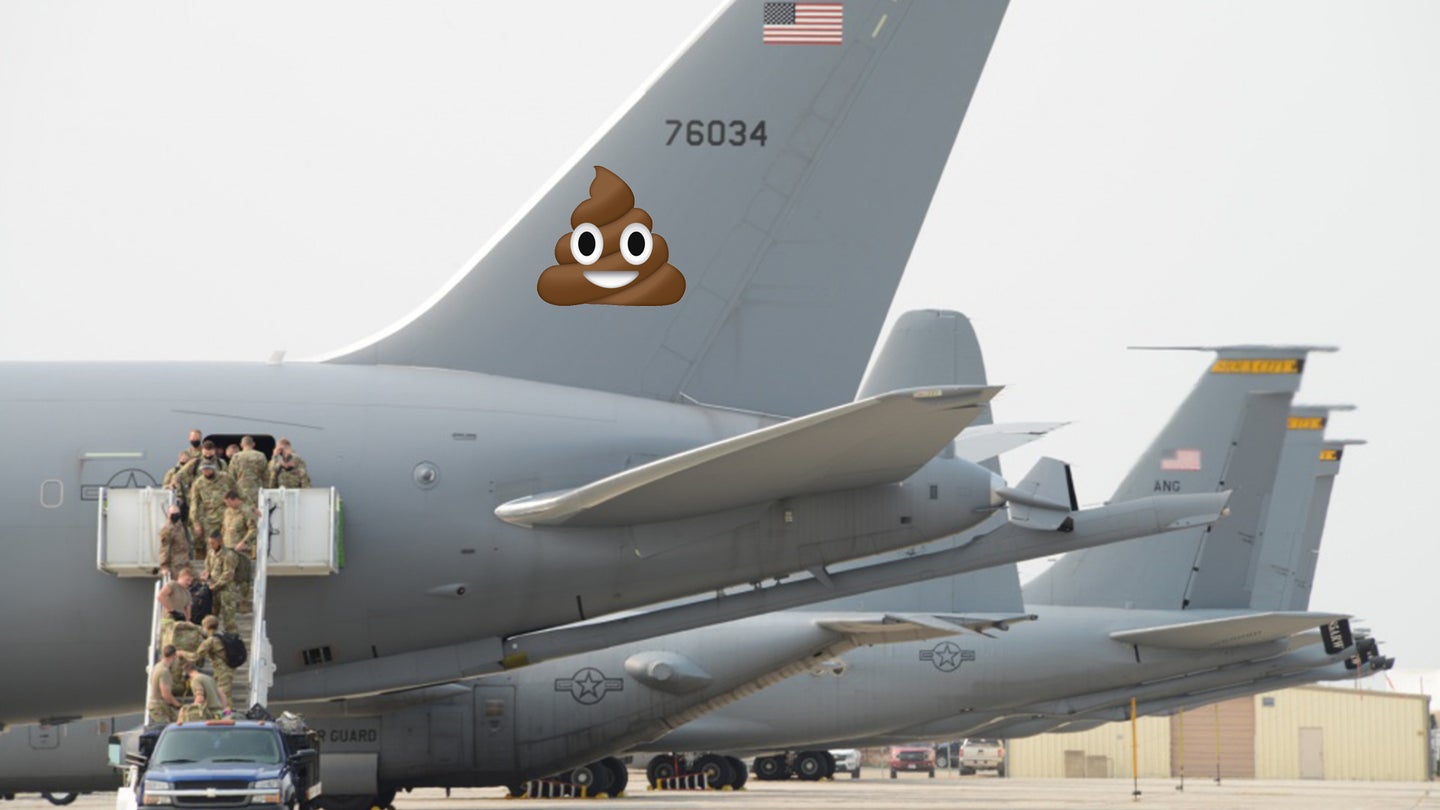 The Air Force’s KC-46 refueling tanker aircraft has been through a lot of sh*t the past few years, and now literal droppings are the latest of the beleaguered aircraft’s troubles. The aircraft features a lavatory/galley combination unit that can’t fit inside the KC-46 the way it does aboard other aircraft, which means that the toilet spills poo everywhere if the plane is in a steep dive or climb.

The messy airplane bathroom has even gotten the attention of Congress. In a hearing on Tuesday, Sen. Jeanne Shaheen (D-N.H.) delicately asked the head of U.S. Transportation Command, Army Gen. Steve Lyons, about the stinky problem.

“There’s an issue that I had not heard about with respect to the transportable galley/lavatory systems, essentially the bathrooms, that make missions um … problematic,” Shaheen told Lyons. “Is this a new problem? Or have we known about this and what’s the prospect to fix it?”

Lyons said he did not know enough to comment on that particular issue, but he acknowledged there was still “a range of category deficiencies” to be fixed before select KC-46s can be ready to hit Transportation Command’s goal of flying limited missions as early as this summer.

The Air-Transportable Galley-Lavatory, as the palletized bathroom/galley unit is called, has been in service since the early 1980s and is loaded and flown aboard a range of Air Force transport and tanker aircraft, said Capt. Christopher Herbert, spokesperson for Air Mobility Command. According to one informational video, the ATGL looks a lot like the little kitchen you see in the back of any commercial passenger jet, with two bathroom stalls on the other side.

There are three separate issues with ATGLs these days, Herbert explained, one of which is this particular doo-doo.

First, many of the specialized Air Force crappers are unserviceable or only partly capable because the Air Force is still figuring out how to contract out maintenance of the units. Second, all the airborne heads require a restraint modification upgrade to be fully functional (which are used to secure the ATGLs to the floor, according to Air Force Magazine), and the Air Force is still catching up to the increased demand from KC-46 jets.

Lastly, the KC-46 has a unique floor loading system which means the commode has to be turned at an unusual angle to fit securely inside the aircraft. The new configuration “could potentially result in spillage issues during steep ascents and descents,” Herbert explained.

Air Mobility Command will soon test a potential solution for the spillage issue, and in the meantime, the flying latrine can still be used on KC-46s at a reduced capacity, Herbert said. So as long as there’s not too much stuff in there, it won’t get on the floor.

The good news is that the KC-46 won’t need the ATGL on all its missions. A multi-role aircraft, the KC-46 can also fly passenger and cargo flights and aeromedical evacuations. The ATGL is essential for passenger flights, where the aircraft can carry up to 114 passengers in an emergency, according to The War Zone. When the aircrew is flying a non-passenger mission, they can just use the smaller aircrew lavatory, Herbert explained.

That’s good news because the Air Force needs new refueling tankers as soon as possible. The service is in the midst of replacing its aging KC-135 and KC-10 fleet, which have been used since the 1950s and 1980s, respectively. Meanwhile, the military is gearing up to fight China across the mind-bogglingly vast Pacific Ocean, over which tankers will be just as important as fighter jets and long-range bombers. Without tankers, all other aircraft will run out of gas long before they reach the target.

The thing is, between the dilapidated KC-135s and constant delays in the KC-46 delivery process, the Air Force anticipates a shortage of tankers over the next five to seven years, the Congressional Research Service wrote in November. Even before the lavatory issues surfaced, the tanker was stricken with a long list of issues, all of which contributed to years-long delays for the roll-out of the KC-46. The list includes the followin, according to CRS:

— a refueling boom that isn’t suitable for some receiving aircraft

— a shoddy cargo restraint system that made cargo shift around in flight, a problem which has crashed aircraft in the past

The issues are incredibly aggravating for lawmakers, who paid manufacturer Boeing $35 billion to develop the aircraft in their initial contract way back in 2011. It could take several more years before the aircraft are fully ready for all refueling missions.

Well, hopefully soon at least there’ll be a little less crap to deal with.

Related: The Air Force wants privacy curtains so you can poo while you B-52