What comes next in the pursuit of Julian Assange

Assange is in custody of British authorities, and awaiting trial until May. The U.S. also hopes to extradite him for separate charges 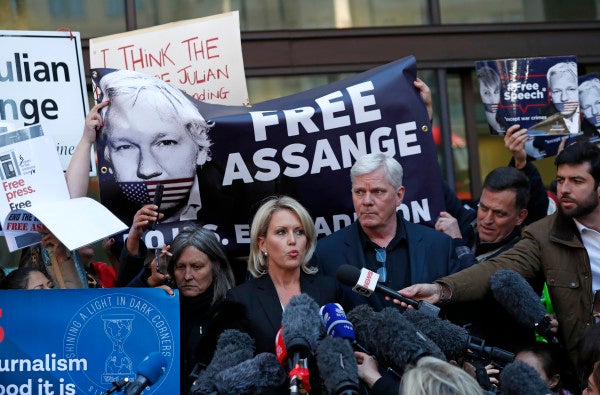 A bearded (and quite pale) Julian Assange was dragged from the Ecuadorian embassy on Thursday, which the UK Home Office says came “in relation to a provisional extradition request” from the United States. The Department of Justice has charged him with “conspiracy to commit computer intrusion” with then-Army Intelligence analyst Chelsea Manning.

Following Assange's arrest, he was taken before the Westminster Magistrates Court. According to BBC News' Daniel Sandford, he was found guilty of failing to surrender to bail in June 2012; Assange's lawyers argued he would not have faced a fair trial, forcing him to seek refuge at the Ecuadorian embassy that same month, per CNN.

He will face the Southwark Crown Court at an unknown date for sentencing on the bail charge, which the AP reports could be up to 12 months behind bars. His next known court appearance is scheduled for May 2, “by video link,” per Sandford, “on the extradition matter.”

The DoJ clams in the indictment, in 2010, Assange “agreed to assist Manning in cracking a password” to access Pentagon computers connected to a government network containing classified material. Per the DoJ, Assange “actively” encouraged Manning to provide him with classified documents.

The indictment also says that “part of the conspiracy” was that Assange and Manning used a “special folder on a cloud drop box … to transmit classified records containing information related to the national defense of the United States.”If found guilty, he could face up to five years in prison.

“The primary purpose of the conspiracy was … transmission of classified information related to the national defense of the United States so that WikiLeaks could publicly disseminate the information on its website,' the DoJ wrote.

National security attorney Brad Moss detailed the next steps for extradition in an interview with Task & Purpose; the first is that the U.S. government will submit a packet to the British government which outlines the basis for extradition, and assure them that this is “a legitimate prosecution for viable and serious crimes and it's not just political persecution.”

“What the government submits will no-doubt be viewed initially as more than sufficient, I certainly assume Mr. Assange's team will try to challenge it, which may delay his ultimate extradition by weeks or months,” Moss said. “They'll try to drag it into the courts claiming this is just persecution of him for his political views and his publishing of documents that were damaging the United States government. I expect that will fail.”

The argument in defense of Assange you'll continue to see over the next few days hinges on press freedom concerns. While some argue that Assange's arrest sets a dangerous precedent, the DOJ says his charges are specifically related to computer hacking, not the publishing of classified documents.

Whistleblower Edward Snowden tweeted that the arrest is “a dark moment for press freedom,” and the director of the American Civil Liberties Union's Speech, Privacy, and Technology Project Ben Wizner said in a statement that prosecuting Assange for WikiLeaks' publishing “would open the door to criminal investigations of other news organizations.”

DoJ spokesman Joshua Stueve, when asked by Task & Purpose for comment about press freedom concerns, responded that “the charges are conspiracy to hack classified U.S. government computer systems. There is no reference to journalism or publishing in the indictment. Computer hacking is not a function of journalism.”

“My original concerns that any prosecution of Assange would potentially implicate broader policy ramifications about press freedoms … thankfully have been put to the side,” Moss told Task & Purpose. “This is a very narrow indictment, it only deals with the conspiracy to hack the government system.”

Moss said the extradition of Assange to the U.S. could take anywhere from days to months. Meanwhile, Assange will be kept in custody until his next hearing in May, CNN reports; his attorney Jennifer Robinson, speaking to reporters after she met with her client on Thursday, said he had one message to give: “I told you so.”

SEE ALSO: Chelsea Manning Is Headed Back To Jail