Wikileaks’ Julian Assange Reportedly Tried To Get A Russian Visa

Wikileaks founder Julian Assange reportedly tried to obtain a Russian visa in 2010, according to the Associated Press. In a... 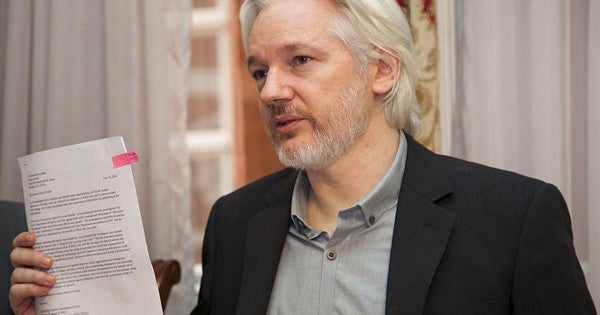 Wikileaks founder Julian Assange reportedly tried to obtain a Russian visa in 2010, according to the Associated Press.

In a letter to the Russian consulate in London obtained by AP dated Nov. 30, 2010, Assange wrote: “I, Julian Assange, hereby grant full authority to my friend, Israel Shamir, to both drop off and collect my passport, in order to get a visa.” The AP also obtained a notarized copy of Assange's Australian passport, which was mentioned in his letter.

U.S. officials have long maintained that Wikileaks has received support from Russian intelligence, or as then-CIA Director Mike Pompeo put it in 2016, was a “hostile intelligence service” in and of itself. But even before the site began dumping thousands of hacked emails from the Democratic National Committee during the 2016 election, Assange has cultivated a number of ties to Moscow.

First and foremost is the name Assange mentions in the consular letter: Israel Shamir. A longtime friend and employee of Wikileaks, the Russian-born Shamir was tasked in 2010 with disseminating documents stolen by Chelsea Manning to Russian news organizations and other Baltic states. The details, according to Vox:

The first thing Shamir did with the documents was hand some off to Russian Reporter magazine, a Kremlin-friendly newsweekly. He then offered to sell access to them to the highest bidder, David Leigh and Luke Harding write in the book Wikileaks: Inside Julian Assange’s War on Secrecy.

But what he did next was exceptionally curious. Shamir traveled to Belarus, a country ruled by dictator Alexander Lukashenko and perhaps Putin’s staunchest ally in Europe. Shamir was a fan of Lukashenko; in a 2010 piece, he called Belarus “the Shangri-la of the post-Soviet development.”

Assange was later personally defended in the media by Russian President Vladimir Putin, and in 2012, got his own television show on Russia Today (RT).

The official Wikileaks Twitter account, which many believe to be controlled directly by Assange, criticized the AP report in a tweet, saying that Assange “did not apply for such a visa at any time or author the document,” alleging that a former Wikileaks volunteer fabricated it.

Shamir, however, said in a Russian radio interview in 2011 that he personally brokered a Russian visa for Assange, but it did not come in time for him to avoid the Swedish investigation into alleged sex crimes.