London police were invited into the embassy at Ecuador's request — Assange finally pissed them off enough. 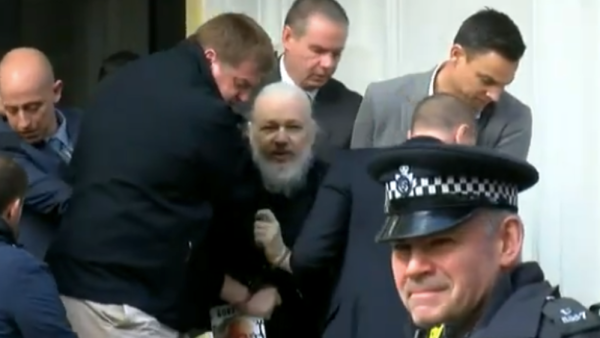 Julian Assange was hauled out of the Ecuadorian Embassy on Thursday looking like he’s about to be extradited to the United States on computer hacking charges and/or begin filming the pilot episode of a new interview show on Netflix.

London police were invited into the embassy at Ecuador’s request — Assange finally pissed them off enough — and the cops subsequently hauled out Old Man WikiLeaks and threw him into a waiting police van.

You can watch the arrest below:

After his arrest, the U.S. Department of Justice unsealed charges against him, which amount to “conspiracy to commit computer intrusion for agreeing to break a password to a classified U.S. government computer” — stemming from his 2010 conversations with then-Army Pfc. Bradley Manning.

The indictment alleges that in March 2010, Assange engaged in a conspiracy with Chelsea Manning, a former intelligence analyst in the U.S. Army, to assist Manning in cracking a password stored on U.S. Department of Defense computers connected to the Secret Internet Protocol Network (SIPRNet), a U.S. government network used for classified documents and communications. Manning, who had access to the computers in connection with her duties as an intelligence analyst, was using the computers to download classified records to transmit to WikiLeaks. Cracking the password would have allowed Manning to log on to the computers under a username that did not belong to her. Such a deceptive measure would have made it more difficult for investigators to determine the source of the illegal disclosures.

While many will hem and haw about press freedom and the 1st Amendment and all that jazz, journalists and publishers don’t have legal protection when they encourage or assist a source in committing a crime. Of course, these are allegations so Assange could ultimately be found innocent of these charges, but he’ll forever be guilty of sporting a terrible beard that would only be permissible in Amish country.