OTTAWA (Reuters) – An armed member of the Canadian military who drove a truck through gates protecting the part of... 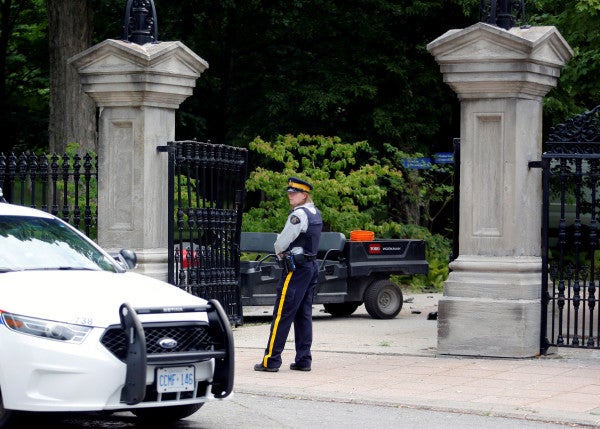 OTTAWA (Reuters) – An armed member of the Canadian military who drove a truck through gates protecting the part of Ottawa where Prime Minister Justin Trudeau lives was acting alone and now faces 22 charges, police said on Friday.

Trudeau was not at home when the incident occurred on Thursday morning. Trudeau and his family live in a large house on the grounds of Rideau Hall, which sits on an 88-acre (0.35 square km) wooded estate.

Police named the suspect as Corey Hurren, 46, who had driven 2,000 km (1,240 miles) from the central province of Manitoba to Ottawa. His truck broke down after he hit the gates and he was later arrested without incident.

“There is no risk to the public and from what (information) we have, he was acting alone,” Royal Canadian Mounted Police Deputy Commissioner Mike Duheme told a news conference.

Hurren – armed with several weapons, including a rifle – was later charged with 22 offences. These include uttering threats, “possession of a weapon for dangerous purpose” and contravening rules on the transportation of firearms.

There is little history of serious violence targeting officials in Canada. Trudeau, however, donned a bulletproof vest for an election campaign rally in October last year after officials detected a security threat.

(Reporting by David Ljunggren in Ottawa; Editing by Matthew Lewis and Marguerita Choy)