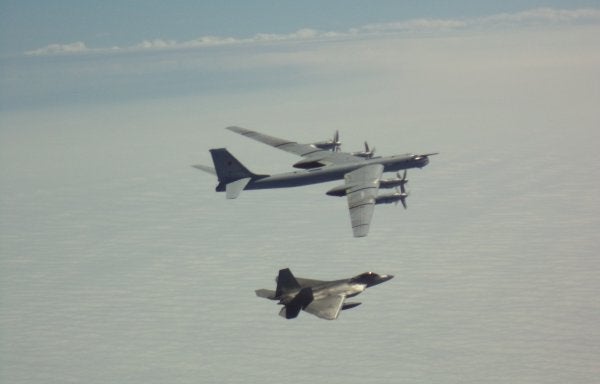 The first formation, which came within 20 nautical miles of Alaska, consisted of a pair Tu-95 bombers escorted by two Su-35 fighter jets and an A-50 airborne early warning and control aircraft, NORAD said.

The second formation, which came within 32 nautical miles of Alaska, consisted of another pair Tu-95 bombers and an A-50 aircraft.

NORAD tasked F-22 Raptors supported by KC-135 Stratotankers and an E-3 Airborne Warning and Control System to conduct the intercepts.

“Despite the challenges posed by COVID-19, NORAD’s remains ready and poised to defend the homelands 24 hours a day, 7 days a week, 365 days a year,” NORAD chief General Terrence J. O’Shaughnessy said in a statement. “On several occasions, we have intercepted multiple Russian aircraft operating near Alaska and we will continue to do air patrols to protect the approaches to our nations.”

“I offer that level of detail to illustrate the point we will continue to execute our homeland defense missions with the same capability and capacity we always bring to the fight,” he added. “That does not happen by luck. It happens because we taking deliberate – and at times, difficult – measures to ensure we are able to conduct our no-fail missions.”

On March 14, NORAD tasked F-22 Raptors to intercept two pairs of Russian Tu-142 maritime reconnaissance planes as they entered ADIZ from the west and north of Alaska, the command's second and third intercepts that week.

“We continue to see repeated Russian military aviation activity in the Arctic and we will defend the U.S. and Canada against these threats emanating from our northern approaches,” O’Shaughnessy said at the time.