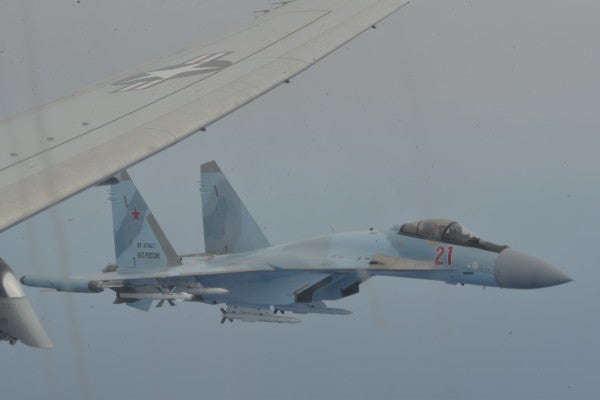 The U.S. Navy accused Russian pilots of flying in an “unsafe and unprofessional” manner near a P-8A reconnaissance plane over the Mediterranean Sea, according to a statement released Tuesday.

“The unnecessary actions of the Russian Su-35 pilots were inconsistent with good airmanship and international flight rules, and jeopardized the safety of flight of both aircraft,” the statement said.

The Navy released multiple photos and video showing the Russian plane coming close to the wings of the P-8 on Tuesday, which restricted its ability to safely maneuver as it flew over international waters in the Eastern Mediterranean Sea, the service said.

The incident lasted for roughly 65 minutes and was unprovoked, according to the statement.

A military version of the Boeing 737, the P-8A Poseidon's portfolio includes airborne and underwater surveillance. Its array of sensors are used to spot submarines, ships, and other aircraft.

The Navy pilots behind the P-8 fleet seem to regularly get an airborne privyet from their Russian counterparts. As the Navy statement points out, this latest incident follows two others in April. And in Jan. 2018, a Russian Su-27 flew within five feet of the spy plane, according to CNN, which also reported that an Su-30 months prior had performed a barrel roll near a P-8, forcing the aircraft to experience “violent turbulence.”

The Navy has posted a video of the incident on YouTube.