The Russian vessel came within 60 yards of a U.S. Navy destroyer before altering course 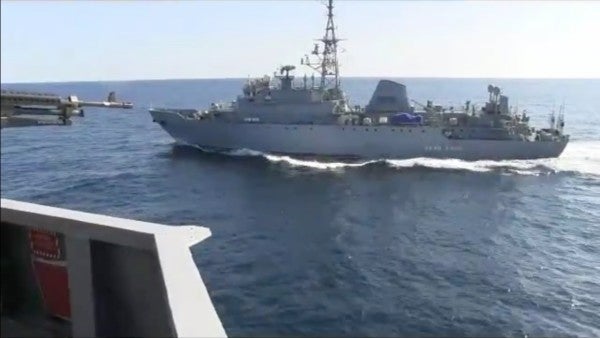 That's the kind of driving the crew of the Arleigh Burke-class guided missile destroyer USS Farragut had to deal with in the Arabian Sea on Thursday when the Ivan Khurs, a Russian Navy intelligence collection ship, aggressively approached the U.S. Navy destroyer and came within 60 yards of the U.S. vessel before altering course and falling behind it, a Navy spokesman told Task & Purpose.

“Farragut sounded five short blasts, the international maritime signal for danger of a collision, and requested the Russian ship alter course in accordance with international rules of the road,” Lt. Peter Pagano, a spokesman for the U.S. 5th Fleet, said in a statement. “The Russian ship initially refused but ultimately altered course and the two ships opened distance from one another.”

“While the Russian ship took action, the initial delay in complying with international rules while it was making an aggressive approach increased the risk of collision,” Pagano added.

The 5th Fleet shared dramatic video of the encounter on Twitter.

Farragut sounded five short blasts, the international maritime signal for danger of a collision, and requested the Russian ship alter course in accordance with international rules of the road. pic.twitter.com/OGCeAGKOy3

This isn't the first time a Russian vessel has come dangerously close to a U.S. Navy warship at sea.

This past June, Russian destroyer Admiral Vinogradov came within 165 feet of the USS Chancellorsville in the East China Sea. Notably, some of the Russian sailors appeared to be sunbathing during the near-collision, which on an American highway would probably count as distracted driving.

The near-collision comes as tensions in the region between the U.S. and Iran have soared to a historic high — and as Russian influence in the region, often in the form of weapons sales, appears to be growing unabated.