A Russian spy ship sank in the Black Sea on Thursday after colliding with a vessel 25 miles off the... 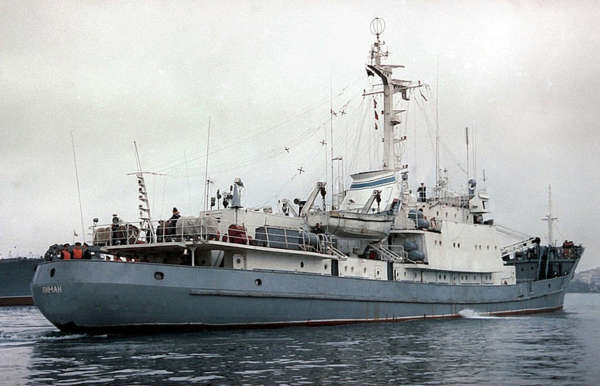 A Russian spy ship sank in the Black Sea on Thursday after colliding with a vessel 25 miles off the coast of Turkey’s busy Bosphorus Strait, the Associated Press reports.

But this was no war game or close call by aggrieved geopolitical foes, but an embarrassing mistake: The Russian Navy vessel Liman, a 1,560-ton reconnaissance ship classified as a “research ship” with the country’s Black Sea Fleet, sank after colliding with a freighter full of sheep out of Romania.

The War Zone has some additional context on the Liman and the Bosphorus Strait:

Despite its official classification, the Liman, a Project 861 Moma-class, is designed to gather intelligence above and below the waves. The ships have radars, hydro-acoustic listening gear, and other, unspecified “reconnaissance equipment,” according to RT. These sensors allow the crew to locate, track, and scoop up information about both surface ships and submarines. Before the accident, Russia had three of these Polish-built Soviet-era ships, which have a displacement of 1,560 tons, still in service.

Collisions and other accidents in and around the narrow Bosphorus are not unheard of. A major shipping route and the only way in and out of the Black Sea, civilian and military ships frequently make the passage. A list on Wikipedia describes some of more than 450 incidents, which included numerous wrecks and fatalities, which occurred between 1953 and 2002.

The Turkish Coast Guard eventually retrieved all 78 Liman crewman, the Russian Defense Ministry said in a statement: “All of the crew members of the Black Sea Fleet’s research vessel Liman are safe and sound and are preparing for evacuation from a Turkish rescue vessel to a Russian ship.”

While the cause of the collision is unclear, local authorities told Reuters that “fog and low visibility” in the area were likely factors. The Russian Black Sea Fleet told Interfax that the Liman “had followed all the rules of sailing and maneuvering,” adding that the incident “had been caused by the other ship,” according to the BBC.

The Jupiter, a Moma-class vessel similar to the Liman, at sea with the Soviet Navy circa 1987.Photo via DoD

Former Black Sea Fleet commander Admiral Viktor Kravchenko told Interfax that the collision between the two vessels was “out of the ordinary,” adding that “there have been collisions but I do not remember a case like this, of a vessel, a warship sinking after it.”

Regardless of the reason, it’s hard not to read into the incident given the geopolitical and strategic significance of the Strait. From the New York Times:

Russia’s ability to keep its Black Sea fleet moored on the shores of Crimea was cited as one of the main motivations behind President Vladimir Putin’s move to annex the peninsula in 2014. Shortly after, Mr. Putin announced a program to modernize the fleet, which received six new submarines, as well as several frigates and some smaller vessels; plans are underway for even more ships.

Russian vessels passed through the Bosporus even at the height of a diplomatic crisis between Russia and Turkey, after Turkey shot down a Russian jet that flew over its territory during a mission along the Turkish-Syrian border.

Turkey and Russia support different sides in the Syrian civil war, but increasingly coordinate on some issues in the conflict. They worked together to organize the peace talks in Astana, Kazakhstan, between the Turkish-backed rebels and the Russian-backed government, while Russian jets avoid targeting Turkish-backed militias fighting in northern Syria.

“Fog and low visibility,” suuuuuuuure. We have other ideas: