As the relationship between the United States and the Philippines continues to fray, Filipino president Rodrigo Duterte is turning to... 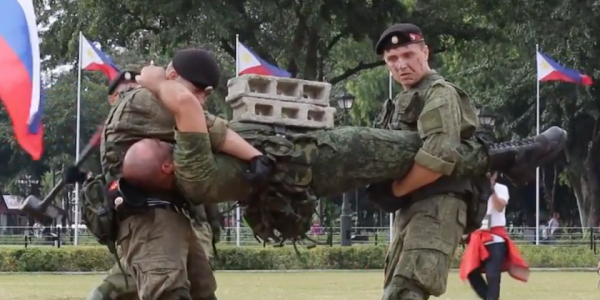 As the relationship between the United States and the Philippines continues to fray, Filipino president Rodrigo Duterte is turning to Moscow for support. And the Russians, who’ve just pledged to supply the Philippines with sophisticated weapons, seem eager to seize the opportunity to draw a longtime ally of the U.S. deeper into its sphere of influence. But rather than breaking bread, the Russians have opted instead to break bricks. Piles of them.

On Jan. 6, during a “goodwill visit” to the Philippines, a group of Russian Marines put on a little performance for their Filipino counterparts that looked like a scene straight out of Jean-Claude Van Damme’s 1988 cinematic masterpiece, “Bloodsport.” The demonstration included a sequence of sweet karate stunts, like using a sledgehammer to smash bricks placed on a man’s abdomen and punching through wooden boards in quick succession.

The performance appears to have been choreographed to appeal to Duterte’s appetite for violence. Also known as“Duterte Harry,” the Filipino president, who assumed office in June 2016, has achieved international notoriety since launching a bloody war on drugs that, according to Al Jazeera, has claimed around 6,000 lives. In May, when Duterte was still mayor of Davao City, a resident told reporters that if her city’s mayor was ever elected president “blood flow like a river,” and it certainly has.

Earlier this week, Rear Adm. Eduard Mikhailov, head of the Flotilla of the Russian Navy Pacific Fleet, said that Russia wanted to hold maritime exercises with the Philippines as part of an effort to combat terrorism and piracy.