President Donald Trump dismissed FBI Director James Comey on Tuesday following a misstatement during his testimony before a Senate Judiciary... 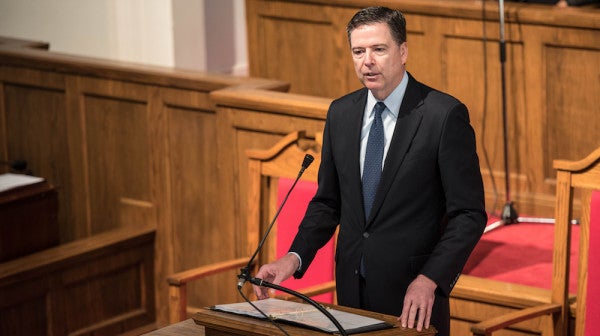 “The president has accepted the recommendation of the Attorney General and the deputy Attorney General regarding the dismissal of the director of the Federal Bureau of Investigation,” Spicer told reporters.

Earlier on Tuesday, the FBI had notified members of Congress that Comey had “misstated” the agency's findings in its investigation of Hillary Clinton's private email server. In his testimony, Comey had stated that “hundreds and thousands’’ of sensitive emails had been forwarded by Clinton aide Huma Abedin to her husband, former Congressman Anthony Weiner. In reality, only a “small number” were forwarded along to Weiner, the agency clarified in a letter to the Senate Judiciary Committee on Tuesday.

In a statement Tuesday, Trump said his abrupt dismissal of the FBI chief was meant to restore “public trust and confidence,” in the law enforcement agency, the Associated Press reports.

“The FBI is one of our nation’s most cherished and respected institutions, and today will mark a new beginning for our crown jewel of law enforcement,” the president said.