Which Countries Spent The Most On Military Might In 2016, In One Chart

Global military spending rose for the second consecutive year in 2016, reaching $1.686 trillion, according to new data compiled by... 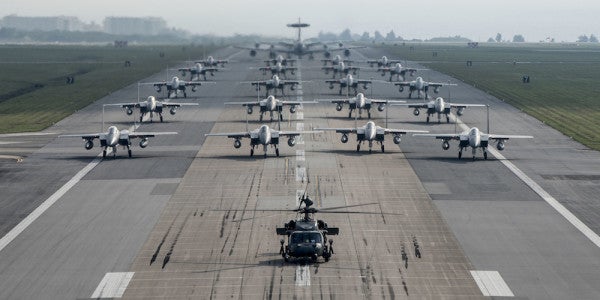 Global military spending rose for the second consecutive year in 2016, reaching $1.686 trillion, according to new data compiled by the Stockholm International Peace Research Institute (SIPRI). The increase was primarily centered in Western Europe and North America — the latter saw its first annual increase since 2010 — and the United States unsurprisingly continues to lead the pack:

The increase in U.S. military spending “may signal the end of a trend of decreases in spending, which resulted from the economic crisis and the withdrawal of U.S, troops from Afghanistan and Iraq,” SIPRI said — although U.S. spending in Afghanistan remains significantly lower than its peak in 2010 during the troop “surge.”

“Despite continuing legal restraints on the overall US budget, increases in military spending were agreed upon by Congress,” said SIPRI Arms and Military Expenditure director Dr. Aude Fleurant. “Future spending patterns remain uncertain due to the changing political situation in the USA.”

Well, not that uncertain: Chances are this is only the beginning of a new surge in U.S. military spending. In February, President Donald Trump announced his intent to push for a 10% increase to the U.S. defense budget, adding $54 billion.