When discussing societal ills, people start talking about mandatory national service as a solution. A lot of this comes from... 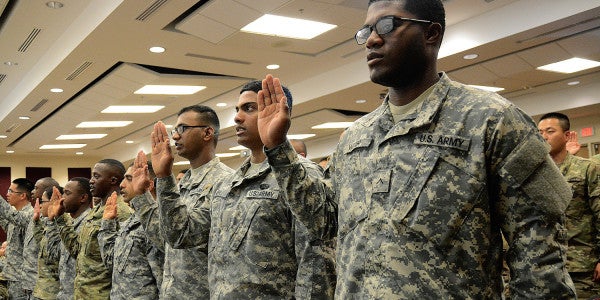 When discussing societal ills, people start talking about mandatory national service as a solution. A lot of this comes from the usual crowd of misanthropic veterans who think all of today's lazy and entitled Millennials and Gen Zers need military service to whip them into shape.

To see why mandatory service isn't a great idea, start with the term “mandatory.” It implies that everyone reaching a certain age will have to do something. In the last census, taken in 2010, there were just under 14 million people between 18 and 21 in the United States. Assuming a national service period of about two years, that would make about nine million people in such a program at any given time.

Even a one year term would mean over four million. Just for context, the total number of people in the U.S. military, including the guard and reserves, is just under two million. Some might say that various exemptions would lower that number, but that kind of defeats the whole purpose, doesn't it?

Assuming that the amount of supervision required is at least that of the officer-to-enlisted ratio of the Marine Corps (the least officer-supervised of the services), it would mean an additional federal workforce of nearly a quarter-million bureaucrats just to keep them in line. Call that massive program socialism or fascism depending on your bias, but it hardly seems like a good use of government resources.

With that in mind, even a modest one year mandatory national service program would require finding meaningful work for a group more than twice the size of the entire U.S. military. What the hell would that many people do?

Be in the military? Doing what, exactly?

The modern military doesn't have that many jobs just pointing rifles in the same direction anymore. Even if it did, each person in the military costs on average about $137,000 a year. That kind of money had better buy a whole lot of civic responsibility.

But, as is frequently pointed out, 71% of military-age youth aren't qualified for the military anyway. Why not put them to work doing mandatory civilian service instead? It's great to picture 19-year-olds selflessly tutoring underprivileged children or building a wall on the Mexican border, depending on your ideological bent.

But in reality, most 18-year-olds aren't qualified for meaningful work. Most of those conscripted high school graduates would be digging holes to fill with dirt from other holes. Lest you think that perhaps these young conscripts might revitalize our aging infrastructure, reflect on the fact that there are already things called construction companies. They don't want slave labor building roads. Even if we did turn young people towards shoveling asphalt, it hardly seems the character-building exercise that mandatory service advocates promise.

Voluntary service, on the other hand, is of great benefit to those who do it. The military already provides a place for those so inclined to serve their country in arms. But plenty of people may be open to other opportunities to serve.

There's a fair amount of study regarding nudges, where fairly small incentives can cause large changes in group behavior. The military does this already. For all its talk about selfless service, the military relies a lot on certain benefits to bring people in.

What if the Peace Corps offered the Post-9/11 GI Bill? How about AmeriCorps or Teach for America? For those who already have degrees, why not allow using the GI Bill to retroactively pay down college debt after individuals complete a prescribed period of service?

These programs currently have only a tiny percentage of the military's end strength. Their costs are trivial, and the growth capacity is huge. More importantly, they do not significantly displace other private or public agencies, but still accomplish a lot of good in the world, which is what service is supposed to be about.

Those programs do typically require additional education beyond high school to join. That said, aren't more educated youth the “elite” that currently aren't performing military service? Isn't targeting them for voluntary service an effective way to inculcate a culture of selfless service among future leaders of America?

Going beyond the GI Bill, there are other benefits currently offered only to military vets that might entice young Americans into other forms of service. The VA home loan benefit is probably the biggest, but things like job placement and federal hiring preference would be easy to provide without a huge budget outlay. These incentives would go a long way.

A relatively small investment could greatly expand alternative service programs. With a little creativity, there could be even more outlets for the young adults of America to serve. In exchange, we'd have a lot more people who have done some public service and carry those experiences forward for the rest of their lives.

Many vets jealously guard their unique benefits from military service as distinct from those doing public service in a civilian role. But if a military member spending an entire enlistment in the continental U.S. rates full military and VA benefits, certainly so does a Peace Corps volunteer in a remote region of the developing world. The key is that we encourage, or nudge, people to improve society and themselves at the same time.

The baseline tour of service is currently two years in the Peace Corps and Teach for America. It could be four in order to earn military-equivalent benefits, or those benefits could be pro-rated. Regardless, expanding the opportunity for public service would be a great thing, not just for the individuals doing the service, not just for the people they serve, but also for society.

Some might say that adding military-type incentives to these other programs might make them more mercenary, that people would join for the wrong reasons. That same critique should then be leveled at the military. Just like the military, some people would join for the benefits, but stay for a lifetime of service. If someone joins Teach for America to get money for a master's degree, but then decides to spend a lifetime teaching, it's money well spent.

After World War II, the original GI Bill made education available to the masses, changing America for the better. Social mobility in America has stagnated for years. Providing a new merit-based opportunity for more people to raise themselves up is a win for everyone, increasing GDP while improving our national culture at the same time. Some people complain about young people wanting free college.

Fine. Let's provide them more ways to earn it.

Too many people seek to make service an exclusive club that only a few can belong to. If we truly want to make this country better, we need to made public service an accessible option for everyone.