The Army may have hit this year’s recruiting goal, but the service still has a long way to go

Despite touting new initiatives, digital platforms, and marketing techniques (and lowering its goal by 12,000 in 2019 amid a more modest growth plan in the next five years), the Army is not in the clear yet 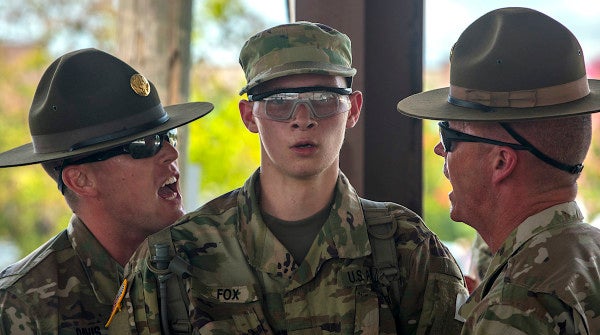 A year after missing its recruitment goals for the first time in more than a decade, the U.S. Army announced on Sept. 17 that it will meet its target of 68,000 new soldiers for the 2019 fiscal year.

But despite touting new initiatives, digital platforms, and marketing techniques (and lowering its goal by 12,000 in 2019 amid a more modest growth plan in the next five years), the Army is not in the clear yet. The service's new initiatives should be the expectation rather than considered innovative — and if the Army really wants to make good on its modernization promises, it has to ask hard questions about current processes

The Army's modern outreach initiatives have certainly seen initial success. Army representation in 22 cities without traditionally strong recruitment saw an average 15 percent increase in enlistments, according to U.S. Army Recruiting Command (USAREC), including a “double-digit lift with females and minorities” that increased the number of women in the Army by nearly an entire percent (17.1 to 18 percent). Many young women do not see themselves as having a role in the military, highlighting the importance of these gains.

In addition, surveys and micro-targeting on the neighborhood level allowed the Army to address some of the misconceptions that pervade societal understandings of military service. To wit: the Army put out digital billboards depicting a soldier at home with family members to address a common misconception among the Hispanic community that a soldier cannot go home to his or her family at night.

The Army has done great work updating and diversifying is outreach; these types of initiatives should be expanded, and the service should be celebrated for those successes. But while presence in different cities and increasingly-sophisticated digital outreach methods are critical steps for the Army to understand its market for future soldiers, they miss the point of what fundamentally drives enlistment: familiarity with service, adventure, benefits, and job stability. The national campaign, Warriors Wanted, remains a staid, standard depiction of Army jobs; the Army needs to move beyond it.

Part of the problem is structural: Leadership regularly mentions valuing and recruiting talent, though without making relevant investments to reflect this. Army Chief of Staff Gen. McConville stated that “we're committed to hiring the right people with the right talents,” yet the need for USAREC to “put 'em in boots” and lack of recruiter time or accountability makes this easier said than done. Currently, if a recruit needs a waiver, they can be perceived as less competitive while also creating time costs for the recruiter.

But there are also two major obstacles that stem from how recruiting is represented. First, that joining for benefits and skills is less respected. Muth said “educational benefits, trade skill credentialing, adventure and a way out of a small town are still the big reasons young people want to enlist.” But joining for the benefits is often derided for being “self-centered” rather than focused on “selfless service.” It turns out, most young people want work-life balance, opportunity for leadership, and flexibility in addition to a sense of meaning from their job. Selfless service, after all, will not make up for poor housing conditions, lack of childcare options, or spouse unemployment. Educational attainment is increasingly important for income potential and jobs, even as the cost of education increases, raising the importance of the GI Bill and other education opportunities.

Indeed, the narrative that the Army is “fighting a strong economy” remains a perennial excuse, missing the chance to show military service as an elite job that requires a key skills, high levels of education, and daily involvement national security challenges. The military's total compensation package is incredibly competitive against many industries; for those industries where military pay is less competitive, the military will have to rely on the unique opportunities it offers. Unfortunately, society as well as recruiters believe the Army gets the “best of the rest,” not only playing into misconceptions but possibly turning away people who want a challenge.

The second issue is that that waivers are an inaccurate measure of recruit quality. In fiscal year 2019, Muth said there were overall 9 percent waivers awarded, 3.4 percent fewer waivers than last year, but this number obscures built-in perversities: waivers are often used as a metric for the percentage of “high-quality recruits,” especially following the 2007 surge when the Army lowered standards and issued more waivers for education and drug-use. “Category IV” recruits who score low in the Army aptitude test are limited by law and in an increasingly high-skill, high-tech force, this is critical. The military should not be compromising educational attainment or ASVAB scores, which weakens the Army's competitiveness and often leads to negative repercussions down the road. However, a huge caveat to arguing a lower percentage of waivers awarded is directly equivalent to overall quality of recruits is that many disqualifying factors are perverse and some are downright silly.

Indeed, medical waivers are a significant chunk of Army disqualifications. While obesity disqualifies many from service, many other medical issues require a waiver to successfully join. These can include IBS and gastritis, childhood eczema or severe acne, a broken bone or fracture, congenital cataracts, seeking counseling, and more. Although disclosing these conditions is important, the services should provide greater guidance on which waivers are pro forma and should not diminish opportunities to join; consider making waivers automatic for non-active conditions; enable recruiters more time to work with recruits who may require waivers; and evaluate recruits holistically so waivers do not result in de facto dismissals.

Moral waivers cover criminal history and drug use. Although serious and consistent drug use should be a disqualifying factor, marijuana use is on the rise in the youth population. The military perspective on drug use is often explained as a desire for “law-abiding behavior” and “rule following,” however, the legal differences between state and federal drug laws may not be clear to potential recruits. By that measure, recruits who consumed alcohol younger than 21 years of age should also be required to get a waiver; further illustrating the perversities of current standards.

Recruiting is premised on quick turnaround between initial point of contact and the oath of enlistment. However, enlistment standards remain, fairly restrictive, and young people who have not planned to join the military since a young age may not be aware of the many disqualifying factors and may have experimented earlier in life. They may possess critical skill sets, high levels of education, or superior physical fitness achievements, but a history of seeking mental health assistance or trying drugs means the military is losing their capabilities. The lack of conversation about service harms youth and harms the military.

To remain competitive and to truly modernize recruiting, the Army in particular must consider how it is currently pushing away qualified talent. To do otherwise will only prove detrimental to building a fighting force.