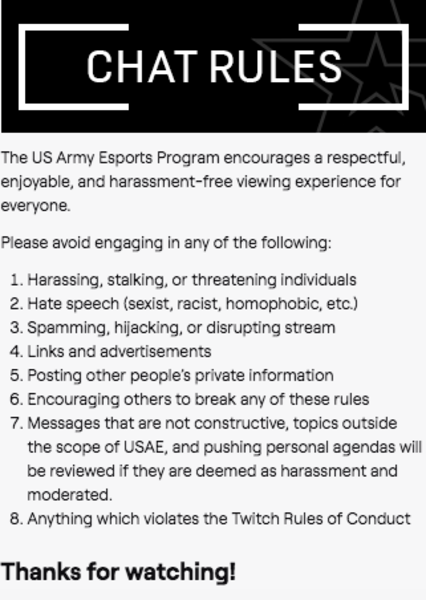 The Army would like to remind you that if you have any concerns about potential war crimes, you’re welcome to talk to your elected leaders — but please don’t ask their professional gamers about it.

The Army esports team — the darling of U.S. Army Recruiting Command — has found itself in hot water after banning Twitch viewers who trolled their online video game streaming sessions, which the Army uses to help recruit potential new soldiers, by asking their players about war crimes.

As a result, the Army has temporarily stopped the esports team from streaming on Twitch while the service reviews its policies and social media guidelines.

Vice’s Matthew Gault first reported that the Army’s esports team was blocking viewers on their Twitch channel, a streaming platform where people can watch the team play video games such as, in this instance, Call of Duty: Warzone.

A video posted by Rod Breslau, identified by Vice as an esports personality, shows them asking in the Twitch stream chat, “What’s your favorite U.S. war crime?” When they stopped being able to send that message because of the channel’s moderation settings, they resorted to asking “what’s your favorite u.s. w4r cr1me?”

The esports player, Sgt. 1st Class Joshua David — a Special Forces soldier — said that the viewers asking about war crimes were “little internet keyboard monsters,” adding that he wouldn’t “stand for that.”

“Have a nice time getting banned, my dude,” David said.

just having a good time with the US Army esports twitch stream @JordanUhl pic.twitter.com/qnjyxg1KP0

Jordan Uhl, a progressive activist, was asking some of the questions. While Uhl conceded in The Nation magazine that while he may have been undiplomatic in his line of questioning, the military “shouldn’t be able” to use “one of the world’s most popular platforms to recruit kids … without some pushback.”

Uhl later told Vice that “at a base level, it’s trolling,” adding that he found it interesting that the Army was “being aggressive with removing any incidences of U.S. war crimes in what is essentially a recruiting tool for the military.”

Various legal experts have since weighed in on the controversy, stating that the U.S. military blocking people from saying certain things on the platforms they use may constitute a violation of viewers' First Amendment rights.

“The government can’t try to engineer the conversation of the public by saying only people who agree can respond,” Katie Fallow, a senior staff attorney at Columbia University's Knight First Amendment Institute, told the Washington Post.

Vera Eidelman, a staff attorney for the American Civil Liberties Union’s Speech, Privacy and Technology Project, told Vice that it “looks like what happened was a violation of the First Amendment.”

The Army, however, doesn’t see it that way. Kelli Bland, a USAREC spokeswoman, told Task & Purpose in a statement that the esports team does “not regulate viewpoints of participants.” But Bland also said that the Army “may reasonably regulate the time, place, and manner of discussions on its recruiting social media sites.”

She later clarified that the esports members didn’t ban viewers “because of viewpoints, they banned them for behavior intended to harass, degrade and intimidate, which violates the Twitch community guidelines.”

Bland added that, if citizens are “genuinely concerned” about war crimes, there are “numerous Freedom of Information Act (FOIA) reading rooms for investigations into alleged war crimes.”

“Citizens are also free to engage the Army via their elected representatives in Congress who maintain oversight of the Army,” Bland said. “Military leaders participate in public forums throughout the United States, and even the world, to discuss military operations, including holding Service members accountable in armed conflict — this information can be found throughout the public domain.”

On the Army esports Twitch channel, a user agreement says that the Defense Department “reserves the right, but undertakes no duty, to review, edit, move or delete any material submitted as a comment to the information provided for display or placed on the social media sites in its sole discretion, without notice.”

That disclaimer was added to the Twitch channel on July 14, Bland said, though the channel’s chat rules — which asks viewers to avoid things like spamming, hate speech, harassment, and messages about topics that are “outside the scope of USAE” — have been on the channel since it was created.

It’s not just the Army dealing with this issue. According to Vice, the Navy also banned Twitch users who asked about war crimes and former Navy SEAL Eddie Gallagher, who was convicted last year of posing in a photo with a dead ISIS fighter.

But the banning ordeal isn’t the end of the Army esports team’s woes. Uhl also alleged in The Nation that the organization was advertising a fake giveaway, which when selected would direct users “to a recruiting form with no additional mention of a contest, odds, total number of winners, or when a drawing will occur.”

The Army says that claim is inaccurate. On Monday, the USAREC Twitter account sent out a tweet to correct “the rumor mill,” saying that the esports giveaways “are real.”

Bland told Task & Purpose on Tuesday that the esports team uses goarmy.com for the giveaways, and that participants who click through the goarmy.com landing page “and fill out the virtual information card are entered for a chance to win.”

“While the web form may look the same externally for all events, each and every activity has its own code in the background,” Maj. Gen. Frank Muth, head of USAREC, said in a press release. “On the surface, for things like giveaways, this allows us to ensure the right individuals are entered into a drawing, and from a strategic perspective, it gives us the ability to see which activities work and which ones don’t.”

Bland said that the team is now “exploring options to use platforms for giveaways that will provide more external clarity.”

The esports team was launched in 2018, and quickly became the pride and joy of the service’s renewed recruiting push. It became even more important in recent months, as in-person recruiting was made more difficult, and at times impossible, in the wake of the novel coronavirus (COVID-19).

In September, Muth told reporters that the Army believed esports and “the digital plane” was going to “become the number one lead generator” for potential new soldiers.

Related: The Army wants more soldiers, and it's using esports to put a 'finger on the pulse' of potential recruits

David, the Green Beret who did not take kindly to being asked about war crimes by folks online, told Business Insider that the esports team is just “like a normal unit” in the Army — they start the day with PT, get breakfast, and get to work.

Only their work is “either practicing our game and creating content for Youtube or whatever social media platform.”

Bland said that the esports team allows soldiers “to be more relatable and educate young people about who they are and what they do in an authentic way.”

“With 50 percent of youth admitting to knowing little to nothing about military service, the Army’s Esports Team aims to bridge the gap with the public and engage eligible Americans about the benefits of service,” Bland said.

Muth said earlier this month on ThinkTech Hawaii that esports is nothing more than “an avenue to start a conversation.”

“None of our players goes into any of these conventions or goes onto a site at night … nobody goes in there and says ‘Hey, you know, I’m a recruiter, come join the Army.’ That’s not what we do,” Muth said. “What we do is we just go out there and we have a shared passion for esports, and we share that passion with the youth of America out there today, and it naturally devolves into a conversation of ‘What do you do?’ ‘Well, I’m in the Army.’”